President Donald Trump and Republicans on the House Intelligence Committee went out of their way to comment on a witness’s clothing choices and rank during Tuesday’s impeachment hearing.

“I see you’re wearing your dress uniform, knowing that’s not the uniform of the day,” said Stewart. “You wear a suit to the White House.”

He then backtracked slightly and, proudly pointing to his father’s Air Force wings, cast Vindman’s attire as “a great reminder of his military service,” before again attacking Vindman ― this time for his rank.

“I’m curious, when the ranking member referred to you as Mr. Vindman, you quickly corrected him and wanted to be called Lt. Col. Vindman,” he said. “Do you always insist on civilians calling you by your rank?”

As the lieutenant colonel explained why thought it was appropriate to wear his dress uniform, Stewart interrupted him. When Vindman continued, saying he’d been attacked and marginalized as a military officer in the press and on Twitter, the congressman interrupted him again. 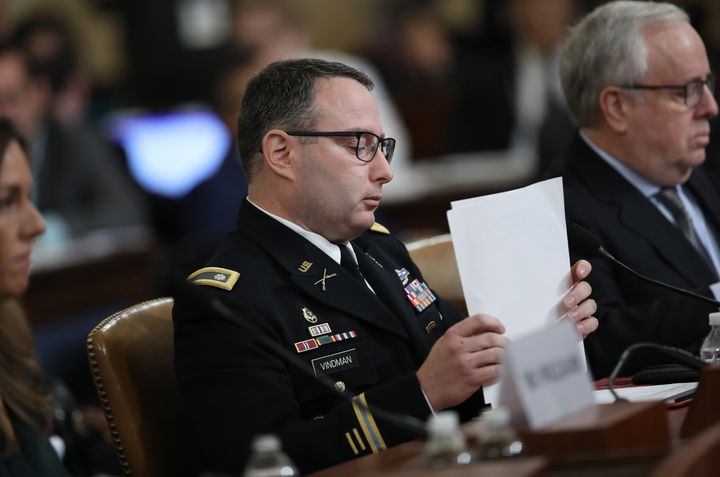 After the hearing, Stewart told HuffPost he hadn’t meant to imply that Vindman shouldn’t have worn his uniform.

“How could you interpret that way? I was saying it’s a great reminder of his service,” Stewart said. “I don’t know how you could interpret it any other way.”

Another member of the Intelligence Committee, Rep. Mike Conaway (R-Texas), said it was appropriate for Vindman to wear his uniform but also that he did it for effect.

“He’s an active duty member of the military and certainly there’s nothing wrong with him wearing the uniform,” Conaway said. “I think he was doing it for effect. He doesn’t wear it daily at the White House. But he’s clearly earned the right to wear it.”

President Trump also repeated the attack in a mid-hearing statement to the media, giving the appearance of a concerted Republican push:

“I don’t know, as he says, ‘lieutenant colonel’ ― I understand someone had the misfortune of someone calling him ‘Mr.’ and he corrected them,” Trump said, seeking to distance himself from the testimony.

“I never saw the man,” he continued. “I understand now he wears his uniform when he goes in. I don’t know Vindman at all.”

Vindman is a Harvard-educated officer who served multiple overseas tours in South Korea, Germany and Iraq, where he was injured by a roadside bomb, for which he received a Purple Heart. He emphasized that military service in his opening statement.

“For more than two decades, it has been my honor to serve as an officer in the United States Army,” he said Tuesday morning. “As an infantry officer, I served multiple overseas tours, including South Korea and Germany, and I was deployed to Iraq for combat operations.”

5 Rights We Wouldn't Have Without Ruth Bader Ginsburg