Our democracy hangs by a thread. We are Democrats — five former members of Congress and two recent House candidates — who are uniting to help save it. Our plan is to counter the torrent of lies that helped cost us our elections in 2020. We know these attacks are coming again, and they endanger the republic.

Just eight votes separate the parties in the U.S. House of Representatives. With a shift in a handful of the 435 House districts, the speaker’s gavel would fall to Rep. Kevin McCarthy, R-Calif. This is a man who, hours after the U.S. Capitol was attacked by a violent mob seeking to overturn the results of a free and fair election, joined two-thirds of House Republicans in supporting the biggest lie of all. That Jan. 6 House vote to reject President Joe Biden’s wins in Arizona and Pennsylvania reminds us that some will sacrifice anything — truth, honor and even the most sacred tenets of our democracy — to grasp at power.

We are all proud capitalists

The GOP does not plan to try to retake the House in 2022 on the strength of its ideas. Rather, Republicans intend to lie about Democrats. This is not a secret: They’ve issued memos, been quoted in the news media and posted their strategy on social media. And it is familiar to us because it is a reprise of the war plan Republicans used against us in 2020: Connect swing-district Democrats, most of whom are moderates, to ideologies, policies and slogans that they reject.

Let’s start with ideology. All of us are proud capitalists. We believe that a properly regulated market economy with a powerful social safety net is the surest way to ensure economic opportunity. And we know that socialism has been a failure everywhere it has been tried. Nevertheless, Joe saw his moderate agenda attacked as “socialism at its best” in his South Carolina district. Socialism isn’t so popular in Utah, either, which made potent the charge that Ben supports an “extreme socialist agenda.” 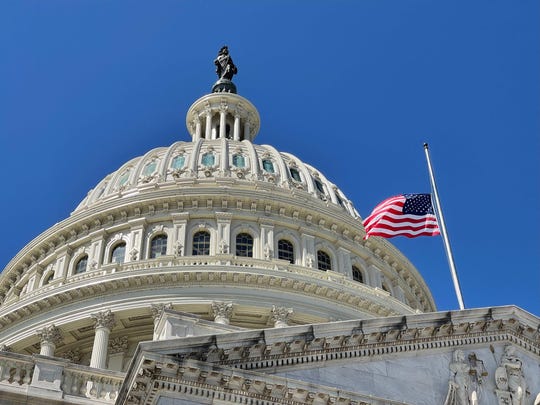 Next were ideas. We all agree that climate change is an existential crisis, and we have fought hard for a robust set of policies to address it. But we don’t believe that banning hydraulic fracturing is the quickest, most equitable route to a clean energy future. Nevertheless, those of us running in districts dependent on those industries were said to support such a ban. This malarkey was devastating to Xochitl, who represented an oil patch New Mexico district. And Kendra, hailing from another slice of oil country, faced similar fabrications.

Stacey Abrams: Pressure corporations to stand up for voting rights and against voter suppression bills before moving to boycotts

Even the slogans took their toll. All of us were deeply moved by the racial justice protests of 2020 and believe that we must take bold steps to bring real change to law enforcement. But none of us would literally “defund the police.” That didn’t stop the GOP, which beat Anthony in an upstate New York district by just 109 votes, from falsely accusing him of trying to do just that.

Shielding moderates most at risk

To be sure, there are Democratic members who hold these views. They are as sincere in their beliefs as we are in ours, and while we largely agree on broad Democratic goals, we have principled disagreements on some big policies.

But those members, representing safe, deep blue districts, are not in the crosshairs of Republicans in 2022. Instead, the targeted Democrats are moderates in purple swing districts like ours. Many first came to Congress with us in 2018. They must convince swing voters, who don’t yet know them well, that they represent their districts’ values. The GOP already has spun up its attack machine to lie about those members, as they did about us. Unless their voters learn more about them, those lies could take hold.

That’s why we are teaming up to do something about it. We helped create and now serve as advisers to Shield PAC, a new political action committee to define and shield the most at-risk House moderates from Republican efforts to tie them to socialism and other ideas that are toxic in their districts. Shield PAC will be in their districts early and for the long haul, working to ensure that voters know who these members are and what they do — and do not — believe in and fight for every day in Congress.

Republicans will lie about these members because it worked against us and because they have nothing else to run on. Four years of Donald Trump hollowed out their party. They have abandoned their long-held principles, they have no new ideas and they have no record of success. With Shield PAC, we seek to learn from the damage done to us by ensuring this cynical strategy doesn’t take a toll again in 2022.