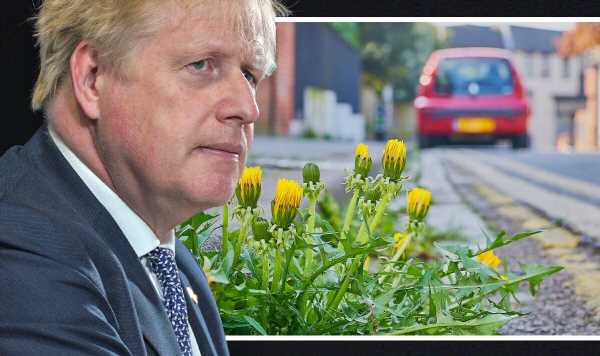 How to remove weeds and moss from lawns

Brighton and Hove City Council banned weedkiller and is now offering to provide residents with tools to weed their overgrown pavements. It said the plants were proliferating because of staff shortages which, almost six years on, it pinned primarily on the decision to leave the European Union.

The council this week admitted in a statement “there are definitely more weeds on pavements than we’d like there to be at the moment”.

In 2019, it started a process of becoming a pesticide-free city by halting the use of glyphosate.

This, it highlighted, “causes cancer in humans while destroying the environment and wildlife”.

The “key problem” causing plant proliferation and long grass on verges was, however, staff shortages.

It said: “Unfortunately, we have only managed to recruit nine of the 26 seasonal staff we would normally take on to deal with the increased amount of weeding needed during the spring and summer months.

“As many of our seasonal staff used to come from European countries for the summer, the ability of European nationals to work in the UK after Brexit, alongside the pandemic, is continuing to have an impact on our recruitment.”

In a 2020 statement on the management of weeds, however, the council only referred to lockdown when highlighting delays.

It said during a September Environment, Transport and Sustainability Committee: “I do have to inform you that the weeding and deep cleaning schedule has been badly impacted upon by the Covid pandemic and effects of restrictions and lockdown.

“As I’m sure you will understand cleansing operatives were also diverted to cover staff who had to self-isolate.”

The UK’s withdrawal from the Brussels bloc was not mentioned in this release.

In order to deal with current overgrowths, Brighton and Hove City Council said it will promote “voluntary and community group weeding”.

DON’T MISS:
Hated Brexit deal ‘could shatter UK’ [OPINION]
Farage blasts those blaming conflict in Ukraine for inflation [NEWS]
Britons blast Tories and Labour who are ‘as bad as each other’ [OPINION]

To help to this, it offered to “provide advice, tools and support”.

One homeowner from the area said the scheme suggested the council has “lost the plot”.

They, quoted in MailOnline, argued: “The council has used all sorts of excuses from Covid to staff shortages but the reality of it is that if they were to reintroduce controlled use of some herbicides then we wouldn’t have this problem.

“To ask residents to weed their own streets shows they have really lost the plot.

“What do we pay taxes for?”