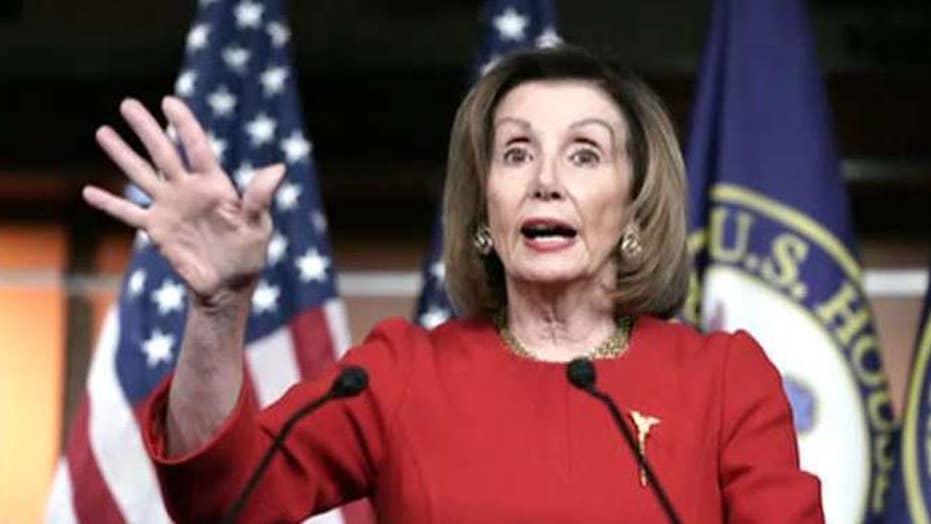 The House speaker is pushing for subpoenas to be issued for additional witnesses and documents; Garrett Tenney reports from Washington with the response from Republicans.

House Speaker Nancy Pelosi signaled to congressional Democrats late Tuesday that she plans to continue to hold onto articles of impeachment against President Trump — for now – demanding that Senate Majority Leader Mitch McConnell first release the resolution outlining the terms for a Senate trial.

In a letter to colleagues, Pelosi, D-Calif., indicated she would not transmit impeachment articles to the Senate until McConnell moves to “immediately publish” the resolution while accusing him of making “misleading claims” about past impeachment processes to “justify” Republican plans.

“Sadly, Leader McConnell has made clear that his loyalty is to the President and not the Constitution,” Pelosi wrote. “Leader McConnell has insisted that the approach under consideration is identical to those of the Clinton trial and that ‘fair is fair.’ This is simply not true.”

Democrats have pushed all along for Republicans to agree to call certain witnesses as part of the Trump impeachment trial, while McConnell has called to first start the trial — and settle on issues like witness testimony later.

Both sides are digging in, but the latest statements seemed to leave an opening for the process to eventually move forward — though it's unclear who will make the next move.

Pelosi suggested the House could appoint impeachment "managers" and transmit the articles once McConnell releases the resolution. Meanwhile, McConnell said Tuesday that Republicans “have the votes” to begin an impeachment trial, even without an agreement on potential Democrat-sought witnesses—once the chamber receives the articles from the House. McConnell also said Tuesday that GOP leadership would share the resolution to govern the trial, once it is unveiled.

McConnell indicated the Senate could kick off “phase one” of Trump’s impeachment trial, after notifying Pelosi that he has a simple majority and can proceed.

“Fifty-one senators determine what we do and there will be, I’m sure, intense discussion, once we get past phase one, about the whole witness issue,” McConnell said, while also insisting that the Senate first receive the articles from the House.

Senate Minority Leader Chuck Schumer last week defended his party's efforts to seek high-level witnesses and documents amid new reports of what occurred inside the administration at the time of the decision to freeze millions of dollars of military aid to Ukraine. Schumer said it is imperative to learn the "whole truth," while voicing concern McConnell could end up holding a "mock trial."

“Never, never in the history of our country has there been an impeachment trial in which the Senate was denied the ability to hear from witnesses, yet the Republican leader seems intent on violating that precedent and denying critical evidence to this body and to the American people,” Schumer said, adding that McConnell has “no intention to be impartial.”

The House, last month, voted to adopt two articles of impeachment against the president—abuse of power and obstruction of Congress. Pelosi, after the vote, said she wanted reassurances that the Senate would hold a fair trial before sending the articles.

If and when Pelosi transmits the articles to the Senate, she would pick Democratic House impeachment “managers” to prosecute the case against the president.

Last month, bipartisan sources told Fox News that several names have been floated to make the case for the president’s removal.

Likely candidates include House Intelligence Committee Chairman Adam Schiff, D-Calif., who led much of the impeachment inquiry out of his committee with dramatic hearings to develop the case against the president; House Judiciary Committee Chairman Jerrold Nadler, D-N.Y., whose panel drafted the articles of impeachment; House Democratic Caucus Chairman Hakeem Jeffries, D-N.Y.; and Rep. Jamie Raskin, D-Md., a constitutional lawyer.

Other possible candidates include Democrats who were more outspoken during the impeachment hearings like Rep. David Cicilline, D-R.I., and Eric Swalwell, D-Calif. Sources told Fox News that other names being floated include Reps. Pramila Jayapal, D-Wash.; Val Demings, D-Fla., who served as the first female police chief in Orlando; and Zoe Lofgren, D-Calif., who was involved in the impeachment of former President Bill Clinton and was a staffer during the congressional investigation into former President Richard Nixon.

During Clinton’s impeachment in 1999, there were 13 House impeachment managers. A source familiar with the planning told Fox News that Pelosi is expected to appoint fewer than that.