WASHINGTON — President Bill Clinton, newly elected and eager to fulfill a central campaign promise, moved in 1993 to end a ban on gay men and women in the military, but he was stymied by senior military officers, who coordinated with a deferential Democratic senator, Sam Nunn of Georgia.

More than 15 years later, Mr. Clinton’s messy compromise, “don’t ask, don’t tell,” was repealed, but only after a new generation of senior Defense Department officials told a hushed panel of reverent senators that the time had come.

The military’s relationship with its civilian masters is regularly strained, as it was under Presidents Barack Obama and Donald J. Trump. But now, increasingly, it is lawmakers from both parties who are telling “the generals” how things are going to be, and less the other way around.

Senator Kirsten Gillibrand, Democrat of New York, has amassed scores of supporters needed to pass a bill that would break with tradition and remove military commanders from a role in prosecuting service members for sexual assault, after years of failing to win sufficient support in the face of Pentagon opposition.

Lawmakers on both ends of the political spectrum have increasingly joined forces to curtail the military. They are pushing their prerogatives on the president’s powers to declare war, on troop levels overseas and on engagements in places like Syria, recently bolstered by President Biden’s decision to withdraw fully from Afghanistan, against the wishes of military leaders.

It was Congress that finally pushed the Marine Corps to integrate women in its training platoons, and lawmakers recently told Army generals to halt a fitness test that they deemed unfair to female troops.

The shift from reverence to skepticism in the legislative branch mirrors broader societal frustrations after two decades of wars, a pervasive problem of sexual assault and harassment of female troops — underscored by a grisly killing last year of a female soldier at Fort Hood — and the exposure of political extremism in the ranks.

This month, a group of retired admirals and generals caused an uproar after signing a letter questioning Mr. Biden’s fitness for office and hinting that the 2020 presidential election may have been fraudulent, drawing further critiques of military leaders straying far outside their responsibilities.

“People in D.C. have a pretty strong political antenna, and it may be that the military brand is not what it used to be,” said John Gans, who was the chief speechwriter to Ashton B. Carter when he served as defense secretary.

The turn is most striking among Republican lawmakers, who have been reliably deferential to military leaders. For example, they strongly backed Gen. David H. Petraeus, the top American military commander during the Iraq War, when he gave his deeply anticipated progress reports to Congress.

Today, such four-star appearances are met with less enthusiasm and regard. 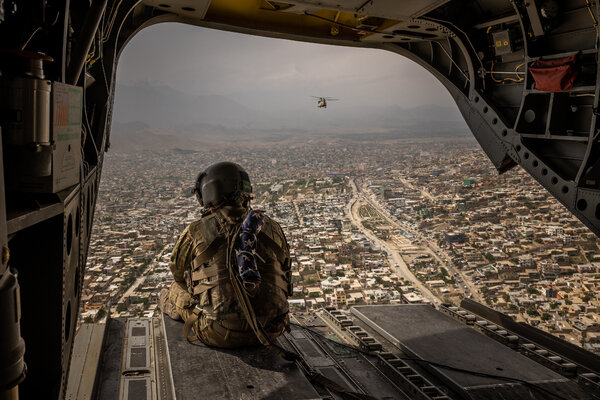 “You can only hear a general say we are turning the corner so many times,” said Representative Peter Meijer, Republican of Michigan and a veteran of the Iraq War. “What we are seeing now is not a kneejerk deference to senior military officials, but a responsibility to exert civilian oversight over military leaders. I frankly think that blanket deference has been shown to not be to the benefit of the Department of Defense or our system, which is predicated on civilian control.”

The last two presidents have set some of this tone. One of Mr. Obama’s early actions was to relieve Gen. David D. McKiernan as the commander in Afghanistan, the first top wartime commander to be dismissed since Gen. Douglas MacArthur during the Korean War. Mr. Obama then tangled with his successor, Gen. Stanley A. McChrystal, who was fired after aides were quoted disparaging the administration in a Rolling Stone article. Joseph R. Biden Jr., then the vice president, often advised Mr. Obama that military leaders were trying to box him in.

Even so, Mr. Obama approved a significant troop surge for the Afghan war effort — although some senior civilian advisers, including Mr. Biden, had pressed for a narrower military campaign that focused on counterterrorism. Many in the Obama White House also privately expressed outrage that the Pentagon quietly lobbied allies in Congress to support the troop increase, which Mr. Obama’s advisers viewed as an end-around maneuver to pressure the president.

During his four years in the White House, Mr. Trump repudiated military brass, often disdained their advice while trying to enlist them in politics. Gen. Mark A. Milley, the chairman of the Joint Chiefs of Staff, was criticized when he joined the president in a walk from the White House to a church in his camouflage uniform after police violently cleared protesters from the streets.

General Milley later apologized, strongly. But the uniformed military, led by General Milley and the Joint Chiefs of Staff, also successfully pushed back on several significant initiatives by Mr. Trump — a full troop withdrawal from Syria, his musings on bombing Iran’s nuclear facility in Natanz and deploying active-duty troops in the capital during the protests last year.

Military leaders have largely been steadfast in their desire to keep troops in various theaters of war — namely Afghanistan and Iraq — that Congress increasingly lost patience for in recent years.

“When I first arrived in Congress, there was extraordinary deference to generals,” said Ms. Gillibrand, who has served on both the House and Senate Armed Services Committees since she was elected to Congress in 2006. But after multiple trips to the region, she said, “We have been able to see the disconnect between what we were being briefed on and what we saw with our own eyes. There is a willingness now for members to use their own judgment.”

Indeed, Representative Liz Cheney of Wyoming was ousted from her Republican leadership position over her persistent attacks on Mr. Trump. But her hawkishness, once Republican orthodoxy, was increasingly out of step with her party, polls have shown.

“Cheney stuck to the George W. Bush view of American foreign policy long past when the Republican base had shifted to support greater realism about things like our seemingly endless wars in the Middle East,” said William Ruger, the vice president for policy at the Charles Koch Institute, which has long pushed to end overseas conflicts.

Senator Tim Kaine, Democrat of Virginia, has spent nearly a decade trying to build bipartisan support for Congress to exercise more oversight into the nation’s combat engagements overseas. In this Congress, he has gained the largest number of supporters he has ever had for related legislation. His bill to repeal war authorization laws has 15 co-sponsors, including five Republicans from a diverse ideological perspective. Similar measures over the years have attracted one to a handful of partners, often with no Republicans on board. The House is on a similar track, after years of only a few members supporting such actions.

Mr. Kaine said the nearly 20 years since the events of Sept. 11, 2001, have greatly accelerated his efforts to repeal and replace the authorizations for the ensuing wars, but so has year upon year of frustration with the executive branch on its military overreach. “The farther you get out from 2001 and 2002, the fewer members of Congress ever voted for these authorizations,” he said.

Congress also has become more interested in examining long-held positions by military and diplomatic officials that have yielded few new results, a point Mr. Kaine has made in several recent hearings. “We have to get out of saying the same thing over and over again,” he said, “because the results are showing that it wasn’t working to deal with sexual assault, it has not been working in some of these military engagements and it is not necessarily working in some other areas.”

“Let’s get out of the platitude mode,” Mr. Kaine added.

There are perhaps few areas in which Congress has more openly rebuffed generals than in the current movement to overhaul the way the military handles sexual assault cases by taking them outside the chain of command and assigning them to military prosecutors. While Ms. Gillibrand and others have pushed for such a system for years, a majority in Congress have accepted military leaders’ contention that such a shift would undermine discipline.

But Ms. Gillibrand now has more votes than she needs to pass such a measure, including among those who once voted against her proposal, and she has recently brought on Representative Michael R. Turner, Republican of Ohio, to champion a companion measure in the House.

“Senator Gillibrand has the opportunity to do something too rare today in Washington: deliver on a transformative, bipartisan and bicameral solution,” Mr. Turner said.

Such changes — as well as those pushed by Congress to better integrate women into all aspects of combat and military life — reflect broader societal shifts, too, since the military, as ever, mirrors American culture.

“These things are all connected,” said Chuck Hagel, a former Republican senator who served as defense secretary under Mr. Obama. “Who makes the decision to send men and women to war? Who makes the judgment on their conduct? That has to come from society. It’s how we live and respond to each other.”

While Republicans should be expected to fight with Democrats over Pentagon funding and other national security issues going forward, the era of pushback against the omnipotence of generals now seems baked into the culture of Congress.

“I still have a lot of respect for our generals and admirals,” said Senator Susan Collins, Republican of Maine, who was among the first to confront — and be rebuked — by military leaders on issues of sexual assault.

“But I think one has to recognize that despite their experience, training and good intentions, they’re not always right and that there is more willingness now to challenge them, rather than to just accept their analysis,” she added. “Because as many will admit, they haven’t been right.”