Almost half of all Tory members now believe that Rishi Sunak would make a better leader and could win more seats at the next election than Boris Johnson, an exclusive poll for Sky News has found.

A third of the Tory membership now think Mr Johnson should stand down as Tory leader. Almost four in 10 say they think he is doing a bad job.

Both findings mark a substantial increase in disaffection amongst members of the Conservative Party compared to the early stage of the pandemic. 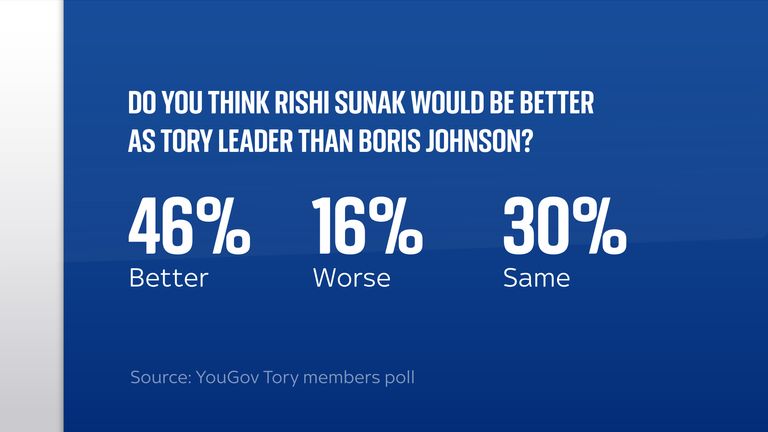 The results come in a YouGov poll of 1,005 Tory members for Sky News conducted between 30 December and 6 January, the first such survey since July 2020.

What else does the poll reveal?

The data reveals how the overwhelming enthusiasm for Mr Johnson in the first year of his premiership is now waning, with members questioning whether Mr Sunak, the chancellor, or Foreign Secretary Liz Truss may be a better prospect in Number 10.

Problematically for Mr Johnson, his reputation as a vote winner is now being challenged by his own party, with less than a quarter of members saying the prime minister would be more successful than Ms Truss at the next general election, and just 16% saying that he would perform better than Mr Sunak 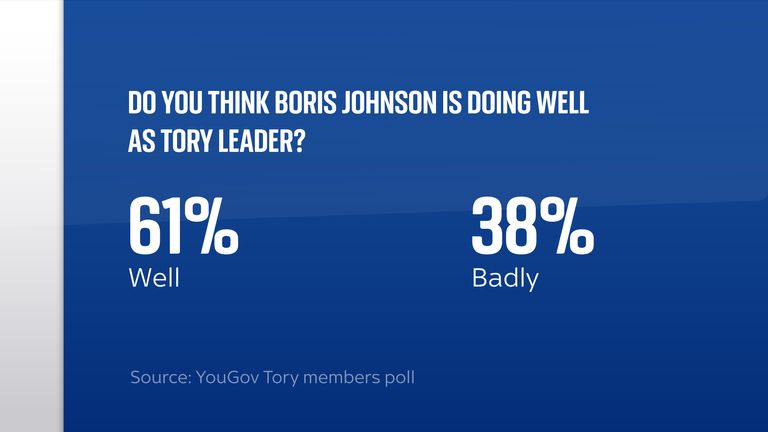 The poll found that the proportion who think Mr Johnson is doing “well” as prime minister has dropped from 85% in July 2020 to 61% today, while the proportion thinking he is doing “badly” increased to 38%, up from 5%.

In a sign that questions about the PM’s probity are starting to affect the view of the Tory membership, 39% say he cannot be trusted to tell the truth, not much less than the 45% who say he can be trusted with the truth. 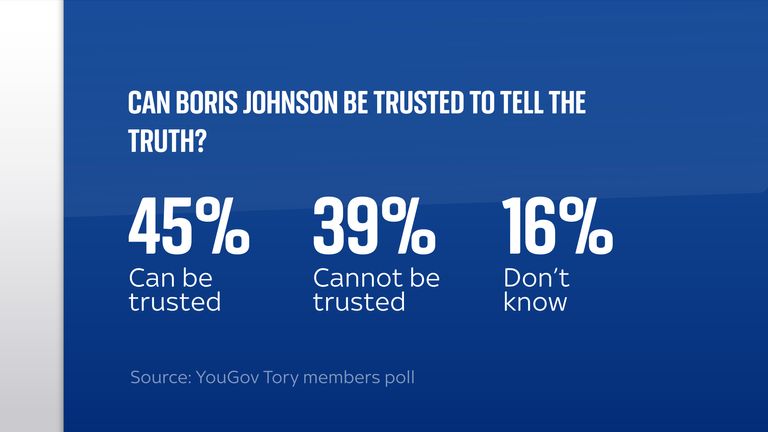 This has translated into questions amongst Tory party members over whether Mr Johnson should stay in office. 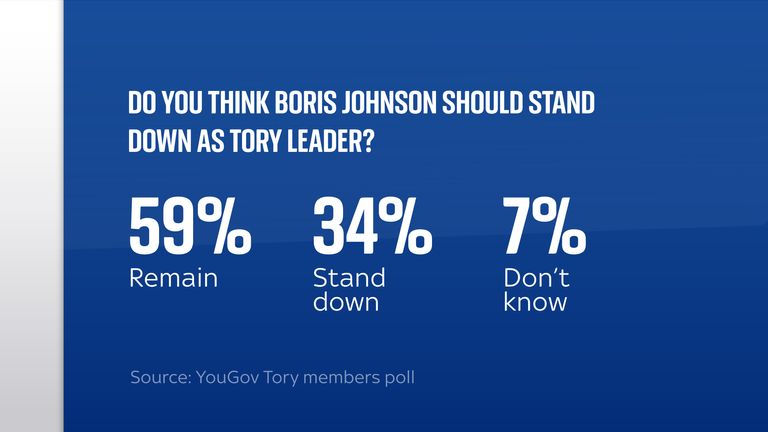 Regardless of their individual view, there are clearly doubts Mr Johnson will make it to the next election in 2023 or 2024: 47% say he is likely to be leader next time the country goes to the polls, 45% say it is unlikely. 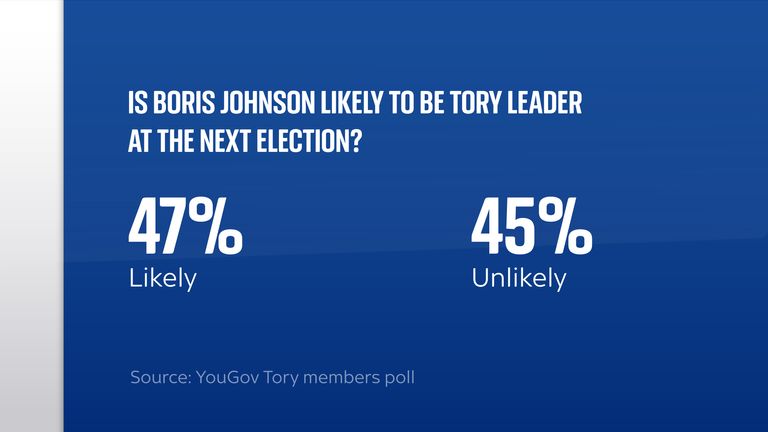 Who do party members think should replace the PM?

Asked who they want to replace Mr Johnson in the event he stood down, only Mr Sunak and Ms Truss appear a long way ahead of possible rivals.

The chancellor comes top with 33% of the vote, Ms Truss on 25%, ex-foreign secretary Jeremy Hunt 8%, Levelling Up Secretary Michael Gove 6%, Sajid Javid 5% and Priti Patel joint with Dominic Raab on 4%. 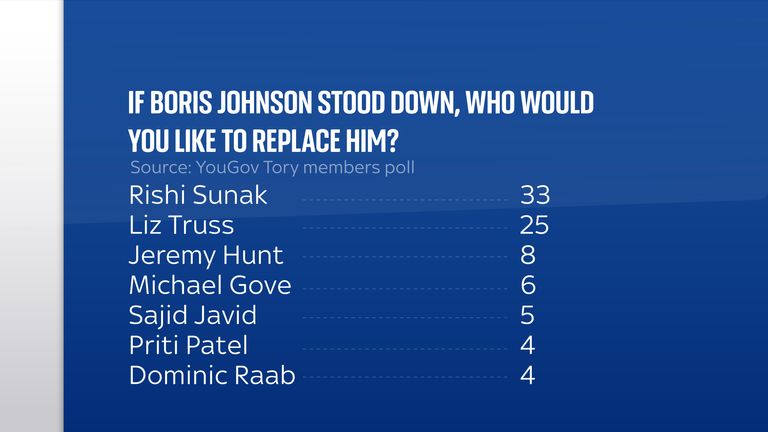 A total of 46% of Tory members think Mr Sunak would be a better Tory leader than Mr Johnson, and only 16% worse, with identical proportions – 46% – thinking he’d do better than Mr Johnson against Labour in an election.

Ms Truss fares almost as well: 39% think Ms Truss would be better than Mr Johnson and 22% worse, with 33% thinking she’d do better against Labour at the next election and 24% worse. 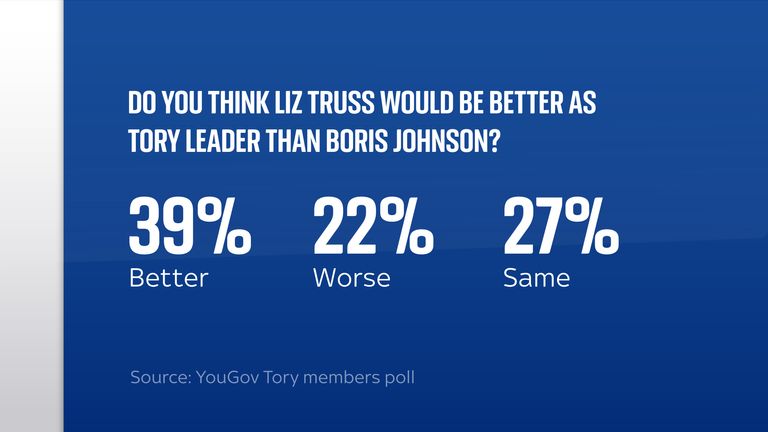 Ms Truss fares better amongst Brexit voters than Mr Sunak, but the chancellor, who supported Brexit in 2016, appears to be able to appeal to Tory members who voted Remain.

A total of 63% of Tory members who voted Remain think Mr Sunak would be a better Tory leader than Mr Johnson, with only 6% saying he would be worse.

Mr Sunak also scores very strongly amongst members in Scotland and Wales, and does best amongst the under 50s.

Ms Truss does much better amongst men than women.

Lates News:
2022-01-09
Previous Post: Walensky says Sotomayor's pediatric COVID hospitalization number was off 96.5%
Next Post: Dear Boris, stop being a shambles and fix things or admit being PM is too much for you and quit, yours Piers Morgan