Ministers defend PM over hosting Christmas quiz: Is it really that bad? 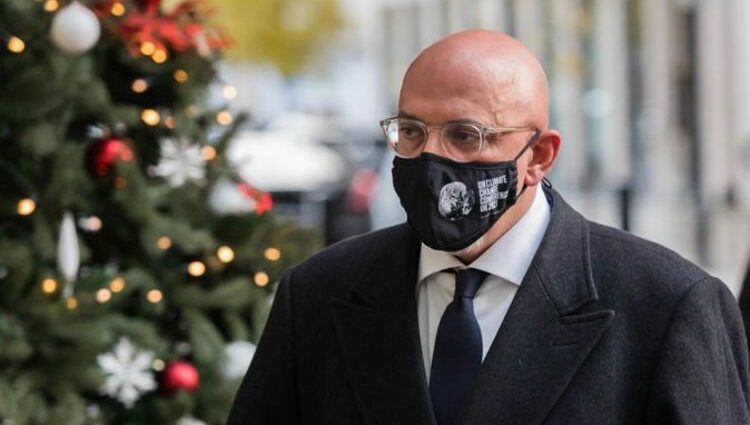 Education Secretary Nadhim Zahawi denied Mr Johnson had broken any Covid rules by taking part in the festive activity. Mr Zahawi spoke out after an image was published that shows the PM on a computer screen, sitting in front of a laptop in the Number 10 library, alongside two colleagues, one of whom is draped in tinsel. Reports claim many staff who also took part and drank alcohol were huddled by computers in other Number 10 rooms.

The quiz took place on December 15 last year, three days before an alleged rule-breaking Christmas party in the building.

That event is currently being investigated by Cabinet Secretary Simon Case.

Downing Street said the PM “briefly took part virtually” to thank staff for their work during the pandemic.

Rallying around the PM, Mr Zahawi blamed “hype” created by the media for the parties row and said that “people can make their own mind up” about the photo, published by the Sunday Mirror, of the Christmas quiz.

Speaking to Sky News, he said Mr Johnson had been on “a virtual call respecting the lockdown rules,” adding: “Many people would have had similar Zoom quiz nights around the country.

“People will look at that picture and think, hold on a second, he is on a virtual call with no alcohol… is that really a terrible crime?”

But Labour leader Sir Keir Starmer said he thought Mr Johnson had breached rules in place in London on December 15. In the photo, Mr Johnson is sitting in the Number 10 library between a male colleague wearing a tinsel scarf and a female one apparently in a Santa hat.

Multiple sources revealed last week that there was a Christmas quiz for Downing Street staff, ­with invites sent out in advance ­via email.

London was under Tier Two restrictions at the time, which banned mixing of households indoors – apart from support bubbles – and allowed a maximum of six people to meet outside.

Official guidance said: “Although there are exemptions for work purposes, you must not have a work Christmas lunch or party, where that is a primarily social activity and is not otherwise permitted by the rules in your tier.”

Asked whether he thought the PM was in breach of the Covid legal restrictions, Sir Keir told Andrew Marr: “It looks as though he was.

“He must have known that other groups were in other rooms in his own building,” he added, calling the quiz a “social event”.

Meanwhile, the Department for Work and Pensions has confirmed that a “core team” of staff drank alcohol and ate takeaways “on a number of occasions” while working late in the office when Covid restrictions were ­in place.

Last Friday, Downing Street cancelled its 2021 Christmas party, as fury mounted over a different gathering on December 18 last year after London had been put under Tier Three restrictions.

Those rules banned gatherings ­of two or more people indoors unless it was “reasonably necessary” for work.

After criticism from opposition parties, the media and his own MPs, the PM asked Cabinet Secretary Simon Case to carry out an investigation into the December 18 party.

The inquiry will also include finding out what happened at another Downing Street gathering on November 27 last year, and another at the Department for Education on December 10.

No10 adviser Allegra Stratton quit her post ­as a Government spokeswoman ­on Wednesday after a backlash over a video she appeared in ­­from last December, ­in which ­­she joked about a Christmas party.