Michelle Obama Weighs in on Meghan Markle’s Interview: ‘I Just Pray That There Is Forgiveness’ 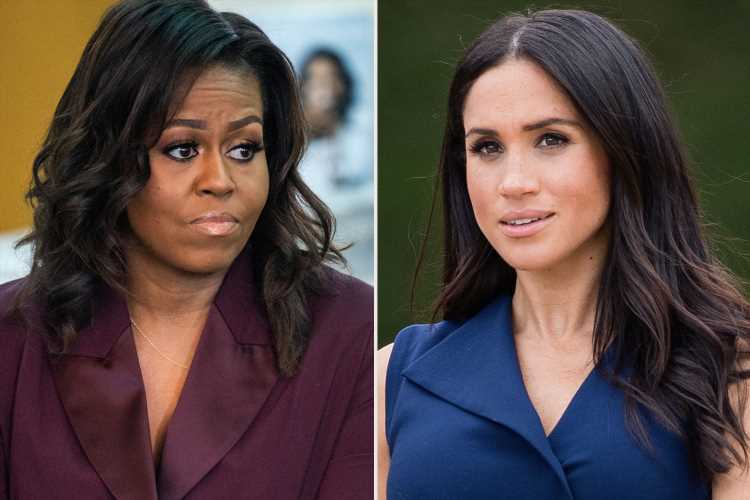 The former first lady was asked for her thoughts on the Duke and Duchess of Sussex's headline-making interview last week during her own recent sit-down with Access Hollywood.

"My hope is that, when I think about what they're going through, I think about the importance of family and I just pray that there is forgiveness and there is clarity and love and resolve at some point in time," Mrs. Obama, 57, said. "Because there's nothing more important than family."

Markle, 39, and Harry, 36, opened up about their time as senior royals during their interview last week with Winfrey, 67.

Among the revelations, Duchess of Sussex said there were "concerns and conversations about how dark [her son Archie's] skin might be when he's born."

Elsewhere, Meghan said that Kate Middleton made her cry ahead of her 2018 wedding to Harry—contrary to previous reports that the opposite took place. The former Suits actress shared that she and Harry had already gotten married three days before the royal wedding, in a private ceremony. "The whole family is saddened to learn the full extent of how challenging the last few years have been for Harry and Meghan," Buckingham Palace said in a statement, released on behalf of Queen Elizabeth.

"The issues raised, particularly that of race, are concerning," the statement continued. "While some recollections may vary, they are taken very seriously and will be addressed by the family privately."

The Queen's statement added that "Harry, Meghan and Archie will always be much loved family members."

Days later, Prince William told a reporter: "We are very much not a racist family," in response to his brother and sister-in-law's revelations.

"Obviously many of us caught the interview, as many Americans did and many people around the world," Press Secretary Jen Psaki said last week from behind the White House podium, adding, "For anyone to come forward and speak about their own struggles with mental health and tell their own personal story, that takes courage."