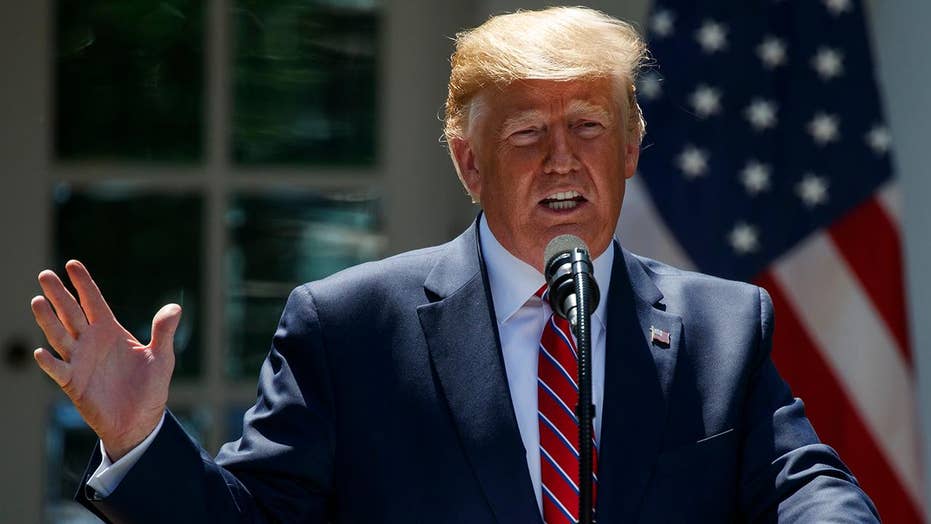 Trump: Mexico is doing more for the US on illegal immigration than Democrats are

Texas Democrat Rep. Henry Cuellar says the US should not use tariffs to threaten Mexico.

President Trump's detractors are trying to play down the significance of the U.S.-Mexico immigration deal, saying it is largely comprised of actions that Mexico had already agreed to many months ago.

Nice try. If Mexico had truly agreed to implement many of these measures in December, then why had they not been implemented six months later? As even Mexican officials acknowledge, it was Trump's threat of tariffs that forced Mexico's hand. In announcing the deal, a relieved Mexican Foreign Minister Marcelo Ebrard said the "most important thing is that they didn't apply tariffs and we didn't experience an economic slowdown."

The fact is, Trump bucked Republicans on Capitol Hill and even many of his own advisers, and used the threat of tariffs to get Mexico to act — and it worked.

The measures Mexico has promised to avoid those tariffs include the deployment of 6,000 national guard forces at Mexico's largely unguarded border with Guatemala, which — according to Mexican negotiating documents — will be "the first time in recent history that Mexico has decided to take operational control of its southern border as a priority."

Mexico also agreed to carry out thousands more arrests of illegal migrants each week and to remove the caps it imposed on the number of U.S. asylum seekers it would accept and hold inside Mexico. Until now, Mexico had been accepting a maximum of 300 people a day from the United States. Trump rightly said that was not good enough at a time when more than 4,600 migrants were apprehended crossing the border each day in May.

Now there will be no limit, which means the United States can send back to Mexico most of the Central American families who cross the border to seek asylum. That will relieve the stress on our border agents, who have been overwhelmed by the unprecedented flow of families and unaccompanied minors — the vast majority of whom do not qualify for asylum.

Ultimately, the Trump administration wants Central American migrants to have to seek asylum in Mexico rather than the United States. The United States and Canada have a "safe third country" agreement under which those seeking asylum must make their claim in the country where they first arrive.

As Roger Noriega, a former U.S. ambassador to the Organization of American States, pointed out during an interview for the American Enterprise Institute's new podcast (which I co-host), this would also put the human smugglers out of business. If Mexico is designated a "safe third country," Noriega says, "people will no longer be paying coyotes their life savings to get to the United States, because they are not going to pay that to get to Mexico."

Mexican officials convinced Trump to delay his demand for a "safe third country" agreement and give them 45 days to show that the other measures in the agreement will work. If they don't, Foreign Minister Ebrard understands that Mexico will either have to accept new asylum measures or face tariffs. "If we're successful, the number of people waiting for asylum in Mexico will decrease," he said. "If we fail, and if we don't get the results, well, we're not going to have solid arguments to propose a different path."

The president deserves credit for forcing a reluctant Mexican government to act. He was able to do so because the administration in Mexico City knew he was willing to pull the tariff trigger. It knew that Republicans on Capitol Hill would not overturn his action. And it knew that its country was vulnerable — because while tariffs would certainly have hurt the U.S. economy, they would devastate Mexico's, which contracted in the first quarter of 2019.

Everyone advised him not to do it, but Trump saw his leverage and he used it. If his critics in Congress had done their job by providing him with the emergency border funds he requested in May, and by fixing our asylum laws, he would not have been forced to do so.

Mexico now has 90 days to show progress — and so does Congress. If members do not like the blunt instrument of tariffs, then they should give the president some alternatives. Otherwise, they will be unable to avoid blame if a trade war with Mexico ensues.

Lates News:
2019-06-14
Previous Post: 3 reasons to retire as early as you can
Next Post: An insurance plan that will benefit both employers and employees