Joe diGenova: Mueller wants Americans to believe Trump is a criminal and it's up to Congress to impeach him 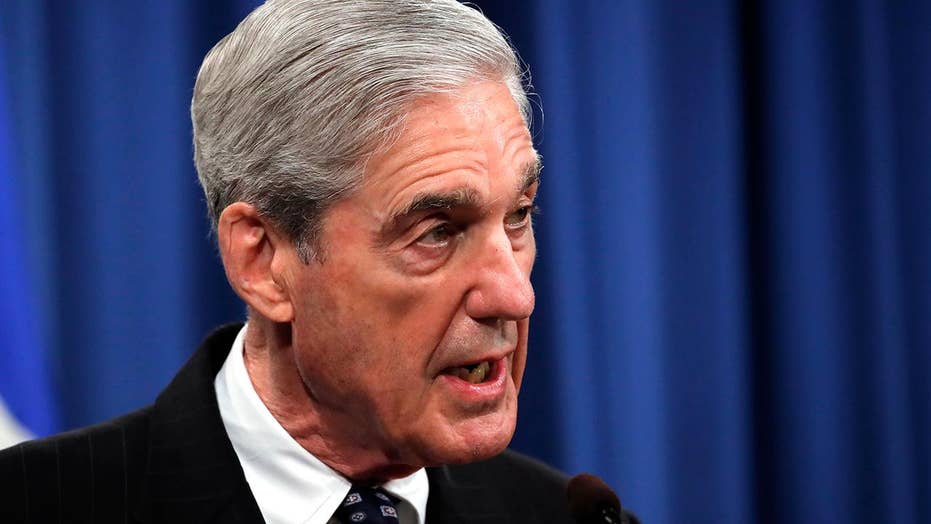 While he made it clear that his investigation is closed, the main takeaway from outgoing Special Counsel Robert Mueller’s surprise farewell statement to the media Wednesday is that he desperately wanted to take down President Trump, but simply couldn’t find a way to do it.

In a parting shot to cap off two years of outrages, Mueller tried to convince the American people that their duly elected president is a criminal who couldn’t be charged due to a technicality, and therefore it’s up to Congress to impeach him.

If not for a flimsy piece of paper that the Justice Department’s Office of Legal Counsel (OLC) compiled long ago, Mueller suggested, the president of the United States would be in the dock for “obstructing” an investigation into a conspiracy theory about his campaign and the Russian government.

This is so ridiculous that Mueller didn’t even dare to say it plainly. Instead, he fell back on the convoluted language in his report, hoping to obfuscate an issue that Attorney General William Barr had previously clarified by determining that the special counsel’s investigation did not produce sufficient evidence to justify charging President Trump with obstructing justice.

“If we had had confidence that the president clearly did not commit a crime, we would have said so,” Mueller told reporters, explaining that, as part of the Justice Department, his office was “bound by” the OLC’s opinion.

“Charging the president with a crime was, therefore, not an option we could consider,” Mueller said.

If President Trump actually committed a crime, there is nothing in the OLC’s opinion that would have prevented the special counsel or the attorney general from saying so.

The most relevant concern the OLC raises is that an indictment “exposes the President to an official pronouncement that there is probable cause to believe he committed a criminal act,” which could impair “his credibility in carrying out his constitutional responsibilities.”

The motive is obvious. Mueller, having failed for two years to find Trump-Russia “collusion,” is trying to reframe the Russiagate narrative in an effort to put some wind back in the sails of the impeachment effort.

A special counsel’s private report to the attorney general ran no such risk, especially since Barr was under no legal obligation to make Mueller’s report public. Special counsels don’t issue indictments – grand juries do.

That’s why the last man with responsibilities similar to Mueller’s – Independent Counsel Ken Starr – had no qualms writing definitively about findings of criminal wrongdoing by the subject of his investigation, President Bill Clinton.

The idea that the OLC somehow stopped Mueller from doing the same thing is absurd.

If Mueller thought there was probable cause to charge President Trump with obstruction of justice – or any other crime – he could have said so in his report without any repercussions.

Because Mueller’s report was a private, internal Justice Department document intended for the attorney general, Mueller could draw any conclusion he wanted regarding President Trump without violating Justice Department policy against disclosing derogatory uncharged conduct.

If, on the other hand, Mueller believed that the evidence was not sufficient to establish a chargeable case of obstruction of justice, he could have said so just as easily. He did, in fact, do exactly that with dozens of other potential crimes over the course of his report, including the one that served as the basis for his entire investigation.

Most crucially, Mueller’s own report admitted that the Special Counsel’s Office  “did not establish that members of the Trump campaign conspired or coordinated with the Russian government in its election interference activities.”

Attorney General Barr and Deputy Attorney General Rod Rosenstein had the courage and integrity to do what Mueller would not. Reviewing the same underlying material that Mueller developed, and in consultation with other senior Justice Department attorneys, Barr and Rosenstein jointly concluded that the evidence was “not sufficient” to constitute obstruction of justice by President Trump. Period.

More importantly, Barr went out of his way to dispel any notion that his determination had anything to do with the OLC’s opinion.

“Our determination was made without regard to, and is not based on, the constitutional considerations that surround the indictment and criminal prosecution of a sitting president,” Barr said.

The entire idea that President Trump’s vindication rested solely on the OLC opinion should have died the day Barr released his preliminary summary of the Mueller report’s conclusions.

Unfortunately, Mueller has created new shades of gray for the Democrats to exploit and chose this politically opportune moment to do so, as the Russiagaters flail on Capitol Hill.

The motive is obvious. Mueller, having failed for two years to find Trump-Russia “collusion,” is trying to reframe the Russiagate narrative in an effort to put some wind back in the sails of the impeachment effort.

Mueller couldn’t even stop himself from dropping a not-so-subtle hint to that effect when he spoke to reporters and the TV audience, characterizing the OLC’s opinion as saying that “the Constitution requires a process other than the criminal justice system to formally accuse a sitting president of wrongdoing.”

Undoubtedly, those making a show out of trying to impeach President Trump over the next year will hang on these words and adopt Mueller’s narrative – even though it’s a far cry from the “collusion” hoax that spawned this whole sorry saga.

If that wasn’t Mueller’s intention all along, it certainly has been ever since he must have realized that his whole investigation was nothing more than a witch hunt.

The case was made and is now closed, but that didn’t stop Mueller from taking one last shot at President Trump that will ultimately change nothing about the conclusions Mueller made in his own report.