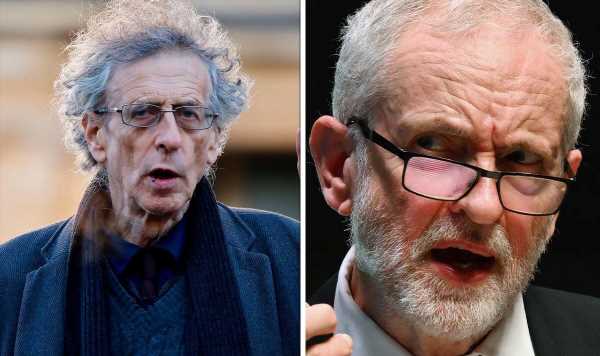 Piers Corbyn is escorted out of hospital by police

Jeremy Corbyn, 72, will address efforts to tackle climate change as he gives a keynote speech this afternoon. The longstanding MP for Islington North will appear at the Climate Summit in the centre of Bristol. Hosted by the Bristol Climate Justice Coalition, the event also features the South African scholar and activist, Trevor Ngwane. The summit includes workshops on climate strategy, the Global South, climate justice, and energy, war and climate.

Mr Corbyn will take part in the concluding session of the summit called, ‘Fighting for our Future’.

While the former Labour leader has spoken of the urgent need to address the climate crisis, his brother does not share his views.

Piers Corbyn is a notorious conspiracy theorist, anti-vaxxer and climate change denier, who has a business called WeatherAction to try and predict the weather using solar activity.

In September last year, he disrupted his brother as he took part in a panel discussion on climate change.

JUST IN: ‘Why are they still employed?’ Britons erupt in fury as civil servants hamper Brexit trade

He called for the “public ownership of energy, of water and all the other transport industries, with public investment”.

This, he said, was necessary to “end the domination of private greed that has done so much damage to our country, our environment and our planet”.

However, as he outlined his arguments he was interrupted when an agitated Piers began protesting.

The MP’s brother jumped from his seat wearing a “Resist! Defy! Don’t comply!” anti-lockdown T-shirt, according to The Guardian.

Another protester was also angry after the host of the debate asked for questions only from women and people of colour.

After the person was hauled out of the tent, Piers began shouting and was booed by the crowd.

Security tried to eject Piers, who refused several requests to leave the venue and was ignored by his brother.

Piers told the PA news agency: “I attempted to ask a question.

“They tried to remove me and they gave up.”

He was asked if he gets on well with his brother, to which he replied: “Well… most of the time.”

After the event, the conspiracy theorist handed out leaflets claiming that man-made climate change does not exist.

Other material he distributed called on the Government to “stop jabbing children”.

This week, Piers was fined £250 for saying that NHS workers at a London hospital were “murdering people”.

He accosted staff at a jabs clinic at Guy’s Hospital in January with a “cease and desist letter” to try and stop them vaccinating people.

Lates News:
2022-05-07
Previous Post: Fugitive 'killer' Casey White held me and my friends at gunpoint – my dog saved my life but I fear he'll hunt me down
Next Post: This Is The Most Powerful Nuclear Explosion In History