‘It was because of good sense!’ Sturgeon left red-faced after confronted on Covid rules 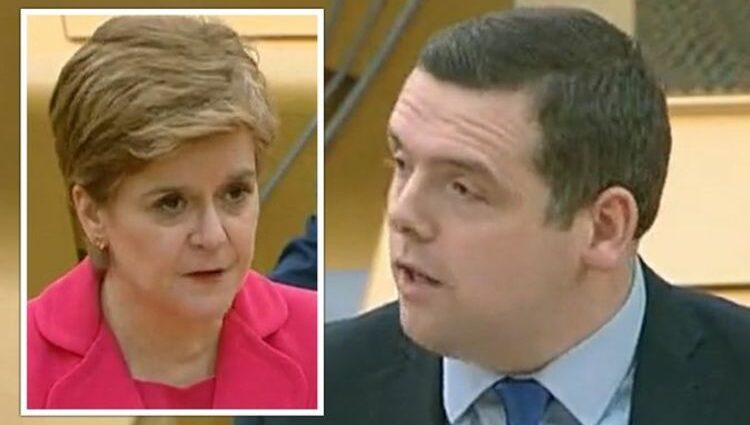 Coronavirus restrictions brought in to curb the spread of Omicron are to be eased, Nicola Sturgeon has confirmed, as she said there were signs Scotland is “starting to turn a corner”. Rules have been in place since Boxing Day which limit the number of people who can attend outdoor events to a maximum of 500, but the First Minister announced this will be lifted from Monday January 17 – a move which will allow sports fans to return to football grounds and attend Six Nations rugby matches in Edinburgh. However, Ms Sturgeon also revealed the Scottish Government is again considering extending its vaccine passport scheme – with Scottish Conservative leader Douglas Ross branding this “disappointing” while Liberal Democrat Alex Cole-Hamilton said he was “concerned” by the prospect.

Ms Sturgeon stated: “As we do lift these other protective measures it will be necessary to consider again if extending the scope of Covid certification to other venues might be a necessary protection.”

She stressed no decision had been made, saying the issue would require “careful judgment” with ministers to give the matter “appropriate consideration”.

And while the attendance limit for outdoor events is being lifted, venues are being asked to carry out vaccine checks on larger numbers.

The certification scheme currently requires venues to check if 20% of the crowd at an event are vaccinated.

But, from Monday, the organisers of events with 1000 people or more will have to check the status of at least 50% of those attending, or a minimum of 1,000 people, with Ms Sturgeon saying they should check “whichever figure is higher”.

Changes will also be made to the scheme which will also mean someone is only classed as being “fully vaccinated” if they have had a booster jag – assuming their second dose was more than four months ago.

Ms Sturgeon outlined the measures as she told MSPs that, while the Covid situation “remains very challenging”, there were “some early indications in the data that offer some encouragement”.

While the Scottish Government had feared the faster spreading Omicron variant could have resulted in 50,000 Covid cases a day by early January, Ms Sturgeon said this had “so far not materialised”.

The latest daily figures confirmed a further 10,392 cases – with 27.7% of all tests being returned as positive.

Over the past week, just over 12,700 people a day have had positive PCR tests – with Ms Sturgeon noting this was down by 17% from the previous week.

The First Minister said: “This is encouraging and gives us some hope that cases may be at or close to the peak.”

She added: “The situation in Scotland just now is undoubtedly serious but perhaps less so than it might have been, and there are also some signs that we may be starting to turn a corner.”

Spanish PM orders EU to copy UK as furious Europeans fume at rules [INSIGHT]
Diabetes: Children at greater risk of diabetes after Covid [ANALYSIS]
Fourth booster jab: When is it coming, is it already being rolled out? [VIDEO]

Mr Ross, however, said: “The outlook is much better now not because of Government restrictions but because of people’s good sense.”

The Scottish Tory leader told the First Minister: “People across Scotland got their booster, took tests, self isolated when they needed to.

“They were cautious to protect their families, and especially careful about the vulnerable. That’s why the data is more positive.

“The people of Scotland got this right, not the Government.”

Arguing that the public had “already learned to live with Covid”, he told Ms Sturgeon that ministers have to “trust their judgment far more as we move forward”.

Ms Sturgeon said the progress that had been made was “down to a combination” of vaccination, the booster delivery, the response from the public and “some of the sensible steps that have been taken”.