It just got harder to make the later 2020 Democratic debates

It’s going to be more difficult for Democratic presidential candidates to the make the stage of the third and fourth debates, according to new qualifying rules released by the Democratic National Committee Wednesday.

For debates scheduled for September and October, candidates will have to hit 2% in four qualifying polls and tally at least 130,000 individual donors, according to the DNC guidance. For the first and second rounds of debates, the DNC is requiring candidates to either hit at least 1% in three polls or receive campaign contributions from at least 65,000 donors. 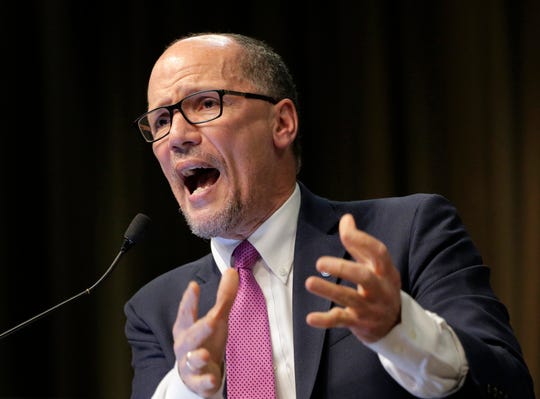 In this April 3, 2019, photo, Tom Perez, chairman of the Democratic National Committee, speaks during the National Action Network Convention in New York. The Democratic National Committee is upping the ante for its second round of presidential primary debates, doubling the polling and grassroots fundraising requirements from its initial summer debates. The parameters, announced Wednesday, May 29, 2019, are likely to help cull a crop of nearly two dozen candidates and, in the process, intensify scrutiny on Democratic Chairman Perez and his pledge to give all candidates a chance to be heard. (Photo: Seth Wenig, AP)

Can Biden’s lead hold? 2020 frontrunner in May? It’s probably not a good thing

Where things stand: What you need to know about the 2020 election so far

For the September debate, each poll must be publicly released between June 28, 2019, and August 28, 2019. The DNC said it will announce deadlines for qualifying polls ahead of the October debate will be released in the future.

The DNC also announced Wednesday that the third debate will be hosted on Sept. 12 by ABC News, in partnership with Univision. A second night of debating will be held to accommodate a large field if necessary, according to the DNC.

The first debate is scheduled to be held over two nights on June 26 and 27 in Miami, and the second round is scheduled for July 30 and 31 in Detroit.

The DNC is capping participation at 20 candidates for the first two round of debates and says it will announce who will make it to the stage about two weeks before each scheduled debate.