Supreme Court nominees don’t like to answer questions about how they feel about one issue or another. They want to at least appear impartial and convey that they will decide cases based entirely on the law. But Amy Coney Barrett’s stunning refusal in her Senate confirmation hearing to answer basic questions ― ones that have obvious, fact-based answers ― is also on display in her written responses to senators’ follow-up questions.

Late Tuesday, the Senate Judiciary Committee released all 184 pages of Barrett’s responses to follow-up questions from senators on the panel. Again and again, President Donald Trump’s Supreme Court pick dodged the same basic questions that don’t require a biased opinion to answer, just an acceptance of science and data.

Barrett, who is currently a U.S. appeals court judge, raised eyebrows in her hearing when she refused to say whether climate change is real. Pressed on it by Sen. Sheldon Whitehouse (D-R.I.) in his follow-up questions, Barrett said the Supreme Court has said climate change is “controversial” so she can’t discuss it.

The science behind climate change is not controversial. As spelled out on NASA’s climate website for children, climate change is very real, and the primary cause of it is greenhouse gas emissions from cars, power plants and other human-made sources. A group of 1,300 scientific experts has concluded that a more than 95% probability exists that human activities over the past 50 years have contributed to the planet’s warming.

Barrett also refused to say in her follow-up answers whether voter fraud is a widespread problem in U.S. elections (it is not) and whether restrictive voter ID laws suppress the vote in poor and minority communities (they do). Both questions are easy to answer and backed by substantial evidence. But Barrett said she wouldn’t answer them because it’s possible those issues could be the subject of litigation that comes before her as a judge ― a standard that could apply to almost anything. (Is the sky blue? Litigable!) 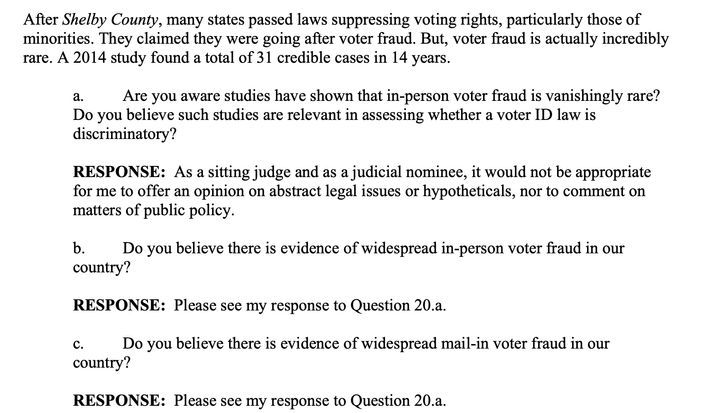 So in her follow-up questions, Hirono asked Barrett to define a “policy question” versus a “question of fact.”

She refused to answer that, too.

Trump’s Supreme Court pick wouldn’t even answer follow-up questions about whether things that are illegal are illegal.

“According to federal law, is it legal to vote twice in a single federal election?” asked Sen. Dianne Feinstein (D-Calif.).

“As a sitting judge and as a judicial nominee, it would not be appropriate for me to offer an opinion on abstract legal issues or hypotheticals. Nor would it be appropriate for me to opine on the statements of any political figure or on any subject of political controversy,” Barrett wrote, indirectly referencing Trump and his suggestions that Americans should vote twice.

Voting twice in a federal election is illegal under federal law, considered fraud, and a felony in many states. Penalties include being fined $10,000 and going to jail for five years.

“As a candidate in 2016, President Trump said that U.S. District Judge Gonzalo Curiel, who was born in Indiana to parents who had immigrated from Mexico, had an ‘absolute conflict’ in presiding over civil fraud lawsuits against Trump University because he was ‘of Mexican heritage.’ Do you agree with President Trump’s view that a judge’s race or ethnicity can be a basis for recusal or disqualification?”

When Booker posed this question to U.S. Circuit Judge Lawrence VanDyke in his follow-up questions to him, VanDyke said, “I do not believe a judge’s race or ethnicity is a basis for recusal.”

Kathryn David, Trump’s former nominee to the U.S. Court of Federal Claims, responded to the question by saying, “If confirmed, I will determine on a case-by-case basis whether I must or should be recused from a matter consistent with the Code of Conduct for United States Judges, 28 U.S.C. 455, and all other laws, rules and court practices governing the situation. Under that statute, a judge’s race or ethnicity is not listed as a basis for recusal.”

And here’s U.S. District Judge John Gallagher in response to Booker’s question: “I cannot foresee any circumstances under which recusal of a judge from a case would be based on race or ethnicity.”

Contrast those responses with Barrett’s: “It would be inappropriate for me, as a sitting judge and as a judicial nominee, to opine on the statements of any political figure or on any subject of political controversy,” she wrote.

Of course, during her hearing, Barrett avoided plenty of other questions from Democrats on the issues they’re most concerned about if she is confirmed. She refused to distance herself from her past criticism of Supreme Court Justice John Roberts for upholding the Affordable Care Act. She wouldn’t say if NFIB v. Sebelius or King v. Burwell ― two cases that are central to the Affordable Care Act’s constitutionality ― are settled law. She wouldn’t say if Roe v. Wade was correctly decided, and she wouldn’t distance herself from previous criticisms of Obergefell v. Hodges, the landmark marriage equality case.

Barrett is all but certain to be confirmed. The Judiciary Committee is voting Thursday to send her nomination to the Senate floor for her confirmation vote, which is scheduled for Oct. 26.

Will Rudy Giuliani be disbarred? Probably not for Trump's election lawsuits, experts say.