The Commission President appointed Mairead McGuinness, a former television presenter, as the next Irish commissioner. Dublin was dealt a harsh blow by Mrs von der Leyen, who handed the role of the EU’s chief trade negotiator to another eurocrat. Ireland has been without a commissioner since Phil Hogan resigned from the post late last month.

Mr Hogan quit the £240,000-a-year role after becoming embroiled in a scandal over his failure to follow coronavirus health measures during a summer break to his home country.

In a snub to Dublin, Commission vice-president Valdis Dombrovskis was handed his the influential job as the bloc’s trade chief. 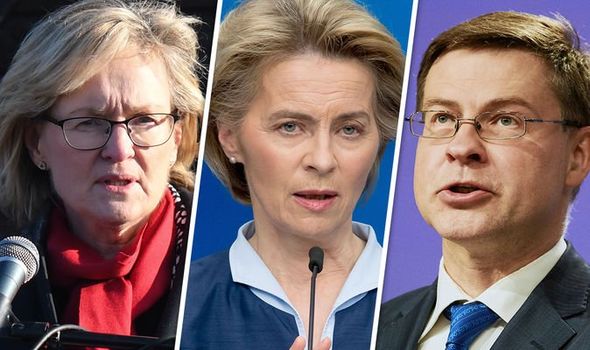 Mrs von der Leyen’s reshuffle comes as a significant blow to Dublin at a time when the country is charting its post-Brexit future.

The EU’s trade commissioner, while not at the frontline of the future relationship negotiations, is a key component in the discussions.

Ireland will lose influence during the wrangling as a result of the demotion.

Ms McGuinness pipped Andrew McDowell, an outgoing vice-president of the European Investment Bank, to the role after they were both nominated by the Irish government on Friday.

“Mrs McGuinness has significant political experience on EU issues having been an MEP since 2004, and currently holding the post of first vice-president of the European Parliament,” the Commission President said.

“This experience is crucial in carrying forward the EU’s financial sector policy agenda and ensuring it supports and strengthens the commission’s key priority, notably the twin green and digital transition.”