Impeachment Calls and a Booker-Biden Fight: This Week in the 2020 Race

Every Saturday morning, we’re publishing “This Week in the 2020 Race”: a quick way to catch up on the presidential campaign and the field of 24 candidates for the Democratic nomination.

One way to respond to Mueller? Print T-shirts

In testimony before two House committees on Wednesday, Robert S. Mueller III, the former special counsel, reiterated his findings on Russian interference in the 2016 election and President Trump’s efforts to stop his investigation. Despite sharp questions, he confirmed nothing beyond what was in his report, but he did say unequivocally that Mr. Trump was wrong to claim exoneration.

The Democratic presidential candidates, more than half of whom support either impeachment or an impeachment inquiry, largely described the hearing as confirmation of “what we already knew,” as Senator Amy Klobuchar of Minnesota put it in an email to supporters. If anything, Mr. Mueller’s dry testimony made impeachment before the next election even less likely.

But Senator Elizabeth Warren of Massachusetts reiterated her belief that the report amounted to an impeachment referral.

“Some things are above politics, and one of them is our constitutional responsibilities to do what is right,” Ms. Warren said. “And the responsibility of the Congress of the United States of America, when a president breaks the law, is to bring impeachment charges against that president.”

Senator Kirsten Gillibrand of New York, Representatives Seth Moulton of Massachusetts and Tim Ryan of Ohio, and the former housing secretary Julián Castro also called for impeachment proceedings. Ms. Klobuchar promoted the Election Security Act, a bipartisan bill she introduced that would require states to use backup paper ballots and conduct postelection audits, among other measures. Gov. Steve Bullock of Montana … well, he added a “limited edition” T-shirt to his campaign store to remind voters that six Trump associates had been indicted 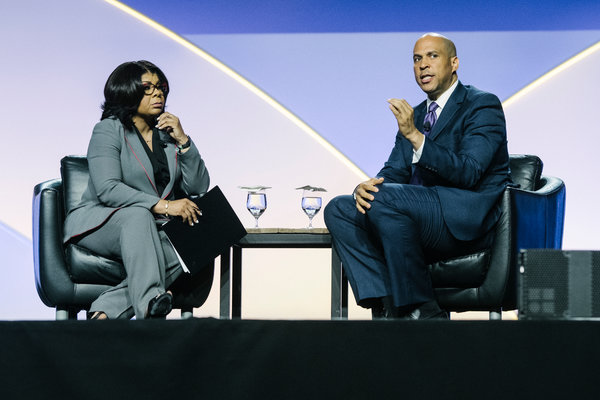 Many of the 2020 Democrats took turns this week speaking to mostly black audiences about their plans to support black communities — first at an N.A.A.C.P. forum and later at the National Urban League’s annual conference.

Senator Bernie Sanders of Vermont promised to stand up to developers seeking to “come in and build expensive condominiums” that displace residents.

Senator Cory Booker of New Jersey said his identity as a black man living in Newark gave him a unique perspective that no president has had before.

And Senator Kamala Harris of California noted that she had sponsored a marijuana decriminalization bill aimed at eliminating racial disparities in sentencing.

Mayor Pete Buttigieg of South Bend, Ind., who is seeking to shed his reputation as a candidate supported mainly by white elites, pointed to his recently released “Douglass Plan” to address racial inequality as evidence of his campaign’s growth.

Booker and Biden sparred on race and crime

“Joe Biden had more than 40 years to get this right,” Mr. Booker said. “The proud architect of a failed system is not the right person to fix it.”

Mr. Biden then questioned Mr. Booker’s own record on criminal justice, specifically the Newark Police Department’s use of stop-and-frisk tactics when he was mayor.

The feud is likely to spill over to the coming debates: On Wednesday night, Mr. Booker will be standing on one side of Mr. Biden, and Ms. Harris, who confronted Mr. Biden about his record on race during the last debate, will be on the other.

Biden got some good polling news

A pair of polls released Thursday showed Mr. Biden maintaining a solid lead despite his shaky debate performance followed by a month of attacks from competitors.

Mr. Biden captured 33 percent of support in the latest Fox News national poll, well ahead of Mr. Sanders (15 percent), Ms. Warren (12 percent) and Ms. Harris (10 percent). It was a good result for Mr. Biden, especially since polls immediately after the debate had him as low as 22 percent.

Separately, a Monmouth University survey showed Mr. Biden at 39 percent in South Carolina, a key early voting state. Ms. Harris was at 12 percent, Mr. Sanders at 10 percent and Ms. Warren at 9 percent. Of the two dozen candidates, only 10 registered even one percentage point of support.

The Monmouth poll spoke in particular to the continued support for Mr. Biden among black voters, who are a majority of the primary electorate in South Carolina. Fifty-one percent of black voters there said they supported Mr. Biden, compared with 24 percent of white voters.

Two proposals released this week focused on climate change: one from Ms. Gillibrand and one from the impeachment activist and the former hedge-fund investor Tom Steyer.

Ms. Gillibrand’s plan calls for a full transition to renewable energy within 10 years, and for the entire economy to produce net-zero carbon emissions by 2050. Three central components are an excise tax on fossil fuel producers, a tax on planet-warming carbon emissions and a “green jobs recovery fund” to help fossil-fuel workers move to jobs in clean energy.

Senator Michael Bennet of Colorado released a plan that he said would “address the unique challenges” rural Americans face in obtaining quality health care. Among other things, it would establish what Mr. Bennet has called “a Medicare-X public option.”

About Mr. Biden’s criminal justice plan: It aims to reduce mass incarceration and racial disparities, largely by reversing policies that he, as a senator, helped create. Key elements include eliminating mandatory minimum sentences, ending the death penalty and providing $20 billion in grants to address root causes of crime, such as illiteracy and child abuse.

Mr. Castro released his plan to support Native American communities, which included a pledge to create a White House Council on Indigenous Community Affairs and a federal task force to help Native American women who are victims of human trafficking.

Former Representative John Delaney proposed a 10-point “Cities Fair Deal Plan.” Among other things, he wants to hire an “entrepreneurship czar” in the White House, fund minority-owned businesses and give more government contracts to companies that hire employees in economically struggling areas.

Ms. Harris introduced a bill in the Senate that would provide $250 billion to keep water supplies clean and $50 billion for testing and for repairs in communities like Flint, Mich. She also introduced a bill to decriminalize marijuana and expunge millions of convictions. And on Friday, she presented a plan to invest tens of billions of dollars in historically black colleges and universities, and to support black entrepreneurs.

Ms. Klobuchar wants to increase access to affordable homes and crack down on discriminatory housing practices. Her plan calls for more investment in housing voucher programs, as well as new grants to help people who are facing eviction afford a lawyer.

Former Representative Beto O’Rourke of Texas released an education proposal focused on racial disparities. Its centerpiece is a $500 billion fund to close race- and income-related gaps in school resources. He also announced a plan to expand Social Security that includes a “caregiving credit” for people who have to leave the workforce to care for a relative.

Maggie Astor is a political reporter based in New York. Previously, she was a general assignment reporter and a copy editor for The Times and a reporter for The Record in New Jersey. @MaggieAstor

Matt Stevens is a political reporter based in New York. He previously worked for The Los Angeles Times, covering drought, water and the city’s west side. @ByMattStevens