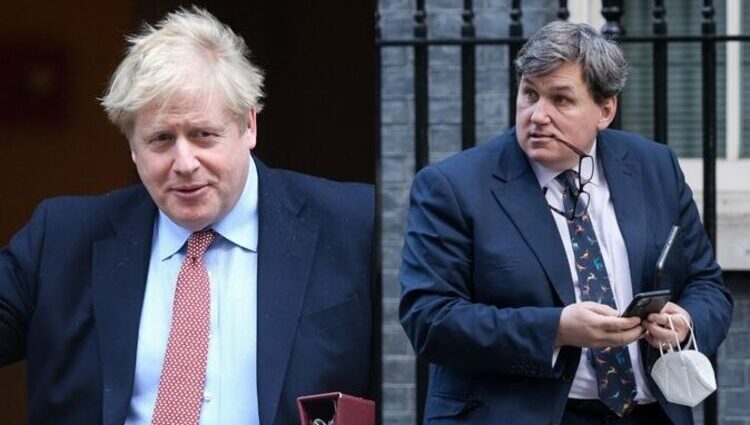 Nick Ferrari quizzed the Tory MP over the partygate scandal continues to unfold. Speaking of MP Kit Malthouse’s relationship with the Prime Minister, Mr Ferrari said “you know him well. You were his deputy mayor in London. You’ve known him for two decades – would he tell us? Its a hypothetical question, Nick”, Malthouse initially tried to swerve Ferrari’s invasive questions, “but I think if he did [receive a fine] he probably would yes.”

Presenting for LBC, Mr Ferrari explained: “Were it Nick Ferrari of Station Approach, Blackheath, who was done for having some friends round for a prosecco party – everyone would know about it.”

“Shouldn’t it be the same for all within number 10?”

Downing Street remains at the centre of the partygate scandal as allegations claim several law-breaking parties were held at the Prime Minister’s home during the covid lockdown.

The Conservative MP seemed to disagree with Ferrari as he snapped “well that’s not right, Nick,”

“The routine approach of the police is not to reveal the identity of those who get fixed penalty notices.”

While this is current police protocol, there has obviously been considerable public interest in the police investigation surrounding numerous leading politicians, among them the Prime Minister himself.

Malthouse argued the fine should be able to remain a private matter for Boris Johnson: “I don’t see why that should be changed for people who work at Downing Street.”

Malthouse, who currently serves as the Minister of State within the Ministry of Justice, appeared to play down the severity of a possible partygate fine.

“Don’t forget, a fixed penalty notice is actually just a reasonable belief by the police that the law has been broken.”

The minister suggests a fixed penalty notice against the Prime Minister would not necessarily serve as proof of any actual wrongdoing.

Malthouse highlighted that, should the Prime Minister receive a fixed penalty notice, he would “still have the right to challenge it.”

Despite his acknowledgement that those issued with fines normally remain confidential, Malthouse confided “from a personal point of view, as a politician, I think I’m in a different situation.”

Acknowledging his position of power, Malthouse revealed, “if I got a fixed penalty notice, I would tell you.”

Malthouse remains a defendant of the fact that “a fixed penalty notice is a reasonable belief by the police that an offence has been committed” and not necessarily well-founded proof of guilt.

As the partygate scandal continues to unfold, Malthouse concluded with “lets see where this lands us”, as many details about the speculated parties remain concealed in the ongoing police investigation.

Malthouse, serving as MP for North West Hampshire, remains a diligent supporter of PM Boris Johnson during this chaotic period for UK politics.