‘Have a word with your leader!’ Johnson shuts down Labour MP in heated strike clash

PMQs: Boris tells Labour MP 'have a word with your leader!'

In a massive slap down to Labour MP Kate Osborne for criticising the Government’s handling of strikes and the cost of living crisis, Boris Johnson lashed out: “If she wants to support the working people of this people, Mr Speaker, can I suggest she gets off the picket line and has a word with her leader, Mr Speaker.”

Under acclamation from his party, Mr Johnson continued: “We support the public of this country who will see a reduction in their cost of transport, which this government is delivering.”

The criticism levelled at the Prime Minister comes as other industries could soon join railway strikers in taking the streets over the cost-of-living crisis and poor working conditions. 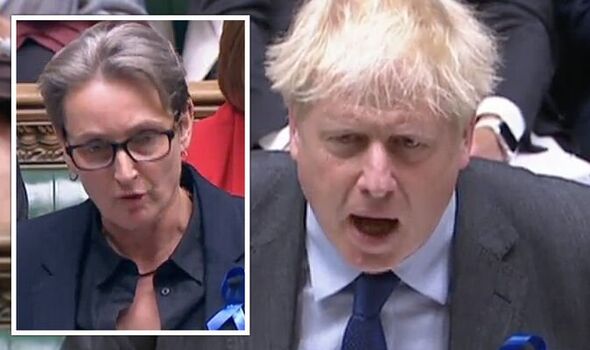 “Mr Speaker, tens of thousands of people were marching through London last weekend protesting against his out-of-touch government. Rail workers are on strike, railway workers, NHS workers, teachers and even barristers are on the verge of taking industrial action. All workers are struggling to cope with the worst cost-of-living crisis in history.

“Ministers are planning to boos city buses pay whilst demanding pay restraint for everyone else. So, can the Prime Minister tell me: when is he going to stop meaningless soundbites and instead, start supporting working people around the country?”

The RMT union are holding fresh talks with rail bosses in a bid to break the railway paralysis that gripped the country on Tuesday and could grip it again on Thursday and Saturday. The RMT boss Mick Lynch congratulated his rail workers for the “fantastic” turnout at picket lines that “exceeded expectations.”

Other professions like teachers, NHS workers and barristers could soon follow suit and join rail workers in staging protests across the UK if they are not given a pay rise above inflation.

Lates News:
2022-06-22
Previous Post: The stakes are too high to let Evergrande fail. Here's why
Next Post: Crypto brokerage FalconX raises $150M at $8B valuation