A Republican congressman from South Carolina wasn’t standing for it on Capitol Hill on Thursday when Homeland Security Secretary Alejandro Mayorkas tried to defend Vice President Kamala Harris regarding her absence from the U.S.-Mexico border region.

Mayorkas insisted that Harris has faced “quite unfair” criticism for not visiting the border region in nearly three months as President Biden’s point person on the migrant crisis.

“But she’s laughing at it!” U.S. Rep. Ralph Norman, a member of the House Homeland Security Committee, fired back, according to Mediaite.com, apparently referring to March remarks in which Harris appeared to brush off criticism against her.

“It’s an insult to say that you’re looking at the border wall. … What do you have to look at? You’re not building it,” Norman continued. 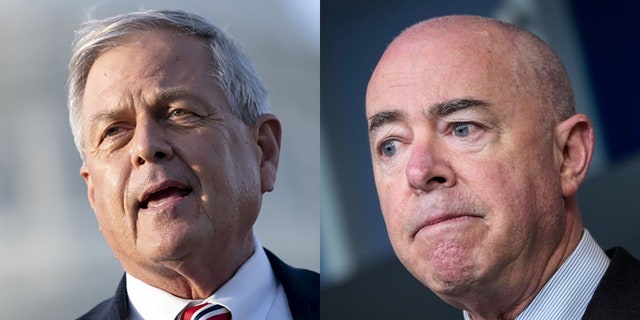 “You’re comments are just words, and they’re very unfair,” Norman said. “I asked you a simple question, and I would like for you to just answer simply. Does it make sense for the leaders of the free world to go in to talk and see what’s going on at the border?”

Mayorkas – who along with Health and Human Services Secretary Xavier Becerra have visited the border region while both Harris and President Biden have stayed away — responded that Harris was “quite familiar with the situation at the border,” having served in the past as attorney general of California, Mediaite.com reported.

His answer appeared to echo Harris’ own recent response to NBC News anchor Lester Holt, when he asked the vice president why she hadn’t visited the border region since taking office.

“We’ve been to the border,” Harris claimed, seeming to refer either to her time before the vice presidency, or to border visits by other Biden administration officials. “I – and I haven’t been to Europe. And I mean, I don’t – I don’t understand the point that you’re making.”

Lates News:
2021-06-18
Previous Post: COVID-19: This Is the State Fighting It Most Successfully
Next Post: Inflation breakout will drive 10-year Treasury yields above 2% in coming months, Wells Fargo predicts