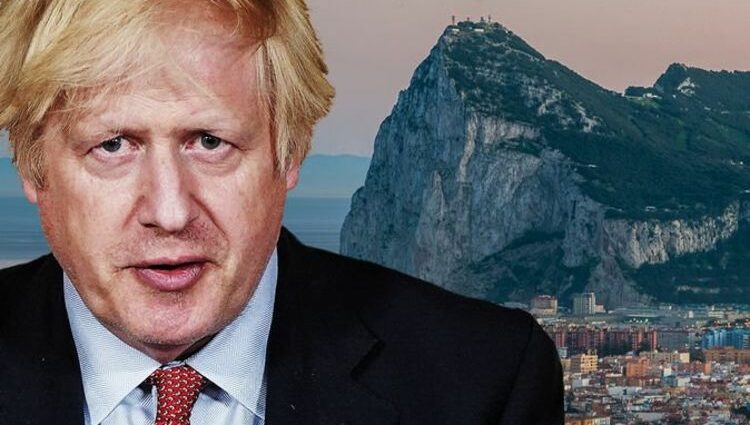 He said: “And the English without lorry drivers… No way to deliver petrol…

“These Brexit people, what a mess they’ve got themselves into.

“It’s easy to sack the workers, yes, but then who does the work?

“That’s when you realise that workers are indispensable in society.”

His attack did not stop there as the TV chef went on to explicitly mock Mr Johnson’s hairstyle.

He continued: “That Englishman, that president they have, the one with the blonde hair… That hairdresser, he has a good hairdresser.

“The English are quite a thing. I don’t mean all of them, but… With Brexit, I got the feeling that they think they’re a superior race.

“They aren’t. There is no superior race. Nobody in the world.

“Some people are taller, blonder, stronger, poorer, richer… But there’s no superior race.

“If someone didn’t know that, I’m telling you now.

“Some people think they are superior, but I say that Gibraltar is Spanish.”

Mr Arguiñano’s come after a Spanish writer said Gibraltar should be returned to Spain as he promoted his latest romance novel, The Italian.

The new book by Arturo Pérez-Reverte is set in the area of Campo de Gibraltar where Italian divers were trying to boycott British submarines during World War 2.

The writer began by referring to the Rock, saying that “Gibraltar should be Spanish, but the fact that it had been English, has fed many people and that should not be forgotten.”

Gibraltar is a British overseas territory but is also the subject of a territorial claim by Spain.

It was a subject of contention during the EU divorce talks where the Spanish government was accused of using Brexit to snatch back the territory.

It was captured in 1704 and by 1713 the Spanish Crown formally ceded the territory to the British Crown.

It was a subject of contention during the divorce talks where the Spanish government was accused of using Brexit to snatch back the territory.

During the 2016 Brexit referendum, Gibraltar asserted its right to have its vote counted alongside the rest of the UK.

Gibraltarians voted to remain part of the European Union with 95.9 percent.

Back in January, Arancha González Laya, Spain’s minister of foreign affairs, European Union and Cooperation, claimed Spain will be the “ultimate responsible and guarantor” for the application of Gibraltar within the Schengen area.

He said: “I will never bring a law to Parliament that allows it.

“In fact, whatever the agreement or the treaty provides, no Frontex official will be able to operate in Gibraltar without the authorisation granted by an act of Parliament in Gibraltar.”

In 2020, reports revealed how Spain tried to lobby US Congressmen into supporting a plan to strip Britain of sole sovereignty over Gibraltar.