UKIP have launched their manifesto and said none of their members were “seriously racist” as polling day draws closer.

The party’s interim leader, Patricia Mountain, launched the manifesto in Westminster, in which UKIP calls for a “clean exit” from the EU, and denies there is a climate emergency.

Speaking at a news conference at the launch, she said: “Please give a good impression to the public that we’re not nasty racists. We are good, honest, caring people, all of us are.

“I’ve never met a racist in UKIP. Well, maybe a few people on the edge, but not seriously racist, you know, only people who have concerns about this country.”

The manifesto pledges also include:

Ms Mountain is the party’s ninth leader, including other interims, in the last three years.

The launch came after an appearance on All Out Politics with Sky News’ Adam Boulton, in which she failed to name any of the party’s target seats for the 2019 election.

She said they had put up 44 candidates in “carefully chosen” seats and hadn’t wanted to damage any Brexiteer, but couldn’t name any of them.

She said: “If we look at the Brexit Party, I don’t think it’s going to be here forever.

“UKIP has been here forever, we aren’t going anywhere but after Brexit what do they actually stand for?”

She highlighted a UKIP manifesto pledge in which they said they would not grant asylum to anyone who had come to the UK illegally from a safe country – something which is already government policy. 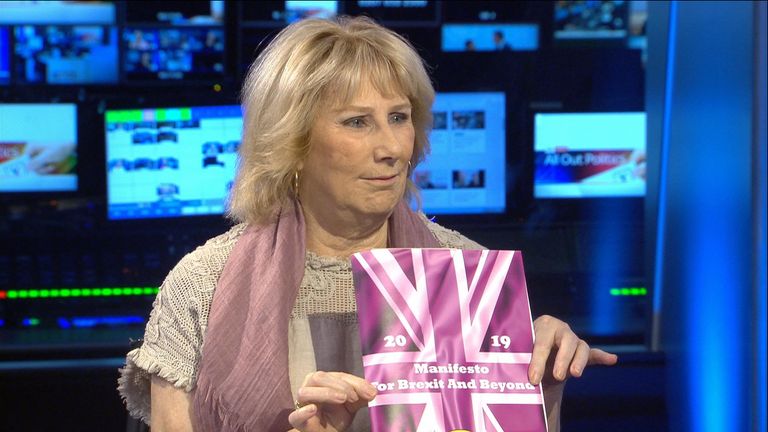 Asked if UKIP was racist, she said no and added: “If you believe in the nation and you love this country, you should join UKIP.”

“I don’t think he wants to join us, he stood against us. He was a personal adviser to Gerard Batten but he isn’t knocking at our door.”

Ms Mountain said the party members were “realists” and were not expecting to get into Number 10.

She said: “But we will send a message, be it loud, it may be quiet. But a message that there is still a party in this country that can’t be bought, that can’t be pressurised into silence.

“We are here for all those that have been let down and betrayed by our politicians in Westminster.”

UKIP’s support has declined in recent years, from a high of 2014 when it came first in the 2014 European Parliament election with 27.5% of the vote.