In a pre-general election promise, Labour have vowed to offer pay-outs of up to £31,000 to “compensate” women impacted by an accelerated rise in the state pension age.

They have criticised the “unfair way” in which the state pension age was equalised between men and women through legislation passed in both 1995 and 2011.

An estimated 3.7 million women born in the 1950s have been affected by the changes.

And WASPI campaigners claim hundreds of thousands are suffering financial hardship as they were not left enough time to re-plan for their retirement.

Labour’s promise to introduce a compensation scheme for those women affected, with an average payment of £15,000, is estimated by the party to cost £58bn.

The pledge was unveiled after the launch of the party’s manifesto last week, with the £58bn bill not included in Labour’s costing of its election promises.

It also appears to rip up the party’s fiscal rule to only borrow for investment. 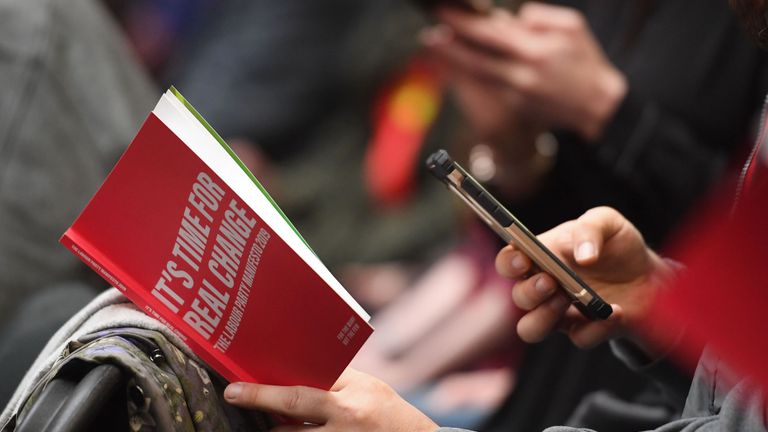 He said: “We owe a moral debt to these women, they were misled, they’ve lost a lot of money.

“The women I’ve just been talking to lost between £30,000 to £50,000 each because of this and they are dedicated people to their communities and their families and they’re very angry about the way they’ve been treated.

“This is righting a wrong that our society has done to them, it’s got to be put right.”

Who are the WASPI women?

Prime Minister Boris Johnson has expressed his sympathies to women affected by state pension changes, but said he could not promise to “magic up that money” for them.

Liberal Democrat leader Jo Swinson has said her party will wait until the results of an ongoing investigation into the issue and criticised Labour’s “uncosted pledges” as unhelpful.

Meanwhile, the Institute for Fiscal Studies (IFS) have accused Labour of showing a “decisive lack of priorities” as some of the women affected are “actually quite well off”.

Commenting on Labour’s proposal, IFS director Paul Johnson told the BBC: “Of course it immediately breaks the promises they made in their manifesto just last week only to borrow to invest.

“So, they would need even more than their £80bn tax rises if they wanted to cover that.”

He added: “There’s so much money for so many things, but they’re not finding money, for example, to reverse the welfare cuts for genuinely poor people of working wage.

“Whilst some of these WASPI women really have suffered hardship as a result of not realising that this pension age increase is happening, although it was announced back in the early 1990s, many of them are actually quite well off.”

But Mr Corbyn shrugged off criticism of Labour’s latest spending pledge, with the party calculated to be promising to spend an extra £28 for every pound of extra day-to-day spending the Tories are setting out.

He said: “The Liberal Democrats and the Conservatives are the ones that perpetrated this con against the women in 2011.

“So I think their crocodile tears should be taken with a big pinch of salt.

“What we have to do is right the wrong for the WASPI women.

“It will increase the public realm – if that’s the right way of putting it – in our society.

“We’ll still be spending less than France or Germany does on its public services even with everything we’re proposing.”

Tragedy as around 90 pilot whales die after becoming stranded