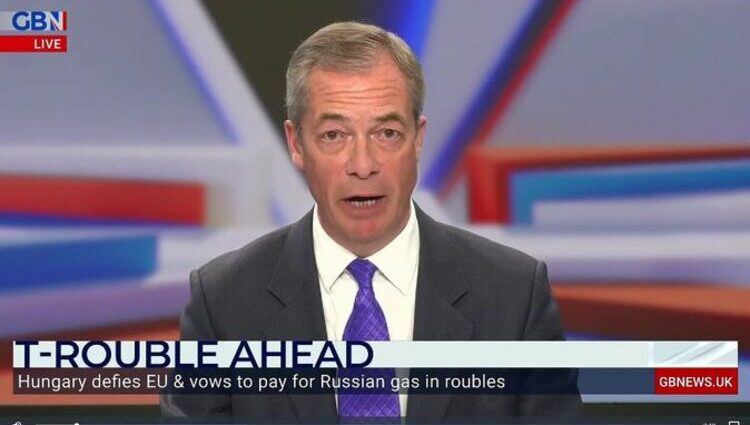 He said: “Since the invasion EU countries have paid 35 billion dollars to Russia for oil, gas and coal and wait for it a grand total of 1 billion US dollars to Ukraine in the form of aid.

“I’m asking you the question: how hypocritical is the EU?

“It’s episodes like this that say to me thank goodness we’ve left.

“Common foreign policies emerging and common energy policies. I’m sure we can do it much, much better.”

Mr Farage added that despite threats of further sanctions against Moscow the Russian ruble has risen in value.

The former MEP argued this was partly the re-election of the pro-Putin Viktor Orban in Hungry but it was necessary to “follow the money” to examine continuing energy deals between Brussels and Moscow.

He said: “Universal condemnation from western leaders of Russia.

“Much talk about war crimes trials that will be held later on but also lots of very tough talk on sanctions.

“Sanctions being imposed on individuals, so much that Roman Abramovich is having to borrow money to pay his staff because he can’t use his bank account.

“We see endless rounds of applause for the new hero President Zelensky of Ukraine.

“But sometimes I think it’s quite useful actually despite the pledges from the UK Government to end this year imports of oil and coal and the European Union themselves to stop buying coal from Russia by the end of the year.

“I think it’s useful sometimes to follow the money, to see what’s really going on.

“Today the ruble traded higher against other international currencies than it was trading before the invasion of Ukraine, which tells you really a lot.

“That’s not just because the newly re-elected leader Viktor Orban of Hungary has agreed to pay in rubles. I’ll tell you what’s really going on and this was made clear yesterday.”

Lates News:
2022-04-07
Previous Post: MicroStrategy Has A New “Buy The Dip” Competitor In Terra As LFG's Bitcoin Stash Hits $1.6 Billion
Next Post: Biden jokes about expanded fight with Russia: 'If I gotta go to war, I'm going with you guys'