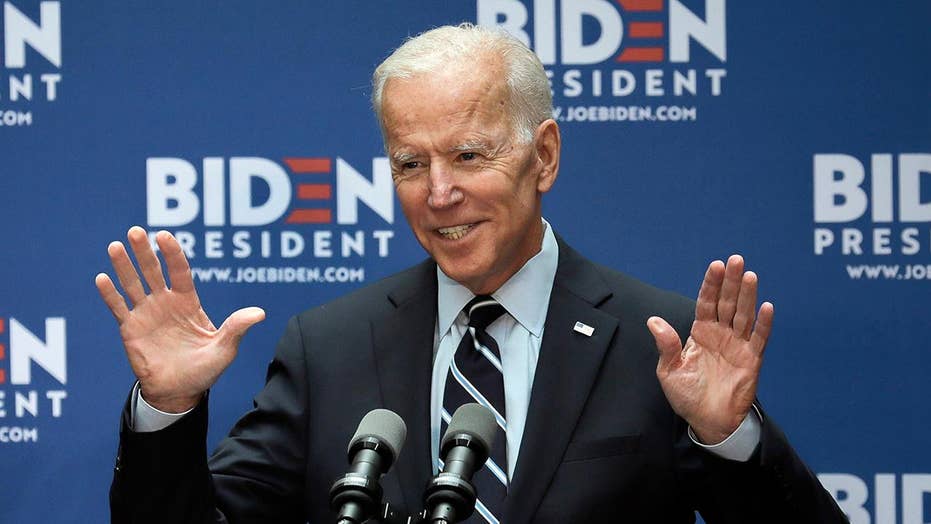 Former Vice President Joe Biden has a commanding lead in the early primary state of South Carolina as he seeks the Democratic nomination in 2020; Peter Doocy reports.

South Carolina Democratic primary voters, more than half of whom are expected to be African American, say former Vice President Joe Biden is the best candidate to handle racial issues.  Even among black voters, he bests California Sen. Kamala Harris, who pressed Biden on the issue during the first Democratic debate.  Biden apologized for remarks he made about working with segregationist senators in the 1970s at a Saturday campaign event in Sumter, S.C.

A Fox News Poll released Thursday finds Biden leading on an array of other key issues as well.

Overall, Biden garners 35 percent among South Carolina Democratic primary voters in the race for the party’s nomination — over twice the support of any other candidate.  Bernie Sanders receives 14 percent and Kamala Harris is close behind at 12 percent. 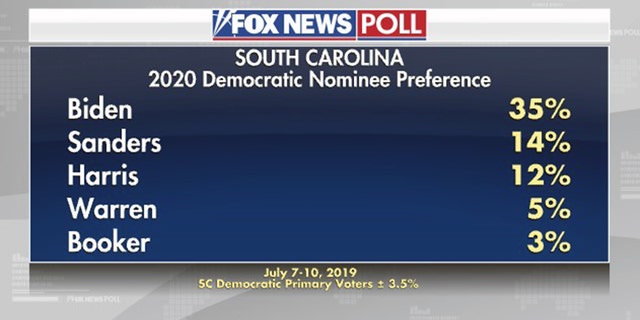 All others trail, including Elizabeth Warren (5 percent), Cory Booker (3 percent), Pete Buttigieg (2 percent), and John Delaney, Marianne Williamson, and Andrew Yang (1 percent each).  One in five is undecided — a group that includes twice as many women (25 percent) as men (12 percent).

Among black voters, Biden’s support hits 41 percent, with Sanders at 15, Harris 12, Booker 4, Warren 2, and Buttigieg, Tim Ryan, and Williamson at 1 percent each. 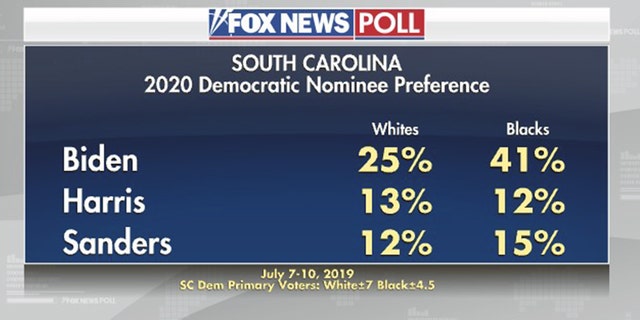 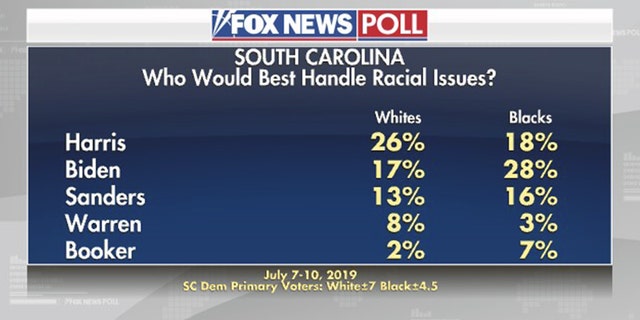 While Biden is preferred over Harris by 3 points on which candidate will best handle racial issues, his advantage increases to 10 points among black voters.  White voters pick Harris by nine. 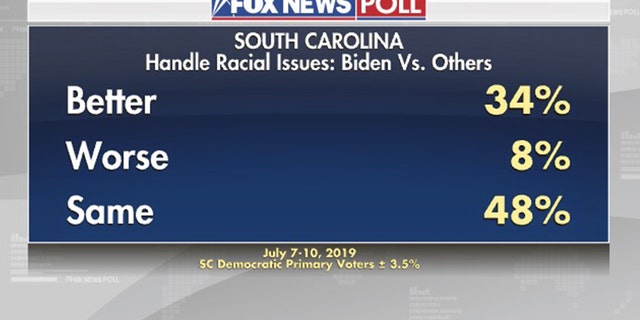 Only 8 percent think Biden would be worse on racial issues than the other candidates, while 48 percent say about the same.

On which candidate is “most in touch with the concerns of people like you,” it’s Biden again:  28 percent compared to 17 percent for Sanders and 15 percent for Harris.  That also holds true among black voters:  Biden (31 percent), Sanders (17 percent) and Harris (16 percent).

"Getting poor reviews for a summer debate performance hasn't undone the fact that Biden has a strong following among both white and black voters in South Carolina.  He's the big dog there," says Republican pollster Daron Shaw, who conducts the Fox News Poll with Democrat Chris Anderson.

Those prioritizing defeating Trump are significantly more likely to support Biden (41 percent) than Harris (14 percent) or Sanders (11 percent).  Biden also comes out on top, albeit by a much smaller spread, among those saying it’s more important to support their favorite candidate:  Biden (29 percent), Sanders (25 percent), Harris (11 percent) and Warren (8 percent).

Overall, 83 percent would be happy with Biden winning the nomination, while 73 percent who would be satisfied if Sanders won, 68 percent Harris, 66 percent Warren, and 59 percent Booker. 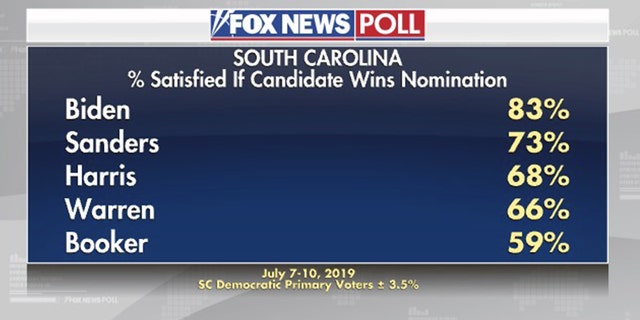 Among black voters, 87 percent would be happy with Biden as the nominee, 79 percent with Sanders, 71 percent Harris, 66 percent Warren, and 62 percent Booker.

In 2016, Hillary Clinton topped Sanders by 73-26 percent in the Palmetto primary.

Conducted July 7-10, 2019 under the joint direction of Beacon Research (D) and Shaw & Company (R), this Fox News Poll includes interviews with 701 South Carolina Democratic primary voters who spoke with live interviewers on both landlines and cellphones and has a margin of sampling error of plus or minus 3.5 percentage points.  Respondents were randomly selected from a statewide voter file and screened to identify potential participants in the Democratic presidential primary.