“Ohioans can’t afford four more years of Mike DeWine as their governor,” Renacci charged as he announced his gubernatorial campaign.

“We have seen what failed leadership can do to a once prosperous state. DeWine’s tenure as governor will be defined as the worst period in Ohio’s long and rich history,” argued Renacci, who spent eight years as a congressman representing a northeast Ohio district “Corruption, indictments, low job creation, shutdowns, rampant crime and more scandals—that is DeWine’s legacy.”

Renacci claimed that DeWine is “more interested in being the Andrew Cuomo of Ohio rather than actually helping everyday Ohioans” and in a campaign video characterized the governor as “a career politician.”

In an exclusive interview with Fox News last month, Renacci panned DeWine’s performance. “If you compare Ohio to other states, he is definitely failing,” Renacci said. “He has not been able to move the needle.”

And he said at the time that he had seen four polls – including one that he commissioned – that all show him leading DeWine in a hypothetical 2022 Ohio GOP gubernatorial primary showdown that would shape up as a clash between the party establishment and loyalists and supporters of former President Donald Trump.

The 62-year-old Renacci, an independently wealthy businessman who built his wealth in auto dealerships and nursing homes before entering politics, was running for governor in 2018. But he dropped out of that race and launched a Senate campaign after encouragement from the then-president. Renacci ended up losing to incumbent Democratic Sen. Sherrod Brown by less than seven points. 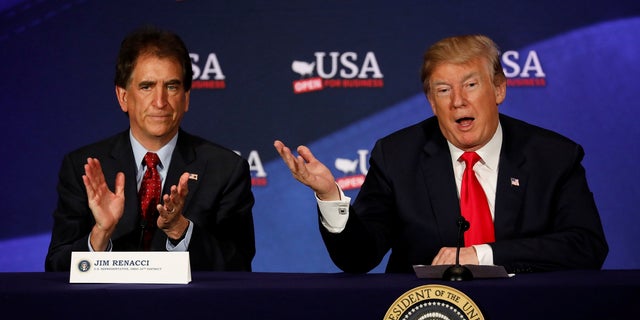 Then-GOP Rep. Jim Renacci of Ohio joined with then-President Donald Trump, in May of 2018 in Cleveland, as Renacci campaigned for the Senate.
(Reuters/Aaron P. Bernstein)

“I have very few regrets in life,” Renacci told Fox News. “My biggest mistake and my biggest regret was that I jumped into a Senate race because people wanted me to jump in, when I was fully prepared and running for governor.”

Renacci explained that “to switch races like that was very difficult … and I really did it based on the request of the president at that time.”

After his 2018 defeat, Renacci took on a new role as chairman of the Medina County Republican Party. And he became a vocal critic of DeWine, who early on in the coronavirus pandemic was one of the most aggressive governors in the nation with respect to quarantine orders to tackle the COVID crisis. Renacci argued that the coronavirus restrictions implemented by DeWine, which won bipartisan praise, put the brakes on the Buckeye State’s economic recovery.

“There’s no doubt it’s tough to beat an incumbent. I have beaten two incumbents in my history” Renacci acknowledged. “I lost to an incumbent in the 2018 race. But I wasn’t prepared in 2018.”

Renacci told Fox News that his name ID “is very strong” and that Trump “has always been a friend of mine.” And he emphasized that Ohio “is not a Republican state. This is not a Democrat state. This is a Trump state.”

In his campaign announcement, Renacci called himself “a true conservative that will fight for America First policies.”

Fox News reached out to the governor’s political team for reaction to the news, but they declined to comment.

While he’s remained neutral in the Ohio governor race to date, Trump’s apparently no fan of DeWine. In November, after the governor acknowledged the legitimacy of now-President Biden’s election victory, Trump hinted in a tweet the next day that DeWine would need a 2022 primary challenger.

DeWine has also defended the decision by GOP Rep. Anthony Gonzalez of Ohio, who was one of the 10 House Republicans to vote in favor of impeaching Trump in the aftermath of the Jan. 6 riot at the U.S. Capitol by extremist Trump backers. DeWine’s said that Gonzalez – who now faces a primary challenge from a Trump loyalist – was “voting his conscience.”