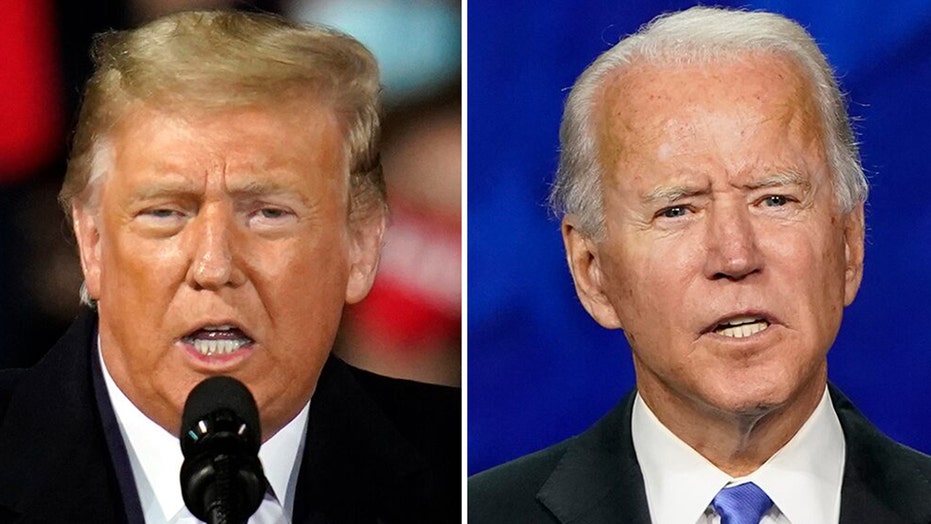 CLEVELAND – In a presidential race that has remained relatively consistent in the polls the past six months, Tuesday night’s debate – the first of three in-person showdowns between Democratic presidential nominee Joe Biden and President Trump – offers an opportunity for Trump to stir the pot and try to move the needle.

And for a president who enjoys breaking with traditions and busting the rules, the debate in Cleveland in front of what’s likely to be a massive television and online audience gives Trump the chance to try and “rattle Biden,” a candidate who’s known for playing by the rules.

But Mo Elleithee, the founding executive director of Georgetown University's Institute of Politics and Public Service and a Fox News contributor, spotlighted that “the fundamentals of this race are good for Biden and they’re not good for Trump.”

Elleithee was pointing to public opinion polls that have consistently given Biden the edge nationally and in many of the key general election battleground states that will decide who wins the White House. “The president hasn’t been able to [move the] needle up until now. It’s been a remarkably static race. The clock is ticking louder and louder. So he needs to find a way in these debates to change the narrative, to change the conversation, and to start to alter the fundamentals of this race,” added Elleithee, a senior spokesman for Hillary Clinton’s 2008 presidential campaign who later served as communications director for the Democratic National Committee.

Elleithee expects Trump to try to find “a way to shift the conversation away from COVID-19, which continues to be the greatest anchor weighing him down.”

The president, his campaign and allied groups for months have tried to paint a portrait of Biden as a candidate beholden to the left of his party. Longtime GOP consultant Jim Merrill predicts Trump will continue those efforts in the debate.

“I think the president will work hard to tie Biden to (Senate Democratic leader) Chuck Schumer, (House Speaker) Nancy Pelosi, and AOC (progressive rock star Rep. Alexandria Ocasio-Cortez of New York) and to spotlight the rise of violence in the streets this summer. He’ll try to push Biden to the left, that he’s too radical to be elected,” explained Merrill, a veteran of numerous Republican presidential campaigns.

The moderator of the debate, "Fox News Sunday" anchor Chris Wallace, last week chose six topics for the 90-minute commercial-free showdown that will be divided into six 15-minute sections devoted to each topic.

The issues include the fierce Supreme Court nomination battle, the worst pandemic to strike the globe in a century, a national economy flattened by coronavirus, the racial justice protests and violence that have flared in cities across the nation, and the integrity of the election. The latter is a crucial issue, considering the president for months has railed against expanded voting by mail, repeatedly charging that it would lead to a “rigged election.” 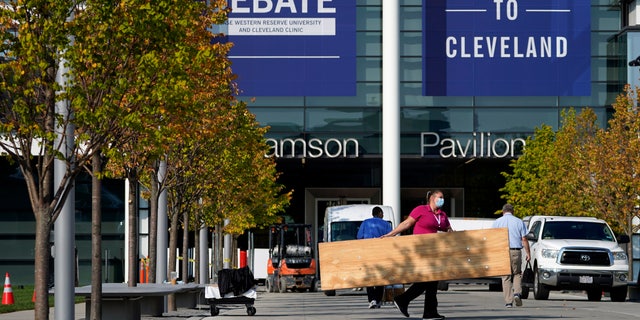 A woman carries a table while setting up outside of the Health Education Campus of Case Western Reserve University ahead of the first presidential debate between Republican candidate President Donald Trump and Democratic candidate former Vice President Joe Biden, Sunday, Sept. 27, 2020, in Cleveland. (AP Photo/Julio Cortez)

Wallace said the sixth topic for the debate will be the records of the current president and the former vice president.

But the format will allow some flexibility for the candidates. And Merrill predicts that Biden will spotlight Sunday’s viral report from the New York Times that details how the president didn’t pay federal income taxes in 10 of the past 15 years. The president has labeled the report “fake news.”

“I think he’s going to drive the tax issue. It’s relevant. It’s topical. I think he’s going to try and drive a wedge and make the case that the president isn't the man of the people he claims to be, and to appeal to White working-class voters in Pennsylvania and Wisconsin. I think that’s what he’ll use tonigDEBATE EXPECTATIONS: DID TRUMP LOWER THE BAR FOR BIDEN?ht,” Merrill said.

Elleithee highlighted that “Biden needs to keep the pressure on Trump when it comes to COVID, keep the president on the defensive on other issues like his tax returns.”

The president’s unpredictability will likely be a factor in the showdown.

“The president is unpredictable. He’s a better debater than people give him credit for. I do think he’s going to try and rattle Biden,” Merrill stressed.

And he forecast that Trump would spotlight a Senate Republican report released last week that found that Hunter Biden’s controversial role on the board of a Ukrainian natural gas company while his father was vice president put State Department officials in an “awkward position.”

“I suspect he will go there on Hunter Biden. I think he’ll show no qualms at all about going after the former vice president’s son,” Merrill said. “And I think what we’ve seen from Biden is that he can get angry and when he gets angry, he makes mistakes.”

Another subplot to keep a watch on in the debate – Biden’s durability. For six months the president, the Trump campaign and allied groups and surrogates have repeatedly questioned the 77-year-old Biden’s mental acuity.

But by lowering the bar for Biden, if the former vice president bears up well during the debate, it would likely be scored a victory by political pundits.

But there’s a flip side here.

“For Trump tonight, a win for him is Biden looking either tired or slow, or gaffing. And we all known Biden’s prone to gaffing. If the president can force Biden into doing that, it’s going to be a good night for him,” Merrill emphasized.