Even in Defeat, Trump Tightens Grip on State G.O.P. Lawmakers

Last week, allies of President Trump accused Republican leaders in Pennsylvania of being “cowards” and “liars” and of letting America down.

Mr. Trump himself called top Republicans in the General Assembly in his crusade to twist the arms of officials in several states and reverse an election he lost. The Pennsylvania lawmakers told the president they had no power to convene a special session to address his grievances.

But they also rewarded his efforts: On Friday, the State House speaker and majority leader joined hard-right colleagues — whom they had earlier resisted — and called on Congress to reject Joseph R. Biden Jr.’s 81,000-vote victory in Pennsylvania.

The extraordinary intervention by the president, and the willingness of some top party leaders to abet his effort to subvert an election, demonstrates how Mr. Trump’s sway over elected Republicans is likely to endure after he leaves office and how his false claims of a “rigged” 2020 vote may inflame the party base for years to come.

Courts across the country have summarily thrown out Mr. Trump’s claims of a stolen election. But 64 Republicans in the General Assembly signed a letter last week urging Pennsylvania’s congressional delegation to reject the state’s Electoral College votes for Mr. Biden.

Kim Ward, the Republican majority leader of the Pennsylvania Senate, said the president had called her to declare there was fraud in the voting. But she said she had not been shown the letter to Congress, which was pulled together hastily, before its release.

Asked if she would have signed it, she indicated that the Republican base expected party leaders to back up Mr. Trump’s claims — or to face its wrath.

“If I would say to you, ‘I don’t want to do it,’” she said about signing the letter, “I’d get my house bombed tonight.”

A major issue facing Republicans everywhere, including those in Pennsylvania — where open seats for governor and the U.S. Senate are on the ballot in 2022 — is whether the party will put forward Trump-aligned candidates in future races. The president lost Pennsylvania, but Republicans made down-ballot gains in two statewide races and picked up seats in the legislature.

“Those who are continuing to beat on this drum that the election was rigged are trying to appease Trump’s base and get their support early on,” said State Representative Ryan Bizzarro, a member of the Democratic leadership.

Mr. Bizzarro said it would be a gift to Democrats if the Republican nominees for governor or Senate who emerge from primaries are remembered for echoing Mr. Trump’s baseless claims of mass fraud from mail-in ballots and his bitter-end resistance to conceding a loss. 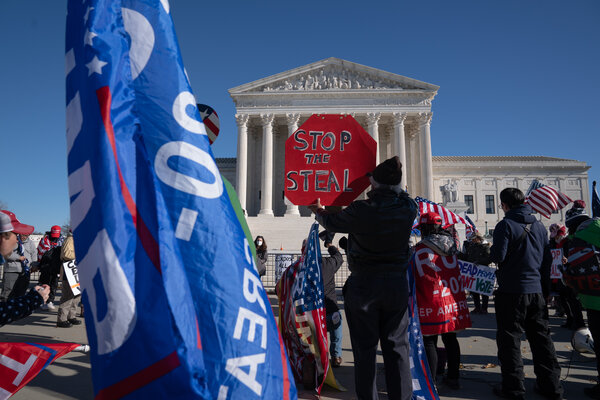 “Forget all the Democrats who voted by mail — look at all the Republicans who voted by mail,” he said. “Are you saying their voice isn’t as important as the fringe who are blind to facts and the ways our Constitution clearly lays out elections?”

On Tuesday, the U.S. Supreme Court became the latest of dozens of tribunals to throw out a case brought by Trump allies, in this instance a Pennsylvania congressman and a losing congressional candidate. They had sought to invalidate the state’s 2.6 million mail-in votes, 77 percent of which were cast for Mr. Biden.

Republicans argued that a 2019 state law authorizing no-excuse mail voting was unconstitutional, although it passed the Republican-led legislature and was signed by Gov. Tom Wolf, a Democrat.

Earlier, the Pennsylvania Supreme Court ruled against the same plaintiffs, one of whom was Sean Parnell, a former Army Ranger and a favorite of Mr. Trump’s who occasionally appears on Fox News. He lost his race for Congress to Representative Conor Lamb but has been mentioned as a potential statewide candidate in 2022.

A Republican strategist in Pennsylvania, Charlie Gerow, expressed doubts that the trench fighting by party members over the legitimacy of the election would cast a stigma over Republicans in the midterm elections. “There will be so many candidates for statewide office that what happens in December 2020 will have very little bearing, in my judgment, on what happens in 2022,” he said.

Nearly every state has certified the results of its election, and Mr. Biden has secured the 270 electoral votes needed to become the next president when the Electoral College meets on Monday.

Nonetheless, the more than 60 Republicans in the Pennsylvania legislature — about half of the party’s total caucus — urged Congress to take one last stand for Mr. Trump and object to the state’s Biden electors.

For a challenge to an electoral slate to proceed requires the endorsement of one member of the House and one senator when Congress meets in joint session on Jan. 6 to accept the electoral votes. Both chambers would then meet separately to debate and vote on the objection. The Democratic-led House would almost certainly reject any challenge.

“I’d bet my last dollar that vote will fail,” said Representative Matt Cartwright, a Democratic member of the House delegation from Pennsylvania. “But what will be really interesting is to see which of the Republican members have the courage to ignore that request from Pennsylvania’s General Assembly.”

It is also unclear whether any senator will endorse the challenge. Pennsylvania’s top elected Republican, Senator Pat Toomey, said through his office that he would not support one. In an interview on Tuesday with The Philadelphia Inquirer, Mr. Toomey, one of only about two dozen Republicans in Congress who have openly acknowledged Mr. Biden’s victory, said it was “completely unacceptable” for Mr. Trump to pressure state lawmakers to reverse election results.

In January 2017, an effort by a handful of Democrats in the House to challenge Mr. Trump’s electoral votes went down to defeat when no senator would join them. (Mr. Biden, presiding over the Senate as vice president, declared, “It is over.”)

The last time an electoral challenge in Congress resulted in an actual debate was in 2005, when Ohio’s slate of votes for President George W. Bush was challenged, though that challenge was unsuccessful after the House and Senate met to vote.

Mr. Toomey’s decision not to seek a third term in 2022 has accelerated the jockeying in both parties to succeed him. The profiles of several of the Republicans thought to be contemplating campaigns for the Senate or for governor have risen as they have acted as champions of Mr. Trump’s most outlandish assertions of a hijacked election.

State Senator Doug Mastriano organized a hearing in a hotel in Gettysburg last month, at which the president’s personal lawyer Rudolph W. Giuliani aired false charges about the election, including an assertion that mail-in ballots in Philadelphia were “not inspected at all by any Republican.” The claims were debunked in real time on Twitter by a Republican member of the Philadelphia elections board.

Few people at the Gettysburg hearing wore masks, and Mr. Giuliani later tested positive for the coronavirus. Invited to the White House, Mr. Mastriano, a retired Army colonel said to be mulling a race for governor, reportedly learned there that he, too, was infected with the virus.

Last week, Republican leaders in the legislature at first pushed back on allies of the president who were pressuring the lawmakers to intervene and demanding that they name an alternate delegation to the Electoral College to vote for Mr. Trump.

In a joint memo, the Republican leaders said they had no authority to ignore the certified election results and appoint their own electors.

Trump allies denounced the leaders. Mr. Giuliani claimed in a tweet that they had “let down America,” and he called on “all of us Republicans to let them know what we think of them.”

Soon after, the two top Republicans in the Pennsylvania House — Bryan Cutler, the speaker, and Kerry Benninghoff, the majority leader — joined backbenchers in calling for Congress to block the Biden electors. Their letter justifying the challenge included claims of election violations that have been repeatedly rejected by state and federal courts. Mr. Trump twice called Mr. Cutler in recent days.

Through a spokesman, Mr. Cutler declined a request for an interview. The spokesman, Michael Straub, said the president “did not directly pressure Cutler to overturn the results or seat rival electors.” The House speaker told the president that the General Assembly was not in session and only the governor could call it back.

Mr. Cutler, 45, was chosen as speaker in June. To keep his job, he faces an election in the full House in January. He is under pressure to hold his caucus together, including its far-right members. He did not initiate the letter to Congress, according to his spokesman.

“That letter had been planned separately by rank-and-file members, and Cutler signed it,” Mr. Straub said.

Lates News:
2020-12-09
Previous Post: Bitcoin Drops Below $18k Due To Whale Sell-Off – Should You Buy The Dip?
Next Post: BBC’s Laura Kuenssberg warns N.I. deal makes it ‘easier for Boris to walk away’ from talks