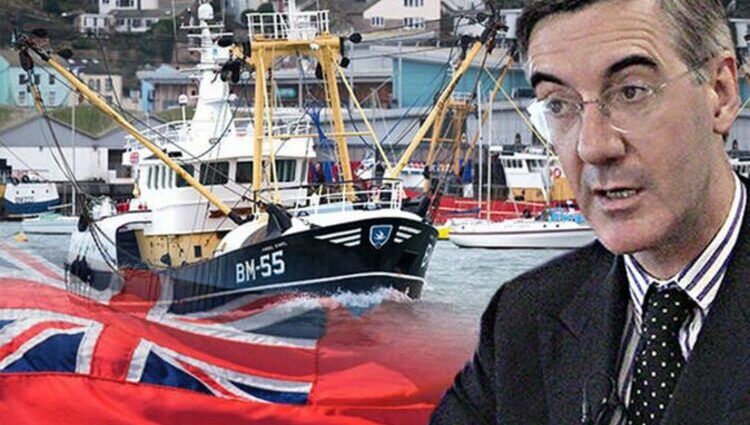 Jacob Rees-Mogg conceded the European Union had made amelioration to its regulation in the year since the UK officially left the bloc but insisted more could be done. The Brexit Opportunity Minister suggested the initial difficulties for British fishermen were the result of Brussels seeking to voice its upset at the UK leaving. But he insisted the desire for bloc members to buy British-caught fish will ultimately result in further changes to the export checks.

Speaking to LBC, Mr Rees-Mogg said: “They have made some amelioration to their rules since we finally left because they actually want to buy these goods.

“It becomes market forces that determine what the level of regulation becomes.

“But initially, we have to remember, the EU was very cross that we left, and they wanted to make life as difficult as possible.”

He continued: “The issue here is that, of course, the rules that the EU applies on the UK are not under our control.

“They have a freedom to apply rules to us and we do to them but we obviously want to support the fishing industry.

“And support it by the fact it has new independence.

“And independence will grow because there is a temporary scheme to allow foreign fishing but that will end eventually.”

He added: “It’s about ensuring that the British fisherman is able to get to the best stocks in UK territorial waters.

“Ultimately, if the EU or member states of the EU want to import these goods, they will have to make it reasonable to do so.”

Andrew Bowie hits out at SNP for 'point scoring' over fisheries

Fisheries was one of the leading points of contention throughout the Brexit negotiations between the UK and the EU.

British fishermen maintained they were being undercut by the Common Fisheries Policy (CFP) allowing EU vessels to fish in UK waters.

The British Government argued the industry would receive a well-deserved boost after Brexit, with more independence and larger quotas becoming available.

But a study conducted jointly by the Universities of York and Lincoln with the marine consultancy firm ABRmer found the radical reforms being promised to revitalise the industry have yet to be delivered on.

Dr Bryce Stewart at the University of York said: “Government promises on Brexit and its benefits for the fishing industry were far in excess of what could be delivered.

“The industry became an icon of Brexit with claims it would correct past injustices and breathe new life into neglected coastal communities, but our study reveals the stark delivery gap between rhetoric and reality.”

Dr Stewart warned that small-boat fishermen are at risk of being worse off as they are at higher risk of being hindered by additional red tape.

He continued: “Most of the significant increases in catch quotas are for just a few fisheries such as western mackerel and North Sea sole and herring.

“Most fishermen, particularly those in small boats, have seen few if any benefits, so due to new challenges around trade are likely to be worse off.

“Many people in coastal communities who were pinning their hopes on post-Brexit reforms feel betrayed and this comes at a significant cost to their wellbeing and mental health.”