EU on brink as huge rows break out on Brexit concessions 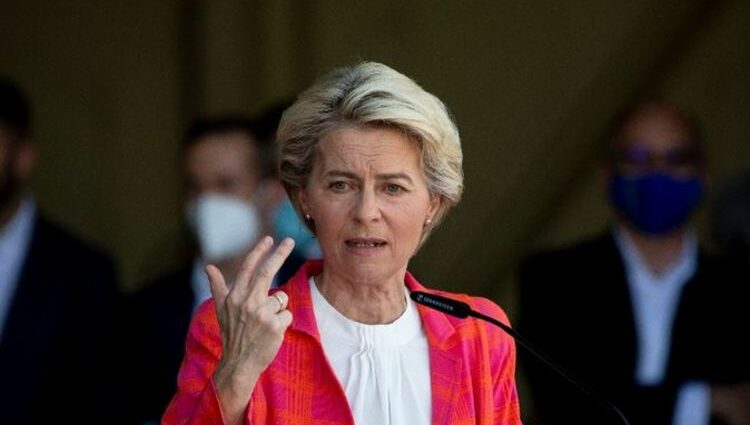 Brussels is facing a major row over the concessions made to Britain over the Brexit Protocol by European Commission vice president Maros Sefcovic. Mr Sefcovic announced in a press conference on Wednesday that the EU was willing to 80 percent reduction in checks and regulations for all retail goods travelling into Northern Ireland. However, the move has sparked infighting within the bloc as the leaders of some member states fear Brussels is being “too generous” towards Britain.

Sky News Europe correspondent Adam Parsons said: “It is definitely a set of concessions that go further than some people were expecting.

“Including some people within the European Commission, I am told there were some pretty rancorous disagreements over whether or not the EU should over quite so much at this stage.

“Even some member states of the EU who think this is all a bit too generous.

“So on that front, it is an olive branch but crucially one element that is missing is any compromise on the European Court of Justice.”

Maros Sefcovic has announced the European Union is willing to drop “more than 80 percent” of the checks currently required to ship dairy and meat products to Northern Ireland from the UK.

The move marks a major concession from the EU Commission on the Brexit protocol and would see the vast majority of restrictions on the flow of animal goods in and out of Northern Ireland lifted.

Mr Sefcovic told a press conference in Brussels that the EU had agreed to a “80 percent reduction of checks and controls required” for diary and meat goods for sale in Northern Ireland.

He said: “Let me illustrate what this means, imagine you are a Northern Ireland business importing products of animal origin like yogurts, cheese, or chickens from Great Britain.

“More than 80 percent of the identity and physical checks previously required will now be removed.

“This will significantly use the process for bringing food supplies from Great Britain to Northern Ireland.”

He continued: “Similarly a lorry transporting different food products like dairy, meat, fish, fruit and vegetables from Great Britain to supermarkets in Northern Ireland will now just need one certificate stating all goods of different types, class or description meet the requirement of EU legislation.”

However, Mr Sefcovic refused to budge over the role of the European Court of Justice as the final arbiter in alleged breaches of the protocol.

Mr Sefcovic told the press conference he want to stay on a “positive note,” when pressed on the issue by a reporter.

“That is something that would bring enormous pluses for the Northern Ireland economy. It is very clear that you cannot have access to the single market without the supervision of the European Court of Justice.

Lates News:
2021-10-13
Previous Post: ex-Ronald Reagan aide says Biden must be allowed to ‘continue to fail’ so party ‘diminish’
Next Post: 5 things to know before the stock market opens Wednesday