Sir Vince Cable said the current leadership race is “not representative” of the UK electorate, as the new Prime Minister will be chosen from just 160,000 Tory party members. The remain-backing politician said Britain’s new leader will be chosen by party members that are predominantly over 55 and wealthy and described party voters as a “selectorate” – and warned they will face an even bigger uphill battle than before. Writing in POLITICO on Monday, Sir Cable warned the new leader – which will be decided between frontrunner Boris Johnson and foreign secretary Jeremy Hunt – will “face an anti-Brexit front more united than ever before” as they fight their way out of “toxic sludge”.

Mr Cable wrote: “Parties such as the Liberal Democrats, the Greens and Plaid Cymru are starting to work together for the greater good.

“We’re putting aside our differences and focusing on doing everything collectively to stop a no-deal Brexit — and, indeed, to stop Brexit altogether.”

The Lib Dem leader also highlighted the importance of the forthcoming Brecon and Radnorshire By-election for remainers. 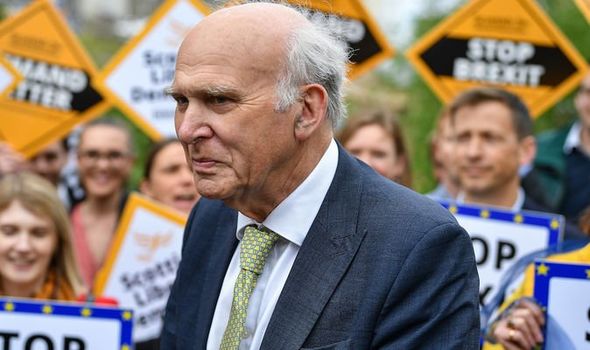 In the upcoming Brecon and Radnorshire by-election, Welsh party Plaid Cymru has endorsed the Liberal Democrats because we offer the clearest chance of victory for pro-European voters.

“The Green Party has also decided to stand aside. That means anyone wanting to elect a candidate who is committed to stopping Brexit will be voting for the Lib Dems’ Jane Dodds, maximising the chances of taking back this Welsh seat from the anti-European Tories.” 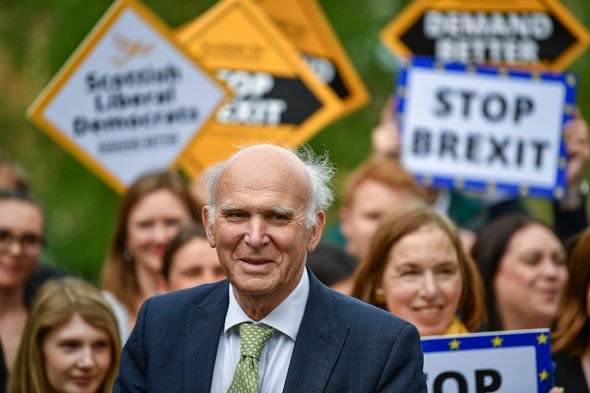 Continuing, he wrote: “Faced with these challenges, we must realise collaboration is not a dirty word and seize this new momentum.

“Those of us in pro-European, internationalist parties can show how collaborative politics should be conducted in the 21st century — and save this country from destroying itself in the process.

“The alliance we and our partners formed for the Brecon and Radnorshire by-election should become a blueprint not just for politicians, but for voters too.

“By reaching out to our fellow pro-Europeans, we are showing voters what can be achieved when traditional party loyalty is set aside in order to make a significant difference at the ballot box.”