Federal authorities are examining whether Rep. Matt Gaetz, R-Fla., obstructed an ongoing investigation during a telephone call involving a witness, a person familiar with the matter said Thursday.

The obstruction inquiry, first reported by Politico, grew out of an existing investigation into whether Gaetz had a sexual relationship with a minor.

The telephone call at issue involved Gaetz’s ex-girlfriend and a witness, and at some point during the call Gaetz joined the conversation.

The source, who is not authorized to speak publicly about the matter, declined to elaborate on the nature of the discussion.

Federal authorities have been investigating whether Gaetz had sex with an underage girl, then 17, and paid for her to travel with him. The three-term congressman who represents the Florida Panhandle has not been charged with a crime. He has denied any wrongdoing and argued that he is the victim of a complicated extortion scheme. 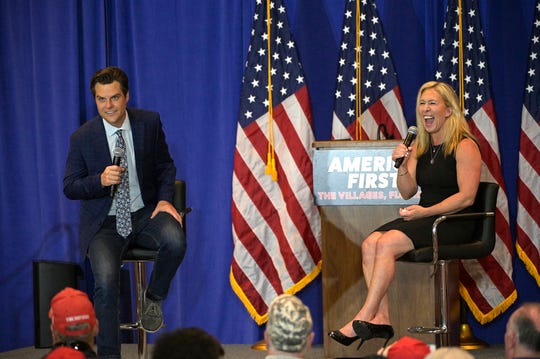 Justice Department officials declined comment Thursday. Gaetz’s representatives did not respond to inquiries from USA TODAY. In a statement to Politico, a spokesman for the congressman again denied any wrongdoing.

“After two months, there is still not a single on-record accusation of misconduct, and now the ‘story’ is changing yet again,” the statement said in part

Gaetz declared in an April 5 column for the Washington Examiner that “first, I have never, ever paid for sex. And second, I, as an adult man, have not slept with a 17-year-old.” He went on to write that he was “absolutely not resigning.”

Republicans mostly have kept silent about Gaetz since the probe was announced, though Rep. Adam Kinzinger, R-Ill., has called for his resignation.

And former House Speaker John Boehner, once the nation’s highest-ranking Republican, told USA TODAY that Gaetz should resign if he is indicted. If the Florida congressman refuses, Boehner said, House GOP Leader Kevin McCarthy should move to expel him.