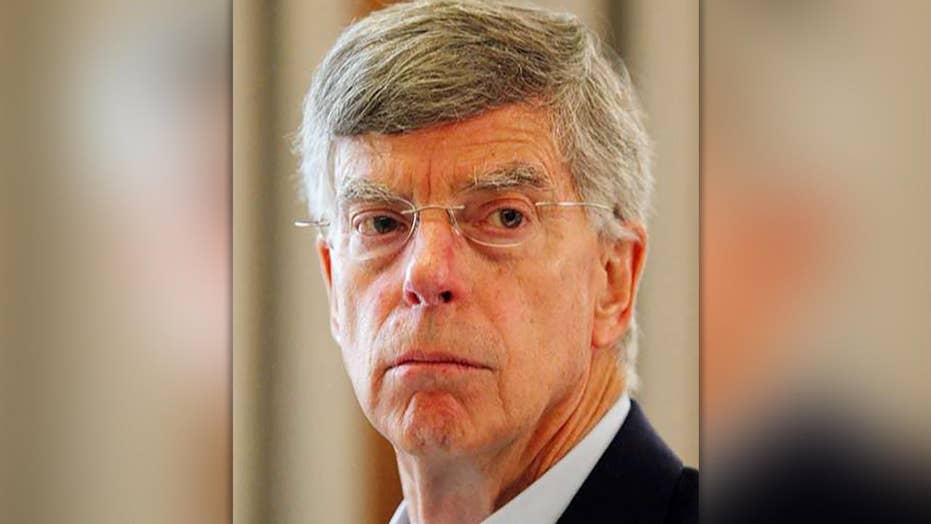 Top diplomat in Ukraine Bill Taylor, who said it’s ‘crazy to withhold security assistance for help with a political campaign’ in a text message, will be questioned by House Democrats; Catherine Herridge reports from Capitol Hill.

Bill Taylor, a top U.S. diplomat in Ukraine who has emerged as a key figure of interest in the Trump impeachment inquiry, told Congress on Tuesday that there were "two channels" for Trump administration policymaking on Ukraine — "one regular, one irregular."

Taylor's testimony in a closed-door deposition before several House committees was described to Fox News by sources familiar with the session. The acting ambassador to Ukraine is seen as a key witness in the probe of whether President Trump was engaged in a "quid pro quo" by holding up aid to the country amid a push for politically related investigations, with lawmakers focusing on his past text messages discussing Trump's dealings with Ukraine.

EXPANSIVE DURHAM PROBE COULD GIVE TRUMP AMMO AMID IMPEACHMENT FIGHT

According to sources, the State Department tried to keep Taylor from testifying. But the Intelligence Committee issued a subpoena, making Tuesday’s appearance a “deposition.” Taylor is complying with the subpoena and answering questions from both sides.

Text messages recently turned over to Congress showed Taylor and other U.S. officials battling internally last month over Trump’s efforts to encourage Ukraine to investigate Hunter Biden’s past business practices in the country amid discussions over U.S. military aid to Ukraine. Hunter Biden is the son of Joe Biden, the former vice president and Democratic presidential candidate.

"As I said on the phone, I think it's crazy to withhold security assistance for help with a political campaign," Taylor said in a September text exchange.

Sondland, who has also testified on Capitol Hill, responded to Taylor's text message at the time by saying, "Bill, I believe you are incorrect about President Trump's intentions. The President has been crystal clear: no quid pro quo's of any kind. The President is trying to evaluate whether Ukraine is truly going to adopt the transparency and reforms that President Zelensky promised during his campaign."

Both men then agreed to cease discussing the matter over text, noting that phone calls with the appropriate officials would be preferable.

As for Tuesday's testimony, Taylor was described to Fox News as a "good" witness for Democrats and, on balance, "not good" for Republicans. But Fox News is told Taylor did not deliver new evidence to strengthen Democrats' impeachment push.

The sources said Taylor had no firsthand knowledge or other direct evidence that Ukrainian officials knew that aid to the country had been suspended at the time of the July 25 call between Trump and President Volodymyr Zelensky.

Congressional Democrats on Tuesday said they wanted more information on the text messages.

Republicans, meanwhile, have accused Democrats of restricting access to the transcripts from the interviews they’ve been conducting as part of the impeachment inquiry.

“Just when you thought the process couldn’t get any more unfair, we found out last night that Democrats will now not even allow Republicans to have a copy of the respective transcripts from each of the witnesses we’ve interviewed thus far,” said Ohio Rep. Jim Jordan, claiming that Republicans can’t make copies and can only read them while under supervision by Democratic staffers.

Taylor was tapped to run the U.S. Embassy in Ukraine after the administration abruptly ousted the ambassador. He was then drawn into a Trump administration effort to hold up U.S. military aid for Ukraine.

Taylor had been serving as executive vice president at the U.S. Institute of Peace, a nonpartisan think tank founded by Congress, when he was appointed to run the embassy in Kiev after Ambassador Marie Yovanovitch was removed before the end of her term, following a campaign against her led by Giuliani.

He was chosen for the post because he was among a handful of former officials with experience in Ukraine who would be perceived as neutral by local officials and wouldn't raise objections at the White House, according to a colleague.

Trump had his now-famous phone conversation in July with Zelensky, in which he pressed him to investigate claims about Democratic rival Joe Biden, as well as issues related to election interference in 2016. Trump at the time had quietly put a hold on nearly $400 million in military aid that Ukraine was counting on in its fight against Russian-backed separatists.

Fox News’ Chad Pergram and Sally Persons and The Associated Press contributed to this report.