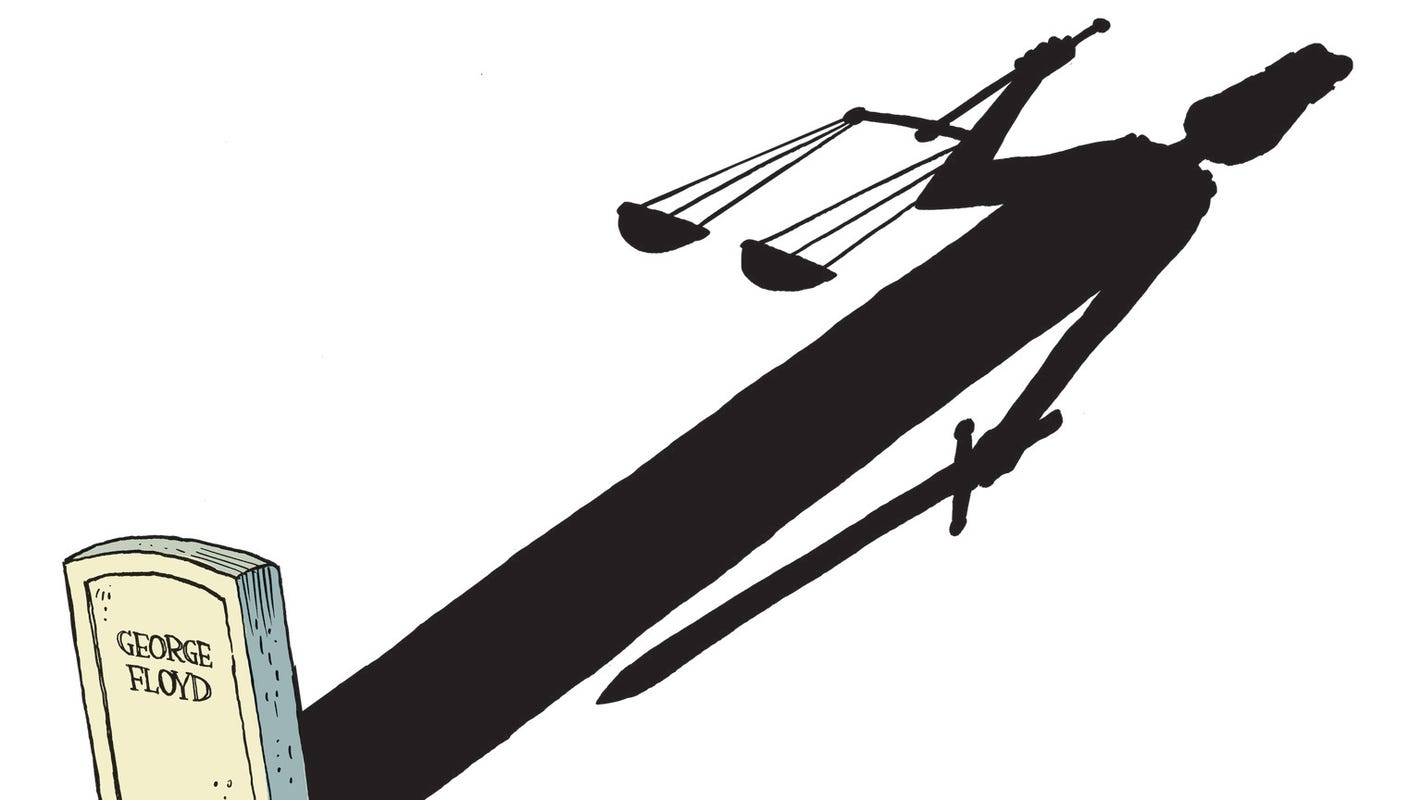 In today’s fast-paced news environment, it can be hard to keep up. For your weekend reading, we’ve started in-case-you-missed-it compilations of some of the week’s top USA TODAY Opinion pieces. As always, thanks for reading, and for your feedback.

“Why didn’t anyone intervene to save George Floyd’s life in Minneapolis? They had more than 9 minutes to do it while he was under Derek Chauvin’s knee, but no one did. Some in my diverse group of longtime friends wondered about this recently on Facebook — why no bystander bolted forward to break the chokehold, even knowing they’d be arrested.”

“The White House wants $174 billion of that directed toward boosting electric car sales. Fossil fuel use in transportation is significant, and gas-guzzling autos are one reason why. Electric cars — admittedly cleaner by almost every metric — offer relief. Well, they would if people could actually afford them. Forgoing gas is pricy, preserving the status quo less so. Which explains why only 2% of autos sold annually are powered by electricity.”

3. After Columbine shooting, I combed through the internet’s dark corners. Will we ever learn?

“Remember, these were the early days of the World Wide Web. Computers weren’t in every home, websites and chatrooms were rudimentary and, for the most part, cellphones were just that — phones. In the decades since Columbine, the number of internet users has skyrocketed. Now, over 4.6 billion people around the world are creating 2.5 quintillion bytes of data daily. The sheer volume of information being shared online is mind boggling.”

4. Is Chauvin guilty verdict a guarantee? It should be, but Black America knows why it’s not

“During the first days, we all saw what seemed like an endless loop of horrifying moments captured on police bodycams: witnesses standing on the sidewalk near Cup Foods begging Chauvin to stop; close-ups of Chauvin’s knee on Floyd’s neck; and a grown man lying prone, helpless on the street, crying for his mother. He was dying at the age of 46, just a year younger than I am now.”

5. Derek Chauvin is guilty of murdering George Floyd. Black lives do matter – this is history for America

“I gathered with angry, hopeful, scared Minnesotans outside the Hennepin County Government Center. I was here to do my job, but it felt like my chest was going to explode. I feel this pain, this frustration, too. See, I’m Black. I have young nephews, and I pray for their safety nightly. I see how quickly a traffic stop can go left, how quickly a Black man can be killed.”

“By the time this column is published, I will no longer be alive. I have been fighting terminal liver cancer since it was discovered in May 2018. This disease has two major causes, hepatitis infection, or cirrhosis from alcohol consumption. I have neither. But when I was diagnosed, I was too afraid to think about where the 7-inch tumor on my liver came from. I just wanted it out of my body. It wasn’t an option.”

7. Derek Chauvin was convicted, but the public still hasn’t won

By The Editorial Board

“The truth is that it took a mountain of prosecution evidence to convict one brutal cop of murdering a Black man during the simple act of arresting him for allegedly using a $20 counterfeit bill to buy cigarettes. Will Chauvin’s conviction actually deter others like him, or cause brethren officers to step forward and report misconduct? There are clues from the trial. Chief among them the video image of Chauvin.”

“When I began working on a biography of the House speaker two years ago, the deadline to my publisher was Labor Day 2020, with an extension carved out to submit a final chapter right after Election Day. The theory: Early in the election year Pelosi would be supplanted as the leading Democratic counterpart to President Donald Trump by the party’s presidential nominee, whoever that turned out to be. That would leave time and space to assess the most powerful woman in American history. Then election night would settle Trump’s future and the success of Pelosi’s stand against him.”

9. High school students: Police don’t belong in schools. Here’s how we forced them out.

“Los Angeles Unified School District (LAUSD) has one of the largest school police departments in the country. Black students make up less than 9% of the district, but between 2014 and 2017, 25% of all citations, diversions and arrests made by school police were of Black students. We have been targeted and criminalized for everything from dehydration to depression, accused of using drugs or being thugs, and even pepper-sprayed while walking to class. We have not been looked at as young, gifted, Black children who deserve investment and support.”

“And yet, when one thinks of Walter Mondale, who died Monday at the age of 93, failure is the last word that comes to mind. In his long political career, he fought for, and believed in, helping those who could not help themselves. He believed in government as a positive force. He believed in the goodness of others. Thoughts not widely found in today’s politics. A determined liberal, he fought for civil rights and a strong labor movement and was a strong opponent of U.S. involvement in Vietnam.”