MPs will continue to follow the two-metre social distancing rule in the House of Commons – despite the PM’s ‘one-metre plus’ measure coming into force in England from 4 July.

Politicians in Westminster will continue to maintain extra distance through the summer until a review on whether the measures should change in September due to the coronavirus pandemic.

Previously, Commons leader Jacob Rees-Mogg said he wanted colleagues to “set an example” to the rest of the country, as lockdown is eased over the next few months.

But he sat on the committee that has decided to keep rules as they are for MPs. His office said: “Jacob’s priority has always been that the commission follows the latest health advice as they did today.”

The decision was reached after a meeting with Public Health England on Monday.

A Labour source said: “It’s back to the drawing board for Boris Johnson’s plan to get a mob behind him at Prime Minister’s Questions.” 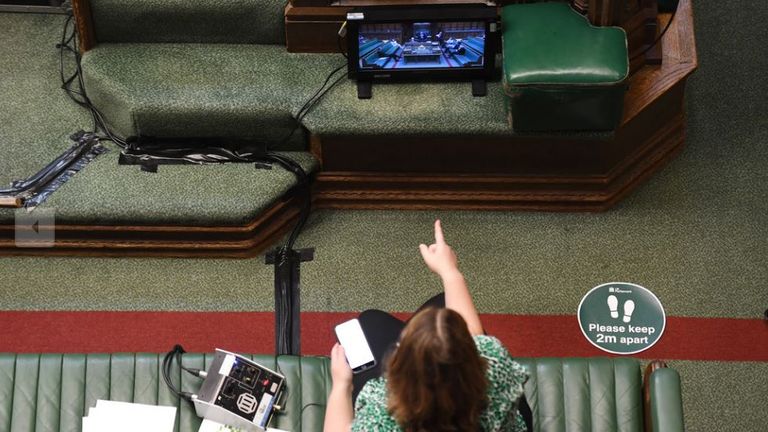 A decision on whether peers should follow the same approach or change to a minimum of one metre will be made later this week.

Boris Johnson has announced that from 4 July, people in England will be required to keep “one-metre plus” apart from others, while also taking measures to mitigate the risk of transmitting COVID-19.

“Where it is possible to keep two metres apart, people should,” the prime minister said last week.

“But where it is not, we will advise people to keep a social distance of one-metre plus, meaning they should remain one metre apart while taking mitigating measures to reduce the risk of transmission.”

The announcement was made to help more bars and restaurants open, given many complained they could not break even by limiting the number of customers to the levels needed to comply with two-metre distancing.

Social distancing measures were brought into parliament at the end of March, after coronavirus infections spread between a health minister, the health secretary and the prime minister.