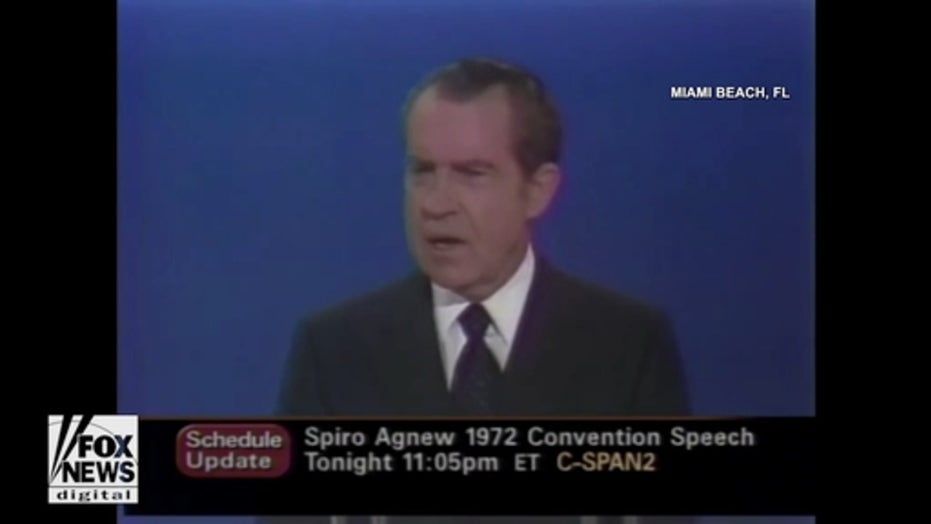 On the eve of the 1972 presidential election, when millions of Americans would go to the polls deciding whether to reelect him, Richard Nixon reserved time on television for an address to the nation. What he said then offers an important blueprint for Donald Trump as he seeks to speak to the nation next week during the Republican National Convention.

President Nixon, who also was my grandfather, will of course not be there in person. But he might be able to offer something in spirit.

Speaking not from the Oval Office but from the White House library, surrounded by shelves full of the wisdom of the ages, Nixon said he did not intend to use the time allotted to him for an attack on his opponent. Nor would he discuss a litany of issues or make a lot of campaign promises. No, instead he urged Americans to “look to the future.”

KAY COLES JAMES: FIGHT FOR AMERICA – VOTERS MUST DO THIS TO STOP SOCIALISM AND ANARCHY

He told the nation: “I want to complete the foundations for a world at peace – so that the next generation can be the first in this century to live without war and without the fear of war.”

At the time he spoke, America was still deeply involved in conflicts at home and abroad. There were still American troops in Vietnam (though Nixon’s secretary of State, Henry Kissinger, would soon be awarded the Nobel Peace Prize for efforts to end that war.) There were still protests on city streets. The Cold War and the nuclear threat from the Soviet Union still loomed over us.

But Nixon managed to project himself convincingly as a man who sought to ease tensions. My grandfather had fought nobly in World War II and was a fierce defender of American interests during the Cold War. But he was, in his heart, still the Quaker boy his mother had raised who believed in the cause of peace.

What many people did not know at the time was that the Nixon campaign had been advised, by pollster Robert Teeter, to highlight “world peace” as one of the president’s strengths. In an August 1972 memo, Teeter advised: “I think it is particularly important that the campaign show the breadth of the president’s foreign policy accomplishments and that they always be interpreted as furthering the cause of world peace.”

Following this advice, Nixon made the cause of peace the central issue of his reelection campaign. And he had an enviable record to show for it.

He was working hard to bring an end to the war in Vietnam. He made progress in dialing down the threat of nuclear war with USSR through the Strategic Arms Limitation Talks (SALT) and the signing of the Anti-Ballistic Missile Treaty. He kept up American diplomatic engagement in Middle East peace efforts. And, of course, 1972 saw the historic overture to China that resulted in Nixon’s landmark meeting with Mao Zedong. The American people clearly found this impressive enough to return Nixon to office in the election that year.

President Trump, too, has a strong record of serving the cause of peace – in some ways, even stronger than Nixon’s.

Although it may come as surprise to his critics, who tend to find him bellicose, President Trump, too, has a strong record of serving the cause of peace – in some ways, even stronger than Nixon’s. Just this month, a U.S.-brokered deal was announced that would make the United Arab Emirates the third Arab nation, and the first Gulf state, to achieve full diplomatic relations with Israel. This historic achievement will do much for regional harmony and could pave the way, even tentatively, for greater cooperation between Israel and its neighbors.

Elsewhere in the region, Trump has reduced the threat of the once-formidable ISIS terror group, cutting off their head with the death of their leader Abu Bakr al-Baghdadi and rolling back their so-called caliphate that once included wide swathes of Iraq and Syria. He did this, crucially, through a strategic campaign without another full-scale invasion. At the same time, the number of our troops in Afghanistan and Iraq have been reduced, with an American withdrawal from these decades-long wars increasingly looking, finally, like a reality.

Another diplomatic success, which likely would have been heralded as a world-changing event had it occurred under Barack Obama, was Trump’s dramatic overtures to North Korea. Trump became not only the first U.S. president to meet a North Korean leader at his historic summit with Kim Jong-Un in Singapore in 2018, but later became the first to visit North Korea when he stepped over the line at the DMZ to shake Kim’s hand the following year. The relationship, like all diplomatic engagements, has had its ups and downs since then, but the critical nature of that first meeting cannot be undervalued.

Joe Biden, as the nominee of the traditionally-dovish political party, seems to have an automatic claim to the mantle of “peacemaker.” But the reality is that Biden’s decades-long career in government has left him with a foreign policy record that has been questionable from the beginning. In 1975, as a young senator from Delaware during the end stages of the Vietnam War, he spoke out against the rescue and resettlement of South Vietnamese civilians facing communist persecution.

Decades later, not only did Biden support the wars in Iraq and Afghanistan, his suggested solution to keep the peace in Iraq showed only marginally more concern for the people living there than he had expressed for the South Vietnamese. Biden proposed dividing Iraq into three semi-autonomous ethnic and religious enclaves, which would only have further cemented the divisions that fomented the sectarian strife plaguing that country.

Robert Gates, who served as secretary of Defense under President George W. Bush and later with Biden in the Obama administration, had a long body of work from which to draw when he famously wrote in his 2014 memoir Duty that Biden had “been wrong on nearly every major foreign policy and national security issue over the past four decades.”

Last year, as the prospect of a Biden nomination inched closer, Gates said “I stand by that statement” when asked about it by Margaret Brennan of CBS.

Americans will no doubt have a great many issues to consider when they make their choice between Trump and Biden in November. But we should remember to follow Nixon’s advice to “look to the future.” In doing so, we must separate the signal from the noise and look for the candidate who truly has done more to advance the cause of peace.