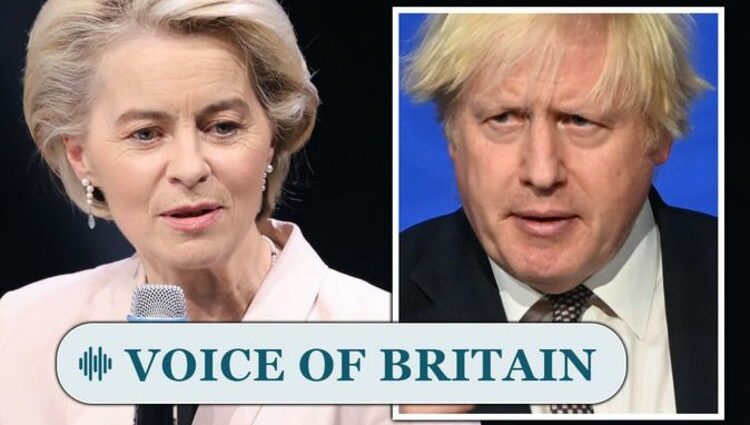 Brexit ‘has been a success’ says Lee Anderson

London and Brussels remain locked in a spat over the complex border in Northern Ireland as well as fishing licences for EU vessels in UK waters. Brexit minister Lord Frost held talks with his EU counterpart Maros Sefcovic on Friday and admitted “significant” gaps still remain on the Northern Ireland Protocol – created to prevent a hard border.

On Monday, a senior EU official shifted the blame and insisted the UK was aware that the Trade and Co-Operation Agreement (TCA) signed last December would create “practical problems” and called on Britain to “face up to the consequences”.

He told Channel 4 News: “We don’t think it’s our role now every time a problem does come up, which creates political difficulties for the UK, to start trying to solve the UK’s problem on its behalf.

“I mean there is a point at which we have to say, especially given the UK’s position on the Northern Ireland Protocol, to say you simply have to face up to the consequences of your choices.”

The UK negotiating team has persevered with working closely with the EU to find common ground, but the decision has sparked anger from a number of Express.co.uk readers, with many arguing the UK should be free to go its own way.

Commenting on a previous story, Yeravinalarf said: “I thought Brexit would mean Britain would go off and do its own thing.

“But I underestimated the whingeing capacity of Brexiters. They simply cannot let go of the EU’s coattails.”

Euripedes said: “We should have left with no deal and sorted out trade with the EU on a level playing field, their choice to continue with their trade surplus with us or to hide behind EU bloc rules, I think they would have gone with continuing trade.”

Thornintheside added: “It is only a crisis for the EU – trying to protect their borders without disturbing the Good Friday Agreement. The UK has no such constraints as it does not feel the need to protect its border with Ireland.

Reasonable added: “Crisis??? What crisis? A period of readjustment following us securing our freedom that’s all.”

The Northern Ireland Protocol ties Belfast to the EU’s regulatory framework and has resulted in increased checks on goods moving from Great Britain.

Unionists say this has effectively placed a trade barrier down the Irish Sea and undermined the integrity of the UK.

Lord Frost is pushing for checks to be relaxed and the removal of the oversight of the European Court of Justice (ECJ) in any future disputes.

The EU has previously put forward plans to slash checks on up 80 percent of goods deemed at risk of entering the single market, but refused to budge on the role of the ECJ.

Following the latest round of talks, Lord Frost confirmed the UK remained ready to trigger Article 16 of the Protocol, which would suspend parts of the agreement.

In a statement, he said: “I made clear that the UK still wanted to find a negotiated solution if that was possible and was ready to keep working constructively and intensively to that end.

“Nevertheless the gap between our positions is still significant and progress on many issues has been quite limited.

“Our position remains as before: that the threshold has been met to use Article 16 safeguards in order to protect the Belfast [Good Friday] Agreement, if solutions cannot be found.”