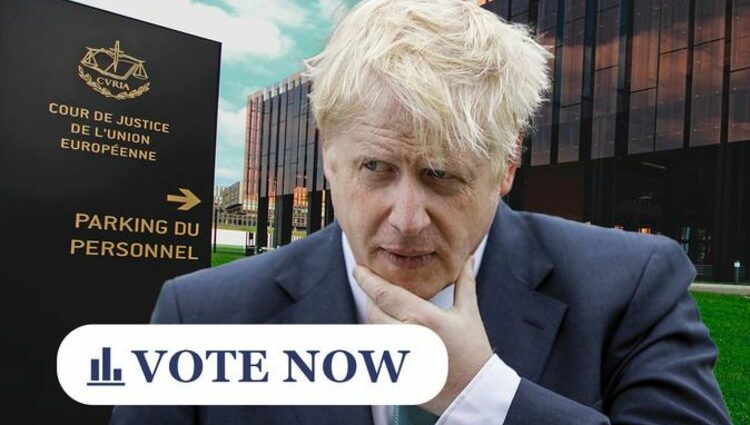 On Tuesday night in Lisbon, Lord Frost told EU ministers: “It is our [UK] responsibility to safeguard peace and prosperity in Northern Ireland, and that may include using Article 16 if necessary.” Triggering Article 16 would suspend part of the Brexit deal and can only be used if either the EU or UK concludes that the operation of the deal is leading to serious economic, societal or environmental problems.

Under the Brexit deal, UK imports to Northern Ireland must be rigorously checked in order to maintain a soft border between the nation and the EU territory of Ireland, which allows free flow of trade to continue in the EU’s Single Market.

But the bureaucracy of these checks has left Northern Ireland experiencing major shortages, and the UK Government argues this disruption to the economic welfare of the Northern Irish people justifies triggering Article 16.

Lord Frost also believes that the EU’s refusal to remove ECJ powers from Northern Ireland could lead to serious societal issues and may warrant triggering the so-called nuclear option.

Britain has demanded that the EU back off and allow the UK to govern the court system of Northern Ireland independently.

Lord Frost said: “The role of the European Court of Justice and the EU institutions in Northern Ireland create a situation where there appears to be no discretion about how provisions in the Protocol are implemented.”

He added: “The EU can make laws which apply in Northern Ireland without any kind of democratic scrutiny or discussion.

“Even now, as the EU considers possible solutions, there is an air of it saying ‘we have decided what’s best for you, and will now implement it.’”

The European Commission is set to reveal its proposal to resolve the dispute this afternoon.

It is expected that the proposal will allow goods to flow from the UK to Northern Ireland much more easily by reducing paperwork and checks, particularly for food products and plants.

However, EU diplomats have warned that Britain’s demand to remove the role of European judges from Northern Ireland is a red line they will not cross, and that the demand could cost Northern Ireland its access to the European Single Market.

Do you think it would be wise for Lord Frost to trigger Article 16 if the EU refuses to back down over the ECJ? Vote now.

Stay up to date with Brexit, the SNP and news from Number 10 by signing up for the free politics newsletter here: /newsletter-preference-centre