BBC Europe editor Katya Adler claimed EU diplomats believe Boris Johnson is accusing Brussels of threatening the UK and jeopardising peace in Northern Ireland in a bid to persuade the Conservative Party that reaching a deal in the autumn is the best option. Founder of ExplainTrade Dmitry Grozoubinski responded to the comments and said: “This is why I hold out hope for a deal.

“If Boris Johnson moves the UKs red lines enough to give the EU legal comfort (which he has room to do), no one in Brussels will care if domestically he (once again) paints a concession as his personal heroic triumph and EU capitulation.”

This comes as the Prime Minister is attempting to push through controversial legislation, which could override parts of the Brexit deal he reached with Brussels last October.

A number of Conservative MPs are unhappy that the UK Internal Market Bill could break international law by flouting the Withdrawal Agreement. 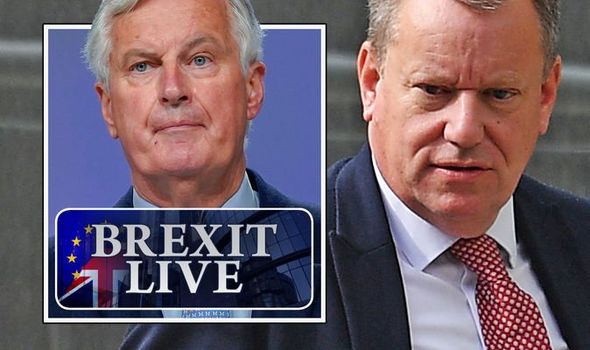 The Conservative and Labour grandees wrote in The Sunday Times: “It puts the Good Friday Agreement at risk, because it negates the predictability, political stability and legal clarity that are integral to the delicate balance between the north and south of Ireland that is at the core of the peace process.

“This has wide-ranging ramifications. It will not only make negotiation with the EU more difficult, but also any trade negotiations with other nations, including the United States. Once trust is undermined, distrust becomes prevalent.

“We both opposed Brexit. We both accept it is now happening. But this way of negotiating, with reason cast aside in pursuit of ideology and cavalier bombast posing as serious diplomacy, is irresponsible, wrong in principle and dangerous in practice.

“It raises questions that go far beyond the impact on Ireland, the peace process and negotiations for a trade deal – crucial though they are. It questions the very integrity of our nation.”

7.45am update: Labour will back PM’s Brexit plan if ‘substantial concerns’ addressed

Writing in the Sunday Telegraph, the Labour leader said: “Labour is prepared to play its part in making that happen.

“If the Government fixes the substantial cross-party concerns that have been raised about the Internal Market Bill, then we are prepared to back it.

“But if they do not, and the talk collapse, then it is their failure and incompetence that will have let the British people down.”

But huge changes are understood to be necessary to win Labour’s support for the controversial legislation, which could override the Withdrawal Agreement the Prime Minister struck with the EU last October.

Could Covid-19 be considered a preexisting condition? It's complicated.