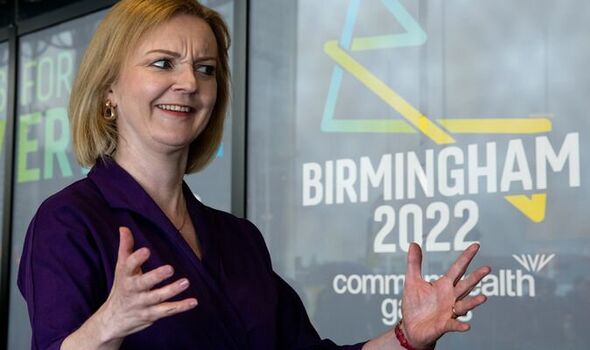 The Foreign Secretary and Tory leadership frontrunner is to propose a new “Commonwealth Deal” to boost trade and strengthen economic security between the 56 nations in the international association headed by the Queen. She also wants the “freedom-loving” countries that form the association to act as a global counter to the growing influence of communist-run China on the world stage.

Her latest policy plans are being unveiled to coincide with the opening of the Birmingham 2022 Commonwealth Games today.

Ms Truss said: “I will ensure the Commonwealth sits at the heart of my plans for Global Britain.

“As one of the largest groups of freedom-loving democracies, we must ensure there are clear benefits to remaining a member of the Commonwealth and offer nations a clear alternative to growing malign influence from Beijing.

“Prioritising trade with countries across the Commonwealth will strengthen economic and security ties whilst also turbocharging opportunities for British businesses to access one of the world’s largest economic blocs.”

Ms Truss’s blueprint for a Commonwealth Deal is the latest in a string of policy announcements designed to show she is a prime minister-in-waiting as she competes with Rishi Sunak to become Boris Johnson’s successor.

Tory grassroots members will begin choosing between the pair in a secret ballot from next week, with the final result due to be announced on September 5.

Ms Truss’s planned new Commonwealth Deal is designed to accelerate the Government’s push for bilateral trade agreements with members of the association.

By reducing trade barriers and restrictions, the Foreign Secretary hopes to “supercharge” the trade cost advantage that Commonwealth brings to members compared with countries outside the bloc.

If she becomes prime minister, she will order her trade ministers to draw up a new “Commonwealth trade template” to provide a model for new trade deals between the UK and other member states.

Commonwealth countries would be invited to discuss potential new trade deals in the early stages of her premiership.

Once discussions progress past initial stages, she aims for countries to have access to a fast-track process to establish tailored, bilateral agreements.

Ms Truss is understood to believe the Commonwealth – which is the largest group of nations that does not contain either China or Russia – has an increasingly important people to play in global politics.

The association has growing influence on the world stage, with a third of the global population now living in member nations, a collective GDP of £12 trillion (c14 percent of global GDP) and around 30 percent of the votes in the United Nations.

Sixty per cent of the Commonwealth’s 2.5billion-strong population is under the age of 30.

Ms Truss sees her Commonwealth vision as building on her work at the Foreign, Commonwealth and Development Office.

She launched British International Investment, a revamped development finance institution that is investing £8 billion by 2025 in developing countries across Africa, Asia and the Caribbean.

She has prioritised this investment across Commonwealth countries to ensure nations have a clear alternative to strings-attached finance from authoritarian states such as China.

Ms Truss is particularly concerned about China’s “Belt and Road Initiative”, a drive by the communist regime to invest in infrastructure projects and trade links in developing countries across Asia and Africa.

A spokeswoman for the candidate’s leadership campaign said: “Liz believes the Commonwealth is vital to countering the influence of China and other authoritarian regimes seeking to undermine democratic values and freedom.

“She believes trade and investment has a key role to play in stopping the growing Chinese influence where Beijing has used investment as a part of its ‘Belt and Road Initiative’. “

As Prime Minister she will maximise all opportunities to strengthen economic and security ties across the Commonwealth.”

During leadership debates, Mr Truss and Mr Sunak have clashed repeatedly over which candidate has the strongest record of standing up to China.

At the weekend, the former chancellor announced a major crackdown on the Chinese government’s influence in the UK.

He vowed to shut down Confucius Institutes, cultural organisations in a string of universities seen as closely linked to Beijing, and deploy the intelligence services to help root out Chinese communist infiltration into UK businesses.

But Ms Truss’s team claimed Mr Sunak had been “soft” on China at the Treasury.

In her previous job as International Trade Secretary, Liz Truss kicked off negotiations for dozens of new trade deals following the UK’s exit from the EU.

She opened talks with the governments of Australia, Canada and New Zealand, all Commonwealth members, in the quest for near-zero tariff trade agreements.

While the Commonwealth accounted for 9.1 percent of the UK’s total trade in 2019, many trade experts believe there is significant potential for increasing the figure by reducing tariffs and other barriers.

At present, UK trade with the Commonwealth is heavily concentrated on a small number of countries.

India, Canada, Australia, Singapore and South Africa accounted for 69 percent of the UK’s total trade with the Commonwealth in 2019.

Another 44 countries accounted for the remaining 31 percent including a string of fast-growing economies in Africa.