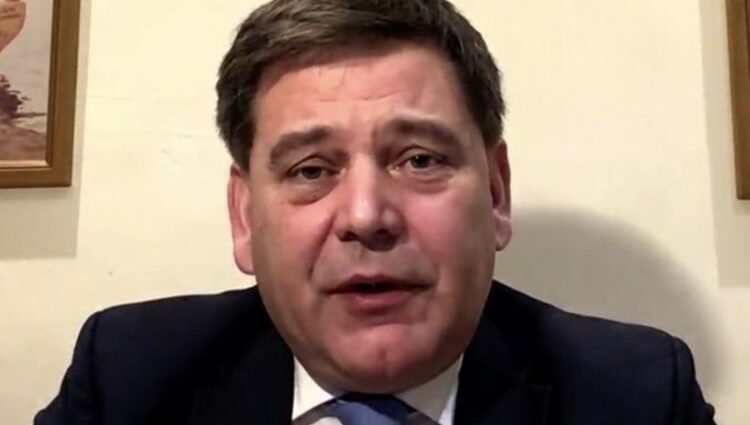 Andrew Bridgen has hinted that yet more revelations and bombshells will come out surrounding the Downing Street party-gate scandals. Mr Bridgen was the fifth Tory MP to publicly call for Boris Johnson’s resignation and declare they have written to the chairman of the 1922 Committee to say they have no confidence in the Prime Minister. In total 13 parties held on Government premises while Covid restrictions were in place – most in Downing Street – have been disclosed.

However, new reports in the Mirror have alleged that events in No 10 became so regular during COVID lockdowns that they were dubbed “wine-time Fridays” and staff bought a drinks fridge to store their alcohol.

The Mirror claims that Boris Johnson attended a “handful” of the events at a time when indoor socialising was banned.

Mr Bridgen told BBC Breakfast: “The problem is that I think these revelations are going to continue to run.

“It makes it impossible for Boris Johnson to function as PM, and it is actually stopping the Government functioning.”

JUST IN: ‘Frost never did this’ Truss deploys ace up sleeve

He continued: “What is he going to do? Will he be out every Wednesday apologising for the latest revelations?

“If there is another emergency where he has to call on the country to make sacrifices, he doesn’t have that authority. That makes his position completely untenable

“I don’t need to see what Sue Gray says to see that Boris has lost the moral authority to lead the country.”

The Tory MP added: “What it looks like to me is that Boris Johnson and his inner circle can do what they want and the rest of us have to do what we are told.

Boris Johnson ‘impersonators’ gather outside No 10

“It’s not one isolated incident. We are seeing continued revelations coming out about what has been going on at No 10 and it is a pattern of behaviour.

“The buck stops with Boris Johnson.”

On Friday night, a poll released by Savanta Comres gave Labour a 10-point lead, on 42 points against 32 for the Conservatives.

Mr Johnson has not appeared in public since PMQs on Wednesday when he apologised for attending a “bring your own booze” gathering on 20 May 2020.

Since then, it was reported that two more staff parties took place in No10 on April 16 – the night before Prince Philip’s funeral.

Downing Street apologised to Buckingham Palace on Friday for the insensitive events.

The behaviour of No10 staff has been contrasted with pictures of the Queen sitting alone at the Duke of Edinburgh’s funeral, due to Covid restrictions.