One of them passed.

While Mr. Biden did not deliver a stellar performance on Tuesday — and the mud-spattered spectacle in Cleveland left neither participant unsullied — he easily surpassed the low expectations set for him by a Trump campaign that had portrayed him as a doddering weakling incapable of facing an alpha president.

Mr. Biden arguably had more to lose going in: He was shaky in some primary debates and has kept a light public schedule and a relatively low profile since securing the Democratic nomination, in part to allow his opponent, who craves the spotlight, to roast in it alone.

But the former vice president, who turns 78 in November, stood comfortably at the lectern for 90 minutes — a capacity Trump aides had questioned leading up to the debate. And while he was often overshadowed and outshouted, he largely executed his main goal of presenting a stable contrast to the man beside him, despite a few flustered word fumbles and angry outbursts in which he called the heckling president a “clown” and a “fool.”

At no point did Mr. Biden match the portrait his enemies had painted of him as disoriented, demented, drugged or unable to cogently answer any of the policy questions put to him, even as Mr. Trump blared into his right ear like a boombox with a busted volume knob. It was noteworthy that Trump stalwarts like Sean Hannity of Fox News, who have loudly questioned Mr. Biden’s mental acuity, mostly avoided the topic in post-debate wrap-ups.

“Biden was really, really well prepared — it was clear that he anticipated Trump’s interruptions, and settled on a strategy of focusing on the camera or Chris Wallace rather than staring back at him,” said Alex Conant, a veteran Republican strategist who helped prepare Senator Marco Rubio of Florida for his debates against Mr. Trump during the 2016 Republican primaries.

“Look, if Trump had been able to wipe the floor with him, the whole narrative today wouldn’t be about a chaotic debate, or about Trump’s performance, it would be about Biden not standing up to Trump — and the media would be asking if Biden is too old for the job,” Mr. Conant said. “But Biden did not let that happen.”

Mr. Trump’s campaign manager, Bill Stepien, saw their clash in very different terms, saying in a statement after the debate that Mr. Biden “was revealed as too weak to be president and spent most of the evening on his heels.”

But that opinion was not widely shared, even among Mr. Trump’s stalwart supporters, including Chris Christie, the former governor of New Jersey, who served on his debate prep team. On Tuesday night, Mr. Christie conceded that the president’s approach had been “too hot” and suggested that Mr. Trump needed to tone it down next time.

And instant polls taken in the debate’s aftermath, while not always an accurate gauge of public opinion, swung in Mr. Biden’s direction.

In contrast to Mr. Trump’s improvisational approach — with a minimum of practice time — Mr. Biden relied on a team of Clinton and Obama administration veterans that included his longtime aide Ron Klain, who is known for fastidiously compiling game-plan binders with various debate scenarios. 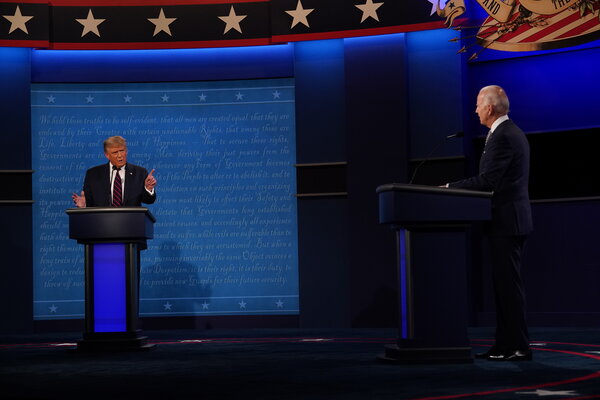 A key focus for the Biden team in the final week, at a time when Mr. Trump was ridiculing the former vice president for dodging public events, was drilling Mr. Biden repeatedly on anticipated attacks against his son Hunter, who has come under fire for taking a lucrative board position with a Ukrainian natural gas company.

It is a subject that enrages Mr. Biden, and he has repeatedly snapped at aides who have approached him with questions about his son’s conduct. At a campaign stop last year, he angrily lashed out at a voter who questioned him about his son’s overseas business dealings, calling the man a “damn liar.” The Biden team’s goal was to get him to the point where he could forcefully push back on the president without losing his cool, they said.

When Mr. Trump interrupted Mr. Biden to say that Hunter Biden had been “thrown out of the military” because of cocaine use, Mr. Biden appeared prepared and relatively calm, if somewhat shaken.

“My son, like a lot of people, had a drug problem,” he said, turning to the camera. “He’s overtaken it. He’s fixed it. He worked on it. I’m proud of him.”

There were times, however, when the preparation eluded Mr. Biden, and Mr. Trump seemed to get under his skin, as his barrage of disruptions and insults were intended to do. Mr. Biden, who overcame a childhood stutter to become a self-assured debater in the Senate, seemed at a momentary loss for words when Mr. Trump attacked his family and questioned his positions on law enforcement.

But more often, Mr. Biden, who has a volatile temper — and was known as a long-winded civic sermonizer during his Senate years — visibly struggled to suppress his anger.

It did not always work — and it did not always work against him. His offhand remark “will you just shut up, man?” went viral and was quickly incorporated into his campaign’s branded merchandising operation, even as some detractors viewed his remarks as showing disregard for the office of the president.

Frank Luntz, a Republican pollster who conducted a focus group of undecided voters during the debate, said Mr. Biden’s counterattacks went over the line, and alienated some of the people Mr. Luntz interviewed. “He did the same thing as Trump, just not as badly or as brutally,” he said in an interview. “The loudest voice is sometimes silence. That would have been a much better approach.”

One of the few politically coherent lines of attack pursued by Mr. Trump, 74, was to accuse Mr. Biden of being a Trojan horse for radical leftists — figuring he would either have to hug progressives and therefore alienate moderates, or distance himself, risking a revolt on the left.

The centrist former vice president chose to emphatically distance himself from his party’s progressive wing and threw in a low-key “l’etat, c’est moi” declaration. When the president accused him, falsely, of supporting “socialist” health care proposals, Mr. Biden responded: “The party is me. Right now, I am the Democratic Party,” adding, “The platform of the Democratic Party is what I, in fact, approved of.”

At another point, when Mr. Trump claimed that Mr. Biden “agreed with Bernie Sanders, who is far left,” Mr. Biden batted the remark aside like a bug. “The fact of the matter is: I beat Bernie Sanders,” he said. The president tried to seize on the moment, insisting, “You just lost the left.”

Mr. Sanders was having none of it on Wednesday. “What Joe Biden said was right. He does not agree with me,” he said on ABC’s “The View.” “I wish he did, but he does not.”

The senator added, “It is terribly important that we defeat Trump, that we elect Biden and that we have the largest voter turnout in the history of the country.” And as if to put the matter to bed, he said he planned to hit the campaign trail for the former vice president “in a very short time.”

Mr. Biden’s team was cautiously optimistic about the impact of the debate on undecided voters, but also wanted to avoid a repeat of Tuesday night’s chaotic brawl, which might impact Mr. Biden’s brand as a conciliatory national healer who can bring the country back together.

On Wednesday morning, both the candidate and his campaign were pressuring the Commission on Presidential Debates to restrain Mr. Trump’s disruptions, perhaps by silencing his microphone when he was not entitled to speak. By midday, the commission announced that such measures were under consideration ahead of the next debate, scheduled for Oct. 15 in Miami.

“This next debate is going to be in front of real, live people, it’s going to be a town hall,” Mr. Biden told reporters during a campaign stop in Ohio on Wednesday. “I hope we’re able to get a chance to actually answer the questions that are asked by the persons in the room. But God only knows what he’ll do.”

President Trump scrambled to defend himself by falsely claiming that he had “always denounced any form” of white supremacy. Read the latest updates.