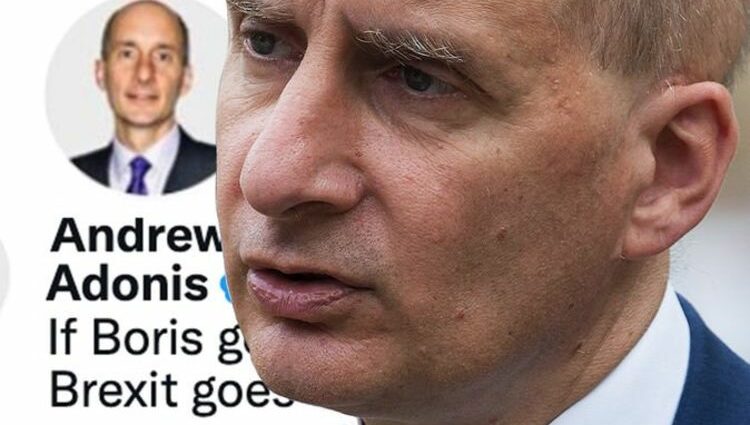 The Labour peer took to Twitter after the Prime Minister apologised for attending a “bring your own booze” event in the garden of Downing Street during lockdown. Lord Adonis, who is campaigning for the UK to rejoin the EU, gleefully said: “If Boris goes, Brexit goes.”

However the arch-Europhile’s tweet backfired, with Twitter users insisting Brexit is a reason for the embattled Prime Minister to stay.

One person with the handle @StrideEddie commented: “And that’s just ONE reason why Boris Johnson MUST hang on.”

Another, @Gin_Not_Sling, wrote: “This is one reason not to drop Boris Johnson.”

A third Twitter user, @Nikhm3, replied: “This is the best advert for Boris Johnson to stay. Thanks @Andrew_Adonis.”

Another person, @ruairidh_kerr, said: “Not true in the slightest but this fantasy has driven much of the Boris bashing since he became PM.”

A fifth, @BlackKbl, added: “And there we have it – the genuine purpose of the relentless campaign against the PM.”

And the Bruges Group think tank said: “Then Boris stays. Simple as that.”

Another person with the handle @kevinadiamond wrote: “It’s not over but a softer Brexit becomes more possible.”

DON’T MISS
What happens if Boris Johnson resigns? Next steps as PM struggles [ANALYSIS]
Boris on brink as senior 1922 Committee Tory twists knife [INSIGHT]
‘Boris has just wiped out his own party’ Calls for PM to resign [POLL]

The Commons was packed in anticipation of his first public response to the leaked email about the May 20 2020 event encouraging staff to “bring your own booze”, which No 10 said he was not sent.

The Prime Minister insisted to MPs that he thought the May 20 2020 outdoor gathering had been a “work event”.

Mr Johnson said he attended for around 25 minutes to “thank groups of staff” but “with hindsight I should have sent everyone back inside”.

The Prime Minister acknowledged public anger, saying: “I know the rage they feel with me and with the Government I lead when they think in Downing Street itself the rules are not being properly followed by the people who make the rules.”

He said an inquiry was examining the situation but admitted “there were things we simply did not get right and I must take responsibility”.