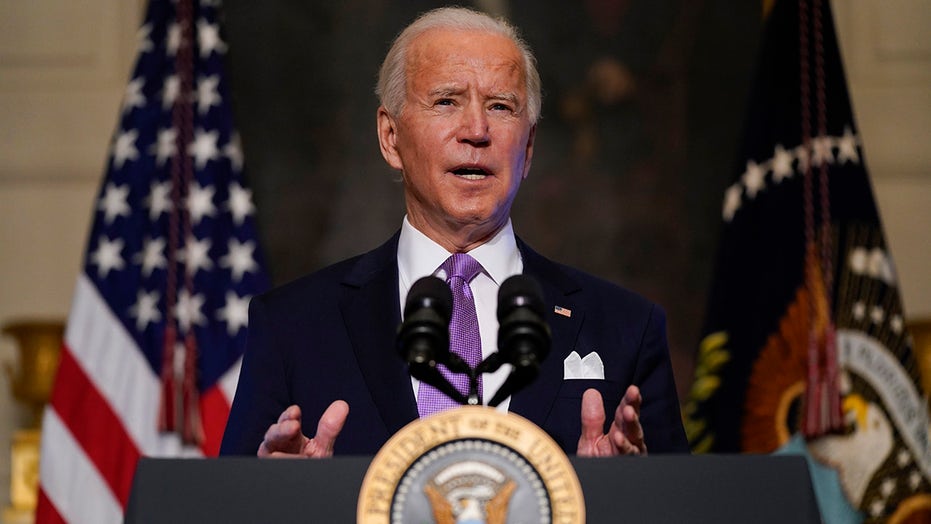 Fracking advocates are fighting mad at President Biden’s new executive orders aimed at curbing oil and gas drilling, with some believing the new measures effectively break his promise not to ban fracking.

Biden on Wednesday signed an order to pause oil and gas leases on federal land, and the White House announced it would begin a “rigorous review” of all existing fossil fuel leases and permitting practices.

“Let me be clear, and I know this always comes up. We’re not going to ban fracking,” Biden said signing the order. It was a promise he’d peddled in swing states like Pennsylvania and Ohio that led him to victory.

Some critics aren’t buying it.

“It is a de facto ban on fracking,” Sen. John Barrasso, R-Wyo., told Fox News in an interview about the new order, noting that his state stands to lose 30,000 jobs.

Sommers agreed that the combination of Wednesday’s order issuing a moratorium on new oil and gas leases on federal land combined with last week’s order from the Interior Department to freeze leases to drill for 60 days amounted to a “de facto fracking ban.”

Banning fracking outright, as environmentalists have called for, would take an act of Congress and be subject to various lawsuits.

Others say that the Biden orders will do little to hurt the fracking industry since many big oil and gas producers already have existing leases they haven’t drilled on.

“The industry hasn’t yet drilled on more than half of that land. In other words, the industry has enough untapped federal land and ocean acreage right now to cover two-thirds of South Carolina. That’s enough, industry executives have said, to keep the industry busy for years.”

“After years of giving away public resources at firesale prices, industry analysts have made clear that the industry stockpile of leases and permits is more than they could ever hope to use in current market conditions. Claims to the contrary are just not credible,” Huntley said in a statement to Fox News.

Last month, 25 Republican senators introduced a bill to prohibit Biden from blocking energy permitting and leasing without congressional approval. Barrasso was among the senators co-sponsoring the bill.

“President Biden said he was going to unite the country, but he’s done one divisive thing after another. Since he left giving the inaugural address he drove down Pennsylvania Avenue pulled into White House, he threw all the unity talk out the window, basically pulled up his presidential pen and drew a big target on the back of American energy,” Barrasso said.

Last week’s 60-day pause stripped Interior Department agencies and bureaus of their authority to issue drilling leases or permits while the administration reviews the implications of the federal minerals leasing program, according to a Department of Interior memo.

BIDEN TO BAN NEW PERMITS FOR DRILLING ON FEDERAL LANDS, WATERS FOR ONE YEAR

Biden only has the authority to halt leases on federal land. About 22 percent of American oil is drilled from federal land and waters and about 14 percent of natural gas, according to API, which represents the oil industry. Drilling on federal land generated almost $6 billion in government revenue last year.

Energy companies stocked up on these leases anticipating a potential Trump loss, meaning they could continue to develop as long as they had a permit to drill for oil and gas.

“What a lot of my member companies did at API is, when there was a lease sale under the Trump administration, they purchased a bunch of leases anticipating Biden would follow through on his campaign promises and limit the number of new leases on fed lands and water,” Sommers said.

Sommers said the question would be whether they could get permits to drill on the land they’d leased. “They do have a bank of leases, they can continue to develop if they can get a permit to drill. That’s the big if.”

“What we’re anticipating is a significant slowdown in the permitting process through the Bureau of Land Management,” he said.

The Interior Department issued a statement saying that existing leases “are continuing to be reviewed and approved.”

“While we welcomed a lot of what the administration is trying to do and are anxious to work in partnership, this is an area where we don’t support,” Marty Durbin, Senior Vice President of Policy at the U.S. Chamber of Commerce told Fox News.

“It’s one thing to say we wanna do some additional reviews from an environmental standpoint, you don’t have to halt new leases to do that.”

The Biden administration has issued 31 new drilling permits on federal lands and waters since taking office, despite recent orders.

But companies could eventually have to grapple with a federal government refusing to renew leases on land they haven’t yet drilled, in some cases within about two years.

The White House did not respond to a request for comment.