The ninth round of formal negotiations in Brussels ended with both sides edging towards an agreement after months of bitter deadlock. Lord Frost, the Prime Minister’s Brexit envoy, will hold one final session with EU counterpart Michel Bernier before heading back to London to brief ministers on the progress. Their discussion will pave the way for a high-level political intervention to establish whether an agreement can be reached on the most contentious sticking points – fisheries and state aid.

Mr Johnson will tomorrow use a call with the European Commission President tomorrow “take stock” of their negotiators’ work, Downing Street has announced.

A No 10 spokesman said: “The PM will be speaking to President von der Leyen tomorrow afternoon to take stock of negotiations and discuss the next steps.”

It will be the first time the Prime Minister has held talks with Mrs von der Leyen since June.

The Commission chief will debrief EU leaders on the Brexit talks today at a Brussels summit.

This week’s round of trade negotiations was the last of the scheduled sessions ahead of a summit of European Union leaders on October 15 – the deadline set by the Prime Minister to secure an agreement. 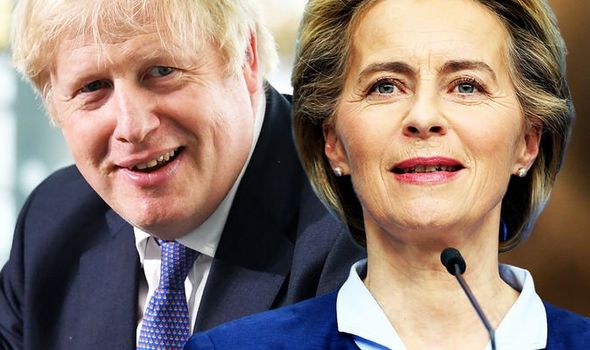 The discussions have been described as “constructive” by Mr Johnson’s aides.

His spokesman said: “They have been conducted in a constructive spirit and we certainly are committed to continuing to work constructively this week to reach an agreement with the EU.”

But Brussels sources attempted to play down progress, claiming there is still a long way to go before a trade deal can be reached.

Both sides could announce further sessions in the build-up to the crunch European Council summit in the hope of having a “deal in principle” ready to present to heads of state and governments.

The move comes just a day after Mrs von der Leyen announced she had triggered the first steps in an infringement procedure against the UK for plans to tear up parts of the Brexit divorce deal.

The Brussels chief gave Mr Johnson just a month to scrap contentious sections of his Internal Market Bill or risk being hauled before the European Court of Justice.

But Downing Street insisted the proposed new legislation, which would prevent Brussels from carving up the UK if future relationship talks collapse, is a “safety net”.

A Government spokesman said: “We have clearly set out our reasons for introducing the measures related to the Northern Ireland protocol.

“We need to create a legal safety net to protect the integrity of the UK’s internal market, ensure ministers can always deliver on their obligations to Northern Ireland, and protect the gains from the peace process.”

The Prime Minister wants to ensure the EU cannot block food exports to Northern Ireland from the rest of the UK if a trade deal is not reached.

Mrs von der Leyen said: “We had invited our British friends to remove the problematic parts of their draft Internal Market Bill by the end of September.

“This draft Bill is by its nature a breach of the obligation of good faith laid down in the Withdrawal Agreement. Moreover, if it is adopted as it is, it will be in full contradiction to the protocol on Ireland/Northern Ireland.

“The deadline lapsed on Wednesday. The problematic provisions have not been removed. Therefore this morning the Commission has decided to send a letter of formal notice to the UK Government – this is the first step in an infringement procedure.”