Audrey Young: Lifting the lid on how the parliamentary Press Gallery works 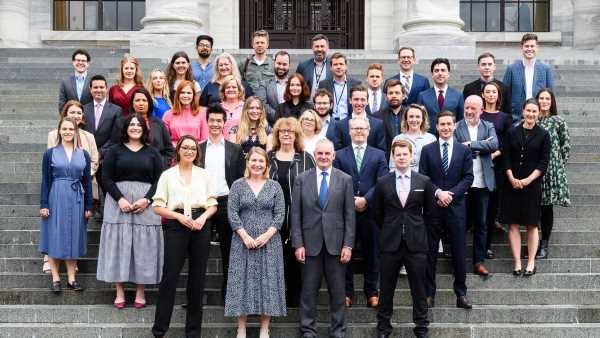 The Parliamentary Press Gallery is marking its 150th anniversary this week – a year late because of Covid-19. Audrey Young hasn’t been there quite that long but as one of the most experienced members of the Press Gallery, she explains the work of the gallery, whether anything is really “off the record” and how close journalists get to politicians.

Like the ad for the Police said a few years ago, political journalists have great work stories. And like them, the best days for us are often the worst days for someone else. It may be a blunder by a minister, an embarrassing leak, a national emergency, a pratfall by a backbencher, conferences, campaigns, or on a really big day, a scandal, a resignation or a leadership coup.

What has been the most exciting leadership coup?

I’ve missed a lot of them through sheer coincidence. It used to be said that leaders would get nervous when I went overseas on holiday. Paula Bennett drafted a mock bill, the Holidays (Audrey Young Prohibition) Amendment Bill. The result of the Don Brash vote against Bill English was probably the biggest surprise. Resignations are more stunning. Nothing has matched the day John Key stepped down as Prime Minister for shock value. Jim Anderton’s decision to resign as Alliance leader after one of his daughter’s took her life was big event at the time, although he later returned to the leadership.

Where does the gallery get its stories from?

A myriad of places. The best ones are from confidential sources that the competition can’t get to but is forced to match the story. But stories can be from numerous other places: tip-offs from MPs, press secretaries or readers, a hunch that you’ve followed up, Official Information Act releases, a leaked document, the House, select committee evidence, press releases, press conferences, interviews, reports, social media, a new angle on a running story or a request from the editor. A source once left a confidential Cabinet paper for me in an agreed place at an agreed time in the old Bennett’s Bookshop in Bowen House. Several decades ago, a gallery journalist was caught during a Press Gallery party, the worse for wear, in another office rifling through a rival’s desk. But mostly it is above board.

Do journalists go through rubbish bins to get stories?

No, not deliberately anyway. One former Press Gallery member, Roger Foley, left an important file of papers his near a rubbish tin. When he realised the cleaners had put the file into the rubbish, he got a security guard to take him to the rubbish collection point to start combing through the big bin. He says he recognised the Press Gallery’s rubbish because of the chicken bones and champagne bottles. He never found his own file but he did find something from a Labour MP which later formed the basis of a story. The same reporter was accused of crawling through a ceiling at Parliament to hear a Muldoon National caucus meeting, which is not true. But he did climb on a coat stand to poke his head into a ceiling manhole and could hear a row upstairs about NZ investing in a cool-store in Bahrain, which gave him a front-page lead.

How has the Press Gallery changed?

It depends what the starting point is. Former parliamentary historian John Martin relays the disturbing story of former Prime Minister Gordon Coates (1925–28) holding press conferences in his office with a whisky and water in hand. Worse, when he needed to relieve himself, the press conference continued in the nearby lavatories. Women were not allowed to become proper members of the Press Gallery until 1965. Most media offices today are run by women. There is a creche nearby.

Some politicians go through their careers ignoring the media but not many successful ones.New MPs are sometimes warned during their induction that nothing is “off the record” when it comes to journalists, which is quite untrue. But it might take time for MPs to work out who they can trust. But a trusting relationship can be mutually beneficial. Talking to an MP with extensive knowledge of an area but who doesn’t want to be quoted can add depth to a journalist’s and the public’s understanding of the story. But everything an MP says cannot necessarily be taken at face value, either. If journalists’ public had to rely solely on press statements, it would be an ignorant world. That said, many politicians pay a great deal of attention to their own social media images and messaging, including Jacinda Ardern.

Is there much social fraternisation?

There is no point denying it, considering RNZ journo Clare de Lore married Don McKinnon, and Ruia Mai journo Ngahuia Wade married Richard Prebble. There are many opportunities to socialise between journalists and MPs, with various social events hosted regularly at Parliament and the parliamentary bar, Pickwicks, still being a popular haunt for younger reporters who miss the company of Winston Peters. But the culture is not what it was. There are no longer all-night sittings of Parliament with well-lubricated card schools playing into the night that could end up anywhere. The “work hard, play hard” culture has changed over the years and more markedly under Speaker Trevor Mallard who, by the way, is married to Listener columnist Jane Clifton.

Occasionally, such as last week when we got together before the press conference for Australian Foreign Minister Marise Payne because the people running her visit set a limit of five questions only for New Zealand media. We had to agree on what the five issues would be and who would ask the questions. It is a collegial but competitive work environment. If someone gets a big scoop, they will be congratulated by competitors. But we are arch rivals. You can’t just ask any question in a standup without giving away a story you’re working on. Sometimes it is better to work by phone than be seen in the café with a source. Rivals such as the Dominion and the Herald used to share offices. We now work in neighbouring offices to our rivals. People get nervous when someone else’s door is shut in the gallery because it usually means they are working on a sensitive story.

Are overseas trips a perk of the job?

They never feel like it at the time. Covering a Prime Minister abroad can be extremely demanding with different time zones, a packed schedule and sometimes the need to file print stories and commentary, audio, photos and video. But they are almost character-building in hindsight.

What are the more memorable ones?

My first trip in the gallery was with Jim Bolger to the Pacific Islands Forum in the Marshall Islands. It was an ethical torment.Literally outside our hotel window the locals were roasting giant turtles alive in honour of the special guests. The United Nations and White House visits are a thrill. But in Helen Clark’s last visit, George W Bush complimented Duncan Garner on his smart suit instead of answering his question. You can get to see places you’d otherwise never visit: Mururoa, East Timor, Port of Spain, Naypyidaw and Baghdad, flying low across the city with Gerry Brownlee in an open-door chopper with a machine gunner at the ready. My colleague Claire Trevett covered John Key’s visit to Balmoral Castle in Scotland in 2011 and got the best picture of the Queen’s cluttered room.

Why is it called the Press Gallery?

It was literally only the “press” as in newspapers and there is still literally a gallery above the Speaker’s chair set aside for accredited members of the Press Gallery to watch the debating chamber. There is a lovely old wooden bench to write on. It was an historic and treasured bench, inscribed with dozens of signatures carved out it from generations of journalists. But during the 1990s when the Old Parliament Buildings was vacated for an upgrade, Parliamentary Service had the bench sanded smooth without any consultation. The media offices used to be in a corridor behind the gallery. MPs took those offices when the refurbishment was over and they have never been returned.

How do you become accredited?

It is on the recommendation of the Press Gallery using a set of rules, but it is ultimately up to the Speaker, who controls virtually everything to do with Parliament including where you can and cant take photos or film people in the building. MPs need to be able to carry out their jobs unimpeded. The Speaker sometimes punishes journalists for breaches, such as taking away swipe card access as happened to entire Herald office for 10 days when it ran a photo of people in the public gallery trying to stop a man from jumping over into the chamber.

When I first started in 1994, we were using electric typewriters with golf balls and we would fax our stories up to the office in Auckland. You could file a story as late as 10.20pm if it was for the front page. These days, with websites running 24 hours a day, there is no such thing as a single deadline. The competition to be first is stronger than ever. The number of press conferences has increased hugely especially under Covid-19. Most are live-streamed. Reporters listen and file to the website at the same time. Photographers have become video operators. Reporters have to know how to take photos and video. The pace has quickened.

No, but we all want our stories to be well read and these days you know how well an online story has been read. But for the Herald, at least, the Premium content means you are encouraged to cover issues more deeply as well.

What are some of the other terms political reporters use?

The Bridge Run is when we pull politicians aside on their way to the debating chamber on the black and white tiles in Parliament’s foyer. It is called the Bridge Run because, inexplicably, it used to take place on the narrow bridge between Parliament and the Beehive until some safety conscious Speaker changed it. A Stake Out is when you spend hours outside an important meeting or a building waiting for an MP to say something. An Embargoed announcement is something that the news media has been given ahead of time in order to have more time to prepare it and publish it at the same time.

Do you take it easy when Parliament is in recess?