The race for Arizona governor is heating up.

Arizona Secretary of State Katie Hobbs, a Democrat, tossed her hat in the ring on Wednesday. Gov. Doug Ducey’s second term ends in 2023.

“The other side isn’t offering policies to make our lives better. They’re offering conspiracies that only make our lives worse. We did our job. They refuse to do theirs. … That’s why I’m running for governor,” Hobbs said in her launch video.

“In 2020, against all odds, in the middle of a pandemic, we proved that democracy works. It’s been my job and life’s work to make government work for the people of Arizona,” she said. 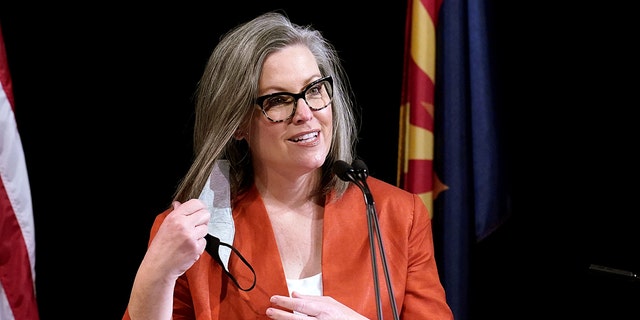 Arizona Secretary of State Katie Hobbs removes her face covering as she addresses the members of Arizona’s Electoral College prior to them casting their votes in Phoenix, Ariz., on Dec. 14, 2020.
(Ross D. Franklin/Pool via REUTERS)

The focus on Arizona’s 2020 presidential election results raised Hobbs’ profile as she appeared on cable news to take issue with state Republicans. The Arizona state Senate is in the middle of an audit of ballots in Maricopa County that Hobbs has criticized.

“We’ve got this state government being run by conspiracy theorists right now. They are out of touch with everyday Arizonans and that’s holding us back as a state,” she told the Arizona Republic.

Hobbs is a former state legislator, serving in the state House of Representatives from 2011 to 2013 and state Senate from 2013 to 2019, according to Ballotpedia.

A group called We the People AZ Alliance is organizing a recall effort against Hobbs that must gather 583,172 signatures by June 11, according to Ballotpedia.

Hobbs is not the only Democrat in the race. Former Nogales, Ariz., Mayor Marco Lopez is also running.

Arizona hasn’t had a Democratic governor since 2009. Ducey won reelection in 2018 by roughly 15 points.