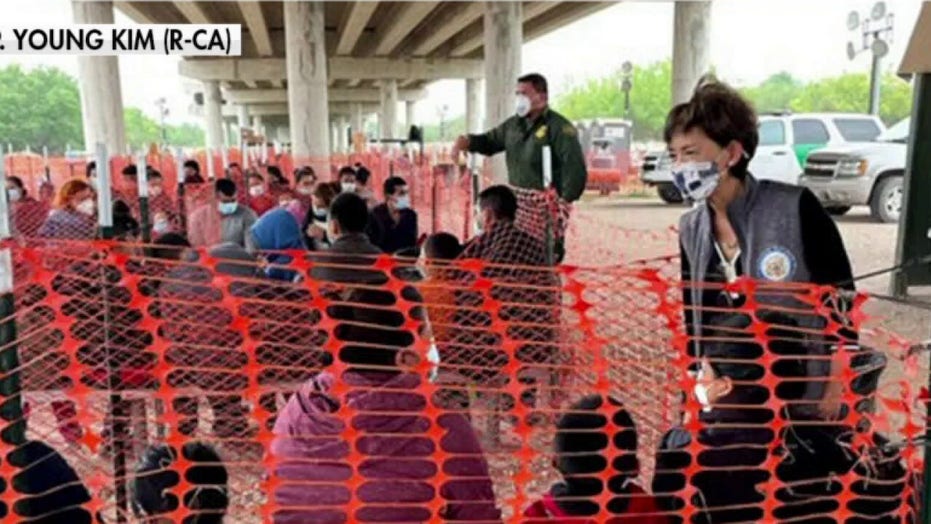 Rep. Young Kim tells Biden, Harris to ‘get your butts out there’ after visit to border

‘This Biden administration refuses to see it for what it is,’ GOP congresswoman tells ‘Fox & Friends Weekend’

Rep. Alexandria Ocasio-Cortez, D-N.Y., led a group of her House Democratic colleagues in a letter to federal immigration officials demanding an overhaul of immigration policies and objecting to gang members in the country illegally being targeted for deportation.

Ocasio-Cortez and 34 of her Democratic colleagues sent a letter to Department of Homeland Security (DHS) Secretary Alejandro Mayorkas and Immigration and Customs Enforcement (ICE) director Tae Johnson, calling on them to change immigration policies that rely on the US’s “discriminatory legal system.”

The lawmakers claim an interim enforcement memo issued by ICE “does not adequately protect the liberty interests of asylum seekers” and presumes an illegal migrant — including those convicted of aggravated felonies —to be a “border security and enforcement and removal priority.”

“This blanket presumption will effectively mean detaining an untold number of people who have fled persecution,” the lawmakers wrote.

Additionally, the letter claims the “definition of an aggravated felony” is a “relic of the racist War on Drugs” and that the “category has been interpreted to include many state drug misdemeanors.”

“‘Aggravated felonies’ as a category have been designed to ensure that people have as few rights as possible to fight detention and deportation,” Ocasio-Cortez and her colleagues wrote.

“Moreover, we are concerned that the memorandum only requires ICE officers have a ‘good faith belief’ that someone has an aggravated felony conviction even while acknowledging that such a determination is ‘a complex question,’” they continued.

The lawmakers also claimed the memo “invites racial profiling” by making a migrant who has been convicted of actively or intentionally participating in gang activity a “public safety enforcement and removal priority.”

They claimed that leaving ICE agents to determine whether someone has been convicted of being involved in gang activity or an aggravated felony “should not be left to an officer’s discretion or ‘good faith belief.’”

“It is well documented that law enforcement’s practices of labelling people as gang-involved is often faulty, based on arbitrary and racist factors, and not subject to due process,” the lawmakers claimed.

“We are in a moment of racial reckoning in this country, with communities across the country calling for an end to mass incarceration and racist policing,” the group continued. “It is time to end the carceral approach to immigration, which relies on these same flawed systems.”

DHS did not immediately respond to Fox News’ request for comment.