7 Republican Senators Explain Why They Voted To Convict Trump 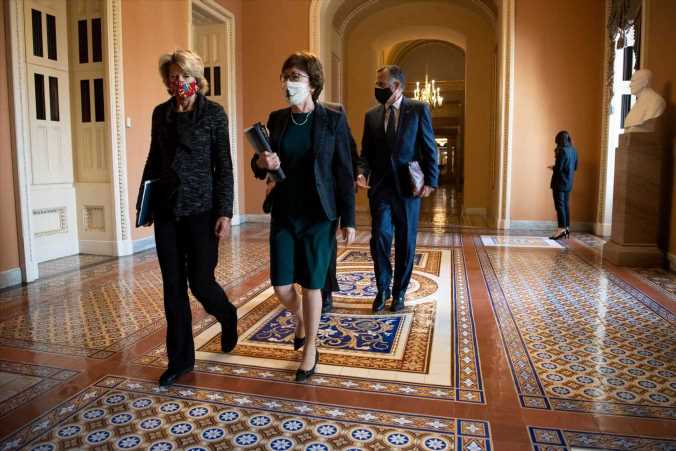 Seven Republican senators made ex-President Donald Trump’s second impeachment trial the most bipartisan in American history, even if their votes did not tip the scales enough to convict him. The final vote was 57 to 43, 10 votes short of the threshold needed to secure a conviction, with seven Republicans joining the Democrats.

Most Republicans followed Senate Minority Leader Mitch McConnell’s example, claiming the Senate did not have the constitutional authority to put a former president on trial ― though constitutional scholars have largely disagreed with that argument.

In any case, McConnell could have used his powers as majority leader to begin the trial while Trump was still in the White House. He chose not to.

Regardless, Democratic House impeachment managers made their best efforts to lay out historical precedent for trying a former official alongside all the ways Trump incited the Capitol insurrection by refusing to accept his electoral defeat. As a direct result of the violence, five people died, including a Capitol police officer, and more than 100 people were injured. World leaders expressed horror at the “attack on democracy.”

Here is why they voted the way they did.

The Louisiana senator offered a simple explanation in a video posted to Twitter.

“The Constitution in our country is more important than any one person. I voted to convict President Trump because he is guilty,” he said.

Cassidy had sharply criticized Trump’s defense team after their first day on the Senate floor, calling them “disorganized.”

He did not hint about which way he was leaning before the vote, however.

The senator from North Carolina had voted to dismiss Trump’s impeachment trial before it began.

“When this process started, I believed that it was unconstitutional to impeach a president who was no longer in office. I still believe that to be the case,” he said in a statement. “However, the Senate is an institution based on precedent, and given that the majority in the Senate voted to proceed with this trial, the question of constitutionality is now established precedent.”

Burr wrote that he believed his role to be that of “an impartial juror” and found during the presentations that “the facts are clear” ― Trump’s actions rose to “the level of high Crimes and Misdemeanors.”

“The President promoted unfounded conspiracy theories to cast doubt on the integrity of a free and fair election because he did not like the results,” he said. “As Congress met to certify the election results, the President directed his supporters to go to the Capitol and disrupt the lawful proceedings required by the Constitution. When the crowd became violent, the President used his office to first inflame the situation instead of immediately calling for an end to the assault.”

“By what he did and did not do, President Trump violated his oath of office to preserve, protect and defend the Constitution of the United States.”

The senator from Maine cited many of the arguments House impeachment managers presented during the trial in her reasoning for voting to convict.

“That attack was not a spontaneous outbreak of violence. Rather, it was a culmination of a steady stream of provocations by President Trump that were aimed at overturning the results of the presidential election,” Collins said on the Senate floor Saturday. “The president’s unprecedented efforts to discredit the election results did not begin on Jan. 6. Rather, he planted the seeds of doubt many weeks before votes were cast on Nov. 3.”

She continued: “President Trump’s falsehoods convinced a large number of Americans that he had won, and that they were being cheated.”

Collins also cited in her remarks Trump’s “incredible effort to pressure state election officials to change the results in their states,” specifically noting his call with Georgia’s secretary of state in early January. Trump, Collins said, oscillated “between lobbying, cajoling, intimidating and threatening” the officials.

Collins said that Trump ultimately created a dangerous situation, “whether by design or by virtue of a reckless disregard for the consequences of his action.”

The senator from Alaska is the only lawmaker among the seven who will have to face voters next year. But she told Politico on Saturday that she wasn’t thinking about her “political ambitions” when she cast her vote.

“If I can’t say what I believe that our president should stand for, then why should I ask Alaskans to stand with me?” Murkowski said. “This was consequential on many levels, but I cannot allow the significance of my vote to be devalued by whether or not I feel that this is helpful for my political ambitions.”

Murkowski said “extraordinary men and women” had stood up for democracy on the day of the riot ― something that Trump did not do. It was for these Americans that lawmakers returned to their chambers in the Capitol after the insurrection to certify the presidential election results, she said.

The senator from Utah ― who was seen running from rampaging rioters in footage of the attack that was unreleased until the impeachment trial ― said in a statement that he voted to convict because he believed Trump to be “guilty of the charge made by the House of Representatives.”

“President Trump attempted to corrupt the election by pressuring the Secretary of State of Georgia to falsify the election results in his state,” Romney said, adding that Trump also “incited the insurrection” and “violated his oath of office by failing to protect the Capitol” and those inside.

“Tribalism is a hell of a drug, but our oath to the Constitution means we’re constrained to the facts,” the senator from Nebraska said in a statement.

Sasse explained that three main points of argument won him over ― the first two being Trump’s lies about having won the election and the sheer violence of the Capitol attack.

“Third, Congress is a weaker institution than the Founders intended, and it is likely to shrivel still smaller. A lot of Republicans talk about restoring Congress’ power from an already over-aggressive executive branch. Conservatives regularly denounce executive overreach ― but we ought primarily to denounce legislative impotence,” Sasse said. “This trial is constitutional because the president abused his power while in office and the House of Representatives impeached him while he was still in office.”

The Pennsylvania senator said he voted to convict Trump because the former president betrayed the Constitution and his oath of office.

“I was one of the 74 million Americans who voted for President Trump, in part because of the many accomplishments of his administration,” Toomey said in a statement. “Unfortunately, his behavior after the election betrayed the confidence millions of us placed in him.”

Trump urged his supporters “to march on the Capitol for the explicit purpose of preventing” the formal certification of the electoral results ― despite the fact that he’d “legitimately lost” the election, Toomey said.

“As a result of President Trump’s actions, for the first time in American history, the transfer of presidential power was not peaceful,” he added.