Why Goldman Sachs sees a ‘baby bear market’ in bonds

Betting against bonds has not, to say the least, worked well for the last 40 years or so.

So the new Goldman Sachs call for a “baby bear market” in bonds is a noteworthy call of the day. The argument, laid out in the bank’s 10 market themes for 2020, is that the Federal Reserve is done cutting interest rates after three reductions this year.

The bank does admit that it will take a while for yields to rise. “We think the message from history is that bond yields will start rising when the market prices meaningful odds of rate increases, and that point still seems far off. Fed officials have signaled that they would like to be done with cutting but that the hurdle for hiking again is high. So, although we are cautiously optimistic on the global economy, we forecast only moderately higher 10-year Treasury yields next year, targeting a rebound to 2.25%, mostly skewed toward the second half of 2020,” the company says.

It expects emerging market equities generally, and cyclical stocks in both the U.S. and emerging markets, to rise a bit. “We expect moderately better economic and earnings growth, and therefore decent risky asset returns,” the research note says. “But we also see plenty of risks, and more challenging valuations, so the upside is limited.”

Trade talks are item number one on the markets agenda, and Chinese President Xi Jinping said on Friday that Beijing wants to work for a trade deal with the United States. He also said China is not afraid to “fight back.”

Flash PMI data also is due to come in the U.S., as is the November reading of consumer sentiment.

Bridgewater Associates, the world’s largest hedge fund, has put an options bet on, of over $1 billion, that stock markets will fall, the Journal reported.

After the Dow industrials DJIA, +0.15% fell on Thursday for the third straight session, U.S. stock futures ES00, +0.16% were higher on Friday.

Chart of the day 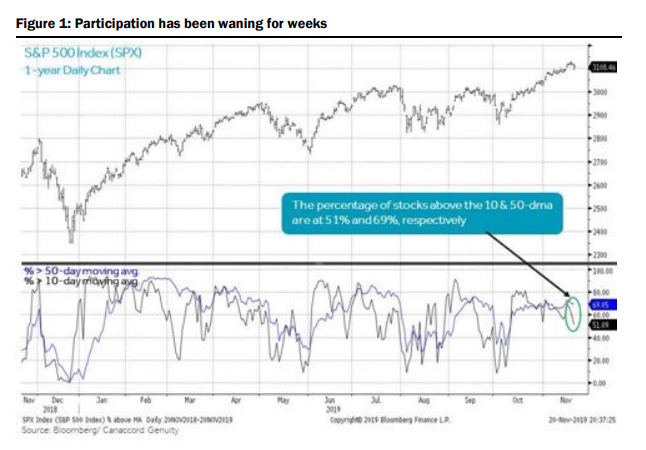 Tony Dwyer, strategist at Canadian broker Canaccord Genuity, says the stock market’s internals aren’t healthy. The percentage of S&P 500 SPX, +0.18% components above their 10-day average is just 50%, and, through Thursday, decliners have outnumbered advancers on the New York Stock Exchange for 8 of the past 11 days. “Many have been so focused on the record highs and strategist targets that they have ignored the overbought condition and internal deterioration,” he said.

Researchers have identified the first fossil evidence of polar dinosaurs.

Hazing for students at Cornell University’s mock trial team consisted of finishing a sheet of pizza, a 30 rack of beer, a fifth of liquor and a “mystery condiment” such as Nutella or frosting. They also were subjected to being “continually interrupted.”