Voting by mail may delay the results of November's U.S. presidential election for days or weeks, hurling markets into disarray, according to the investment bank Morgan Stanley.

Mailed-in ballots are expected to be more numerous than ever in 2020 as social-distancing guidelines aimed at slowing the spread of COVID-19 leave older Americans – typically among the most reliable voters – reluctant to go to the polls in person.

Mailed ballots typically require longer to tally and arrive on a less-regular schedule, making it difficult to determine results on Election Day itself, as has become the norm in the U.S.

“In our ‘Election Week’ base case, a reliable result won’t be available for at least a few days,” wrote a team of Morgan Stanley strategists led by Michael Zezas. “If polls tighten and indicate the final vote will be close, our base case could shift to ‘Election Month.’”

Former Vice President Joe Biden currently leads President Trump by 7.1 points, according to an average of national polls compiled by RealClear Politics. The margin in key battleground states that determine a victor in the Electoral College is narrower, however, at 3.2 points.

Not only did Trump win an Electoral College victory in 2016 despite losing the popular vote by nearly 3 million, it's possible that he and Republicans take the lead on election night, then lose it to Democrats as mailed ballots are counted in all states.

Thirty-five percent of swing-state voters surveyed by Morgan Stanley said they expected to vote by mail in November. In 2016, some 20% of all votes were cast by mail. Mail-in votes tend to skew Democratic. 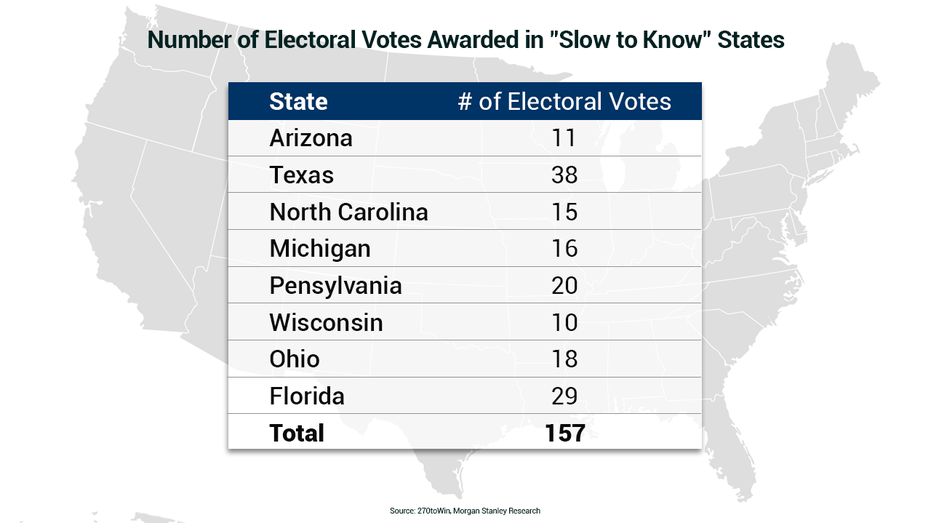 A flood of mail-in ballots and a tight race would create an “Election Month” scenario, which the strategists think currently has a 20% chance of occurring.

Such an outcome would lead to policy uncertainty and weigh on consumer confidence, much like what happened in 2000, when issues with Florida ballots left the presidency hanging in the balance for weeks, they said.

Prolonged uncertainty would cast a cloud of doubt over the future policy paths for Big Tech, financials, energy and health care stocks in particular.

To hedge against such uncertainty, Morgan Stanley says buying volatility-linked securities is the “obvious answer,” but warns that markets have begun pricing in risk premium during election week.

Volatility-linked securities for October and December have very little price premium and are "worth owning as hedges,” they wrote.